Even if the White House does not see turning Saudi Arabia into a "pariah" as a viable option, more lawmakers in his party seem to think it is not only a viable option but also a strong moral obligation. 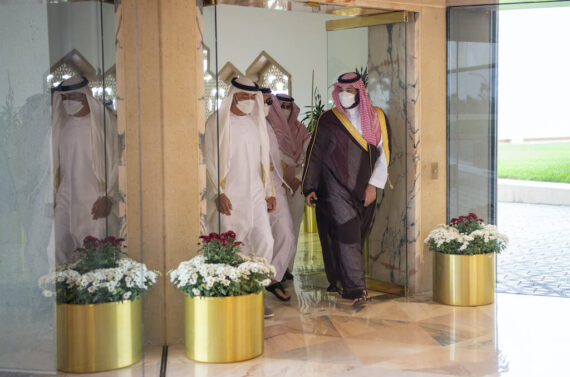 As a presidential hopeful in November 2019, Joe Biden addressed the Jamal Khashoggi murder case and Yemen conflict. He vowed to treat Saudi Arabia as a global “pariah”. Biden was participating in a Democratic primary debate and speaking to a crowd at odds with then-President Donald Trump’s unconditional support for Saudi Crown Prince Mohammed bin Salman (MbS). However, as president, he has made it clear that his administration has no plans to recognize the oil-rich kingdom as anything close to a pariah.

Last month, Saudi Arabia’s deputy defense minister Khalid bin Salman, who is MbS’s brother, paid a visit to Washington. This marked the highest-ranking envoy from Riyadh to visit the American capital in the post-Trump period. The minister met with national security adviser Jake Sullivan and other top US officials including Secretary of Defense Lloyd Austin, Chairman of the Joint Chiefs of Staff General Mark Milley, and US Undersecretary of Defense for Policy Colin Kahl.

The talks focused on strengthening the US-Saudi partnership. The two sides discussed various regional files such as Yemen, Iran, and Lebanon. Notably, because of increasingly advanced Houthi drone attacks against Saudi Arabia and Shi’a militias stepping up their drone strikes against US military bases in Iraq, Iran-backed groups’ regional conduct is of growing concern to both the US and Saudi Arabia.

Read: Biden Places MBS under Pressure, But Keeps Him for the Future

Against the backdrop of Biden’s decision earlier this year to not impose sanctions on MbS over the US government’s findings on the Khashoggi file, some have criticized Biden for failing to uphold some of his campaign pledges. Khalid bin Salman’s warm reception by Biden administration officials led to some voices in the human rights community expressing outrage, especially given the fact that MbS’s brother is purportedly linked to the Khashoggi murder case.

In Biden’s first major foreign policy speech as president, he announced the end of US support for the Saudi-led military coalition’s “offensive” operations against Yemen’s Houthi rebels.

But the White House’s conclusion is that the US has way too many strategic interests in working with the Saudis to abandon this decades-old partnership over human rights issues. That said, Biden has not maintained Trump’s exact approach to working with Saudi Arabia.

The administration suspended the sales of GBU-39 small diameter and Paveway IV smart bombs to Riyadh. In Biden’s first major foreign policy speech as president, he announced the end of US support for the Saudi-led military coalition’s “offensive” operations against Yemen’s Houthi rebels. However, it is not clear how the administration exactly defines “offensive”, which has given Biden’s administration some wiggle room on this front.

Read: Biden’s Recalibration of Saudi Relations Could Spell the End of MBS

On February 16, Biden’s team sent a message when the White House’s press secretary Jen Psaki first stated that the new administration intends to “recalibrate” Washington’s relationship with Riyadh. Then, when asked about Biden possibly speaking with MbS, she said: “Part of that is going back to engagement counterpart-to-counterpart. The president’s counterpart is King Salman, and I expect that at an appropriate time, he would have a conversation with him. I don’t have a timeline on that.”

Thus far, Biden has not directly spoken with MbS, nor has Blinken. This contrasts with how Trump continued speaking directly with MbS following the Khashoggi murder (of course while boasting about giving him cover when congressional pressure was building up in the aftermath of Khashoggi’s murder) and how Pompeo was not deterred from visiting the Crown Prince in Saudi Arabia after the killing took place in October 2018.

Some observers believe that the change in the US leadership has resulted in some imprisoned Saudi activists, including Loujain al-Hathloul, Samar Badawi, and Nassima al-Sada, being released. “Prince Mohammed views the decision to release [Hathloul] as an attempt to belatedly engage the new administration, whose strident tone on human rights issues in its early weeks of office has all but conditioned a working relationship with Riyadh on righting the wrongs of the Trump years,” wrote The Guardian’s Martin Chulov.

Biden seeks to “convert [the US-Saudi relationship] from an all-weather partnership that mimics an alliance to a conditional partnership, which advances US interests and gives the US scope to pressure Saudi Arabia on human rights,” as Samuel Ramani, a doctoral researcher at Oxford University, told Politics Today. “Biden’s actions, such as releasing the Khashoggi report, announcing the suspension of US offensive support for the Saudi-led military intervention in Yemen and withdrawing some additional Patriot missile defense batteries from Saudi Arabia, reflect this aspirational shift.”

Although Biden is at odds with a growing number of more progressive members of his party who may view Riyadh as deserving “pariah” status, the current administration does not believe that the Washington Post writer’s killing or Saudi conduct in Yemen are reasons to walk away from the US’s partnership with the kingdom.

Given the extent to which MbS and Trump grew close, Biden saw a need for rhetoric that would set him apart from Trump.

In 2019/2020, when Biden was seeking the Democratic nomination, he made dramatic statements about Saudi Arabia for reasons pertaining to the Democratic Party’s politics. Given the extent to which MbS and Trump grew close, Biden saw a need for rhetoric that would set him apart from Trump. But it was not in accordance with any realistic expectation of his foreign policy. As Ramani explained, “Biden clearly overshot during the campaign with his label of Saudi Arabia as a pariah and those comments can be seen as a way of contrasting himself from Trump to appeal to the progressives in the Democratic Party.”

Ultimately, realpolitik has settled in. Biden has moved past rhetoric promising to “revitalize our national commitment to advancing human rights and democracy around the world”. From the Oval Office, Biden must deal with the practicalities of conducting foreign policy which, in Biden and virtually all his predecessors’ views, require maintaining relationships with governments that don’t share liberal or western values.

This is not only evident in the US-Saudi relationship. The Biden administration worked closely with Egypt amid the 11-day Gaza-Israel war of May 2021. Additionally, the Biden administration’s tepid response to the Tunisian president’s power grab last month tells us that even if the North African country becomes more authoritarian, the US leadership will in all probability still accommodate Kais Saied.

Moreover, even long before the Trump era, countless US presidents worked closely with an endless number of authoritarian leaders across the world, even some with more blood on their hands than MbS. It is fair to say that Biden’s approach is to be expected from any American president and his campaign rhetoric suggesting otherwise was not genuine.

But even if the White House does not see turning Saudi Arabia into a “pariah” as a viable option, more lawmakers in his party seem to think it is not only a viable option but also a strong moral obligation. The question of how much realpolitik should be shaping the Biden administration’s approach to Riyadh will likely become the source of more intense debate within the Democratic Party, especially after MbS ascends to the throne and becomes the King of Saudi Arabia.

As Psaki said, the administration is involved in “engagement” with Saudi Arabia’s leadership on a “counterpart-to-counterpart” basis. So, if there is a King Mohammed in Riyadh before January 2025, will Biden speak directly to him? It is safe to assume so.