World governments are likely to experience that their financial powers continue to be challenged by bitcoin-like cryptocurrencies. 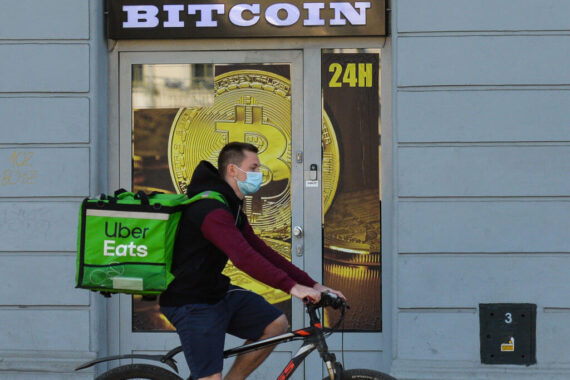 When bitcoin first emerged in 2009 in the aftermath of the greatest financial crisis in human history in 2008, its utility was questioned and scrutinised. Today, the price of bitcoin stands at $47,000 after it rallied from $5,000 when coronavirus lockdown hit the global economy back in March 2020. This is 10x value unfold in less than a year. The spectacular rise in value boggled the minds of many including investors, regulators, and bankers.

So why bitcoin is rising? Since the financial crash of 2008, questions were raised about the future of the US dollar as the global reserve currency. The quantitative easing policy adopted by the Federal Reserve Bank was described by many economists and financiers as the recipe to the destruction of the US dollar exorbitant privilege and its status as the global reserve currency.

Simply put, no one wants to save and invest their wealth in a currency that constantly loses its value to inflation. Loss of wealth that happened to many countries and investors that save in dollars is significant. The dollar had an average inflation rate of 1.64% per year between 2007 and today, producing a cumulative price increase of 25.63%.

Investors who have to deliver profits to their clients needed to hedge against dollar inflation. Thus, an influx of institutional investors lined up to buy bitcoin as they saw it become the gold standard for the digital era. The limited supply of bitcoin at 21 million coins means it is inflation-proof.

Scarcity of bitcoin operates as the catalyst for the increased demand on bitcoin and thus its price increases against the dollar. Therefore, institutional investors such as MicroStrategy and Guggenheim Partners fund managers increased their portfolio holdings of bitcoin and offered related financial services to their clients.

Not only institutions are lining up to buy bitcoin, but also retail investors have increasingly shown greater interest in the coin and used it to hedge against losses to their savings in dollars due to inflation and to trade it. Companies such as PayPal, Square, and Visa have allowed or about to allow their customers to deal in bitcoin and used that to boost their payment solution for their customers which increased the number of retail investors who got into bitcoin.

The ongoing changes in the global economy are also part of the reasons for bitcoin rise. The Bretton Woods system of a gold-pegged dollar made the US (which owned 80% of world’s gold reserve at the time) the world leading economy. Eventually, to maintain the financial privilege, the US economy deindustrialised and became a service and finance-based economy.

With China’s rise, and due to security concerns around the safety of its supply chains, the US is interested in getting industry back onshore. Devaluing the dollar helps achieve such strategic objective as the US seeks to reclaim its domestic manufacturing capabilities.

The economic dynamic of bitcoin is simple. As USD value decreases, conversely, the price of bitcoin increases.

Overall, the economic dynamic of bitcoin is simple. As USD value decreases, conversely, the price of bitcoin increases. The increased demand helps institutional investors save their treasury, increase their profits, and adapt to technological changes in digital payment systems using blockchain-enabled technologies such as bitcoin.

Economy is not the only reason for bitcoin price rise. The global power struggle between China and the US is at play as well. At first, the Chinese government hailed bitcoin and its underlying technology, blockchain, and deemed it a way to undermine the dollar hegemony. However, political concerns around the potential use of bitcoin for capital flight and to change the power dynamic between wealthy Chinese and the state undercut such view. Additionally, China saw bitcoin rise as an opportunity to achieve its strategic objective of becoming a greater power broker in global economy.

The founder of SpaceX and Tesla Motors, Elon Musk, while delivering a speech at the Satellite 2020 Fair in Turkey. Photo by Yasin Öztürk. Anadolu Agency.

Thus, China tried to exercise regulatory control over Chinese holding bitcoin by banning cryptocurrencies. However, the Chinese crackdown on bitcoin led to more Chinese investments in the coin as it proved the need for non-government-controlled assets.

Today, China is a dominant actor in bitcoin mining. This is due to the cheap cost of electricity, mining equipment, and land. Furthermore, the strong capital controls exercised by China lured many Chinese who cannot move money abroad to bitcoin. Since China could not beat bitcoin, it decided to play its own blockchain game.

Globally, by deploying the digital yuan, China aims to offer foreign governments an opportunity to save and invest in a currency other than the dollar.

Hence, in April 2020, China announced its commitment to launching the digital yuan which would use blockchain technology. The aim of such move was to maintain the power of the Chinese state over the wealth of the nation, to reap the benefits of the new technology to reduce transactions cost and time, and to preserve the domestic power of the Chinese Communist Party.

Globally, by deploying the digital yuan, China aims to offer foreign governments an opportunity to save and invest in a currency other than the dollar. This shall help, according to the government view, boost the status of the yuan as a global reserve currency. Over the past few years, the yuan value has been appreciating, and China continues to implement policies that encourage its internationalisation.

Bottom line, China is happy the USD is losing its status as the global reserve currency which was used by the US to exercise power globally over the past seven decades. Furthermore, China’s mind is open to technological changes and is trying to harness the blockchain technology to boost the global financial status of the yuan, which is expected to help China materialize its goal of becoming the world’s top economy by 2050 and contribute to the success of its Belt and Road Initiative.

From the US point of view, the Federal Reserve Bank continues to signal a quantitative easy policy via trillions of dollars of stimulation packages. In 2020 alone, $10 trillion were injected in the US economy to offset COVID19 depression.

The Biden administration promised more stimulus packages and an increase in the minimum wage to $15, which is expected to inflate prices. Therefore, American and international investors and retailers alike have a low level of confidence in the Fed’s willingness to protect the value of the dollar.

Is all bitcoin story gloomy? Of course not. Despite the rosy picture bitcoin enthusiasts show, mass adoption of the coin lags due to several concerns about the high volatility of bitcoin prices and the impact of bitcoin mining on the environment. However, on the long run, as more institutional and retail investors adopt bitcoin, the price will stabilise. Furthermore, mining bitcoin using green energy will become viable.

Taxing bitcoin holding is another issue due to the anonymity enjoyed by the holders. However, many governments have figured out ways to tax bitcoin holders and mechanisms continue to be developed to achieve such objective.

Read: The Transformation of Money and Blockchain Technology

Lastly, a potential ban on bitcoin by governments worries potential investors and retailers. However, the decentralised nature of bitcoin means it is proved against potential government bans. Furthermore, the geographical neutrality of bitcoin means that it will always be moveable and thus valuable.

In conclusion, governments need to reclaim investors and people trust to push them to continue to use national currencies and abandon bitcoin. Incentives such as price stability remain to be unlikely in the medium term as governments run the money-printing machine to stimulate their COVID19-depressed economies.

As monopolistic powers that operate in increasingly decentralised economic structures, world governments are likely to see their financial power continue to be challenged by bitcoin-like cryptocurrencies.

Also Read
Is a Common Currency Backed by the Gold Standard Achievable?