A new Muslim community should be a counterforce to the exclusionary trends of today's world, protecting Muslims worldwide, advancing their rights, and advocating for universal justice. 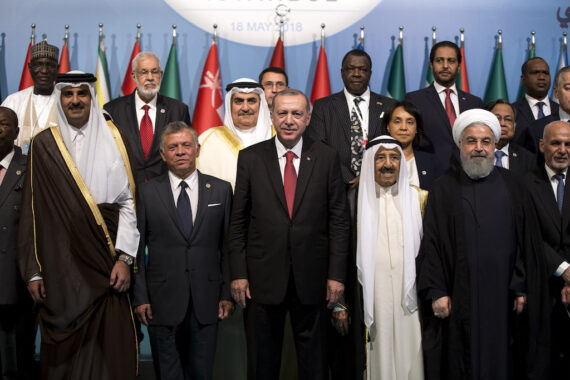 Within a context of international Islamophobia and the persecution of Muslim populations in many countries, it has become more and more commonplace amongst Muslims to lament the lack of unity in the ummah, the global community of believers.

Many Muslim rulers seem all too ready to neglect solidarity with Muslims for the sake of narrowly defined national interests.

Certainly, the most prominent example is Palestine. Despite unrelenting Israeli colonization and the entrenchment of apartheid, several important Muslim countries have taken the bold step of normalizing relations with Israel, and appear to be abandoning the Palestinian cause.

Unfortunately however, Palestine is far from the only example. A number of Muslim countries in Southeast Asia have pushed back boats of Rohingya refugees fleeing Myanmar.

Meanwhile, the governments of many Muslim countries have shied away from criticizing China for its cultural genocide of the Uyghur people in Xinyang, where Muslims are openly targeted for imprisonment and “re-education” for praying, avoiding pork and alcohol, or fasting during the holy month of Ramadan.

Read: Islam, Colonialism and the Reaction Against Israel in Southeast Asia

Despite these violations, no Muslim state joined an initiative in July 2019, when 23 countries sent a letter to the president of the UN Human Rights Council demanding action against China.

Far from campaigning for the rights of Muslims, Muslim states sided with the oppressor.

Indeed, four days later, 27 member states of the Organization of Islamic Cooperation (OIC) signed a counter letter, praising “China’s remarkable achievements in the field of human rights,” and thanking it for its firm measures against “religious extremism.” Far from campaigning for the rights of Muslims, in other words, Muslim states sided with the oppressor.

However, the situation is not completely grim. In November 2019, Gambia, with the support of the OIC, filed a genocide case against Myanmar at the International Court of Justice (ICJ).

The case is ongoing, but the evidence of genocide committed by the Myanmar military is overwhelming, and the court has already ruled in favor of Gambia’s request for provisional measures.

Many historians note that, outside of the earliest days of Islam, the Muslim ummah has never truly functioned as a unified political entity as a result of the state-based international system being deeply entrenched. The ummah has always been predominantly a spiritual community of believers, not a political force.

Gambia, a West African country many thousands of kilometers away from Myanmar, took the case to the ICJ. This shows that Muslim countries can act in solidarity to advance the rights of Muslims, even when their national interests are not directly at stake.

Nevertheless, that does not preclude the possibility of creating a strengthened ummah, unified in the face of current challenges. The question is one of political will.

In this regard, the Gambia case is an important precedent.

The fact that Gambia, a West African country many thousands of kilometers away from Myanmar, took the case to the ICJ shows that Muslim countries can act in solidarity to advance the rights of Muslims, even when their national interests are not directly at stake.

What is needed urgently is a rethinking of what the ummah should look like in today’s world, and of the concrete framework and institutions that need to be built.

VIDEO: Why the Far-Right is Rising: Global Commonalities

International legal standards protecting the rights of refugees and other migrants are sorely inadequate, with millions – more and more of whom are Muslim – unable to secure protection from human rights violations.

Liberal citizenship is also being weakened as Islamophobic policies in many countries target Muslim minority communities for exclusion. A new, modern ummah can and should act as a counterforce to these trends, and put forward a more inclusive form of citizenship: a Muslim citizenship that would allow all believers access to safety.

It is proposed that Muslim countries should issue common travel documents, providing freedom of movement. Similar to the EU, any citizen would be allowed to enter, reside, and work in any other Islamic bloc country, with equal rights and duties as citizens of that country.

Refugees from Muslim countries would automatically have the right to protection, not as a refugee with the limited rights that often entails, but as a citizen of the ummah. Borders within the Islamic bloc would, for most practical purposes, cease to exist.

This is the case in the EU, and while progress has not been linear (and the COVID-19 pandemic has resulted in some steps back), it is clear that the EU is moving toward a form of common citizenship that will transcend individual states.

Read: French Islam: How France and the UAE Partners to Create a State Approved Religion

Refugees from Muslim countries would automatically have the right to protection, not as a refugee with the limited rights that often entails, but as a citizen of the ummah. Borders within the Islamic bloc would, for most practical purposes, cease to exist.

This is the case in the EU, and while progress has not been linear (and the COVID-19 pandemic has resulted in some steps back), it is clear that the EU is moving toward a form of common citizenship that will transcend individual states.

What is needed urgently is a rethinking of what the ummah should look like in today’s world, and of the concrete framework and institutions that need to be built.

There are potential pitfalls to this proposal, not least that Islamophobic governments could use it to advance even more exclusionary policies towards Muslims.

Despite this being a serious concern, Muslim countries should not refrain from taking steps towards greater unity simply because of the abusive practices of other states.

Countries that wish to exclude Muslims will, unfortunately, find ways to do so. The first obligation of the Islamic bloc should be to protect other members of the ummah, and to provide them with a safe haven if necessary.

Providing for freedom of movement is only half of the picture, since it would not be able to protect Muslim minorities who are unwilling or unable to leave their country of nationality.

Therefore, the ummah must have effective mechanisms to highlight violations of the rights of Muslims and put effective pressure on abusive governments.

Attempting to continue stale debates on the alleged lack of compatibility of the international human rights regime with Islamic religious laws and values is pointless. Even worse, it plays into the Islamophobic narrative that Islam is incompatible with modern norms.

The undeniable reality is that the vast majority of Muslims everywhere by and large accept the universal validity of international human rights standards.

Contrary to the wishes of their people, many Muslim governments have spent far too much time and energy at international meetings arguing against universal standards in a transparent effort to use religion to deflect criticism of their own oppressive practices.

This has damaged the credibility of those governments and, in the eyes of many, Islam itself.

The human rights discourse is an important element of current international relations and will remain so in the foreseeable future. Muslim governments need to engage with the human rights regime in a credible manner, and the first step is to recognize that the human rights situation in many Muslim countries remains dismal in numerous aspects.

However, at the same time, they must be willing to accept criticism of their own human rights records, and show a willingness to make meaningful efforts to improve.

The call for a social movement

Whether the OIC is the appropriate forum to advance these proposals is an open question. Of course, though the OIC purports to speak for the ummah, it is at its core a grouping of sovereign states, which, as the UN, use international organizations to further their national interests.

The KLS brought together not only heads of states, but also Muslim scholars and community leaders to engage in multifaceted dialogues on the issues facing the ummah today.

Though the KLS ended with few clear commitments other than to continue the dialogue, its potential importance should not be underestimated.

This importance rises, in particular, from the fact that it is an alternative to the state-dominated framework of the OIC. This is vital, since Muslim unity is too important to be left to governments.

As institutions, governments have difficulty thinking in transnational terms, and they rarely consider any proposals for real change without a sustained demand for a change in direction from their people.

Muslims should therefore form a transnational social movement to debate the ideal form a modern ummah should take and to encourage governments of Muslim-majority countries to advance towards meaningful unity.

Inclusiveness is vital in this international dialogue, which should be held at all levels of society.

A new ummah can and should be a counterforce to the exclusionary trends we see in our world today, protecting Muslims worldwide, advancing their rights, and advocating for universal justice.

This is not just an obligation in the sense of modern law, but a religious one, and it is the duty of all believers to demand that governments fulfill it.