Candidates for Turkey's Local Elections to be Announced Soon

Change is expected in the AK Party candidate profiles that more than half the candidates will probably be new names. For Istanbul, the candidate of AK Party is finalized: Binali Yildirim - the former and last Prime Minister of the parliamentary system. 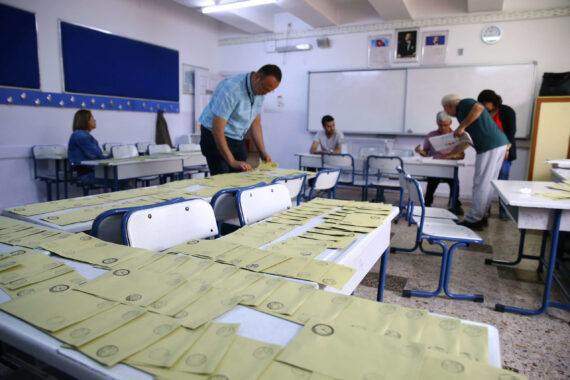 Polling clerks are seen at a polling station during the parliamentary and presidential elections in Ankara, Turkey on June 24, 2014. Anadolu Agency

Turkey’s local elections in 2009 will be the ‘first’ local elections in the new presidential system, both President Erdogan and his political competitors are going through a rigorous process making their final tunes in deciding the candidates of local administrators. It was recently announced by the party spokesperson that the candidates for about 40 municipalities have been decided and now waiting to be announced by the President Erdogan tomorrow.

President Erdogan and his party have still an advantage over their competitors since the last elections as the recent public opinion polls reflect. The AK Party attached importance to polls (temayül yoklaması) in deciding the candidates. In these polls two criteria are important: the first is how candidates perceive success and the second what would be the voting inclination of voters towards candidates.

Like all local elections in Turkish political history, three cities are the most important battle grounds in the competition: İstanbul, Ankara and İzmir. Experts argue that the results in these major cities will have an important impact on the next presidential elections

Change is expected in the AK Party candidate profiles that more than half the candidates will probably be new names. For Istanbul, the candidate of AK Party is finalized: Binali Yildirim – the former and last Prime Minister of the parliamentary system who has gained esteem through his former administrative responsibilities. In Ankara, polls show that Mehmet Ozhaseki – previous Minister of Environment and Urban Planning – who has a considerable experience in local administrations (as major of Kayseri between 1998-2015)- will be the final candidate. For Izmir the mentioned name was Mahmut Ozgener – 38th President of Turkish Football Association – who was an important political figure in İzmir, but sources close to the party tell that the AK Party’s candidate for İzmir will be Nihat Zeybekci, former minister of economy.

President Erdogan’s main competitor, Kemal Kilicdaroglu – head of CHP (Republican People’s Party) – has long been flirting with Meral Aksener’s Iyi Party to come up with a common candidate in major three major cities Istanbul, Ankara, and Izmir in order to consolidate opposition votes against the AK Party candidate as they are aware that one victory in Ankara or Istanbul against AK Party will have a psychological effect.

On the other hand, People’s Alliance shows glimpses of survival even though both leaders, Erdogan and Bahceli, publicly announced before that there would be no alliance in the local elections. However, both leader got together in the presidential palace recently and some say that they reached to an understanding for a partial agreement on some cities. President Erdogan wants the support of MHP in Istanbul, Ankara and Izmir in return for supporting MHP’s candidates in three other cities. HDP (Peoples’ Democratic Party) which has been losing public support over the past five years, will apparently support CHP’s candidates in the western cities but it will depend on the candidate’s profile. CHP will be facing a grave dilemma of with whom to form an alliance: Turkish nationalist Iyi Party or Kurdish nationalist HDP?