An African perspective is needed to demystify all myths, fears, and misconceptions surrounding the narrative of African migration. It is not only emigration from Africa to abroad that matters but also foreign immigration to Africa. 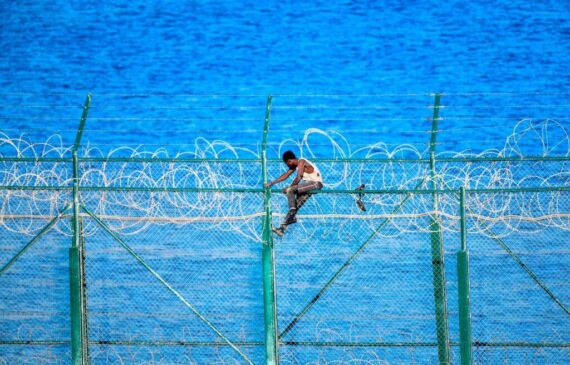 A migrant forces his way into the Spanish territory of Ceuta on August 30, 2019. Over 150 migrants made their way into Ceuta after storming a barbed-wire border fence with Morocco. Photo by Antonio Sempere, AFP via Getty Images

The limited understanding of African migration continues to hinder effective policies, far from addressing the current lived realities and migration drivers. Often, Africa is negatively represented as a continent of mass migration to Europe, lacking nuance and depth to the existing drivers and patterns.

According to the United Nations Department of Economic and Social Affairs Population Division (2020), Africans migrate more within the continent than overseas. According to the Africa Migration Report, African migrants comprise no more than 14 percent of all global migrants. An African perspective is needed to demystify all myths, fears, and misconceptions, especially during this pandemic.

Prior to COVID-19 pandemic, socio-economic conditions, climate change, and internal conflicts served as significant push factors for most African migrants. However, the sanitary crisis has resulted in unprecedented socioeconomic impact across the African continent and brought a new driver for a wave of migratory flows. The restriction on human mobility and other measures imposed to tackle the pandemic have impacted the overall economic activities and livelihoods. The situation became alarming for the vulnerable persons in the African countries.

In parallel, as internal conflicts intensify in the Sahel, the region’s socio-economic conditions worsened, and hundreds of thousands of people are awaiting the opportunity to migrate for a better future inside the continent or through Morocco on to the European continent.

Despite the regularization of 50,000 migrants during the two campaigns of 2014 and 2016 launched by the Moroccan government, estimated numbers of irregular migrants in Morocco demonstrate a significant increase of migrants without legal status.

However, it is important to note that the exact percentage of migrants who have been smuggled and trafficked could not be calculated at the national level, whether for those crossing the perilous Mediterranean and the Atlantic, the desert, or those crossing borders in Ceuta and Melilla.

The general trend of migrants opting to reach Europe through Morocco are men and women under the age of 35 and more recently young couples. Migrants mainly from Congo Brazaville, Guinea Conakry, Ivory Coast, Senegal, Cameroon, Mali, Liberia, Nigeria, Gambia, Eritrea, Sudan, Tchad seek to reach Europe by landing on the Moroccan coasts or through the borders of Ceuta and Melilla.  Sometimes, migrants could be minors, especially from Guinea Conakry and Senegal.

“I was working as a maid before the pandemic, I tried to save money to pay my journey to Spain, but I couldn’t work during the confinement, it was challenging and hard to cover basic needs ( food and rent ), I was forced to do prostitution to get some money for a living.”

In search for a better future, migrants have been forced to choose dangerous and risky routes to reach Europe through Morocco. As a result, many migrants are victims of human trafficking networks. For example, a young 26-year-old Senegalese migrant living in Rabat, Morocco, told Politics Today:

“I was working as a maid before the pandemic, I tried to save money to pay my journey to Spain, but I couldn’t work during the confinement, it was challenging and hard to cover basic needs ( food and rent ), I was forced to do prostitution to get some money for a living.”

African migrants staying in a refuge in the al-Karam region of the city of Misurata in Libya are seen before they are taken to different refuge camps on May 9, 2015. Photo by Hazem Turkia, Anadolu Images

African countries are most affected by poverty, famine, desertification, and various deadly pandemics, resulting in a high percentage of Africans deciding to migrate and are forced displaced.  Due to the failure of effective policies to address the root causes of irregular migration, migrants are victims of traffickers and smugglers along the routes. According to the Global Report on Trafficking in Persons 2020, migrants are at more risk for human trafficking, disappearance, and loss of life.

As an example, a migrant recounts his dangerous and hell-like journey from Cameroon to Morocco stating to Politics Today that:

“From the beginning of the journey, you are the target of organized criminal groups, you can come across smugglers who take all your money, torture you, and ask you to call the family to send them money so they can free you. I faced the same treatment along the route, it’s Bis-Repitita, in front of me. Two migrants lost their lives as a result of multiple tortures.”

The African countries cannot curb these problems without good coordination between different institutions and adequate support for local development efforts. Without shared responsibility, African countries will not be able to put in place a model that ensures the prevention of irregular migration and the assistance and protection of migrants. In addition, African countries also have to cooperate in developing initiatives to realize the vision of Agenda 2063 of an integrated Africa. The African Union revised Migration Policy Framework (MPFA 2018-2030), and the African agenda on migration was adopted in 2018. In his capacity as an African leader on migration, King Mohammed VI, through the African Agenda on Migration, proposed the creation of The African Migration Observatory in 2018. The official inauguration was under the African Union’s aegis on 18 December 2020 in Rabat, Morocco.

The African Migration Observatory is envisaged to develop a mechanism of collecting, analyzing, and sharing information between members to promote controlled management of migration flows. The Observatory will generate geographically balanced information on migration that responds to the continent’s needs in terms of factual management of the phenomenon.

It is a real challenge for African Union to develop autonomous institutions, such as the African migration observatory. As such, the implementation of these policies needs to be funded by African funds. Efforts should be made to ensure the complementarity of financial and technical resources between African countries.

They also need to improve the coordination control systems to improve data collection and information exchange. But, in the scarcity of national migration observatories, the African Union members have to create national institutions as focal points of the African Migration Observatory.

It is crucial for institutions with common missions and goals to not duplicate efforts. As a new structure, The African Migration Observatory has to create synergy by making the necessary adjustments and articulations in an inclusive approach of all existing initiatives such as the African Center for the Studies and Research on Migration, the Continental Operational Centre, and the Pan-African Statistics Institute.

Moving forward, a holistic approach and interagency coordination should ensure the effective implementation of the African Migration Observatory, as per the African Agenda on migration and the Agenda 2063. In addition, the narrative of African migration has to be challenged and contextualized. It is not only emigration from Africa to abroad (Africans and foreigners) but also foreign immigration to Africa from various countries, including the African diaspora and internal mobility within the continent.

Ali Zoubeidi holds a Ph.D. in Security Studies from Hassan I University, and an MA in International Studies and Diplomacy from Mohammed V University. He is a research fellow at the Settat University Security Dynamics Research Center. Dr. Zoubeidi is a senior consultant for social policies and interventions in smuggling of migrants, human trafficking, border security, transnational organized crime, security reforms, and human rights at the national and international level.