China in the Balkans: More than Infrastructure Projects

China is stepping on Europe's nerves by investing in the Balkans. 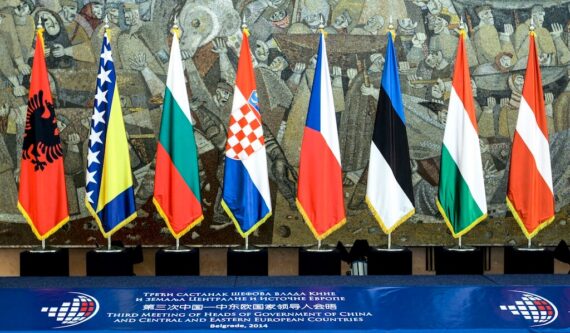 Flags of the countries which attend the Third Meeting of Heads of Government of China and Central and Eastern Europe are displayed at the entrance of the Palace of Serbia in Belgrade on December 16, 2014. Photo by Samir Yordamoviç. Anadolu Agency.

China’s investments in Balkan countries that are not members of the European Union keep growing. The region remains stuck in the EU’s waiting room, as well as in the Euro-Atlantic sphere of influence, but is using every opportunity to deepen its economic, political, and, to a certain extent, cultural ties with Beijing.

The so-called Western Balkan states – all of them located in the central and southern parts of the Balkan Peninsula, not in the West – have always attracted the interest of the regional actors, Russia, Turkey, and the European Union. The United States, as the major global power, traditionally has the last say in the coal-rich region. Not so long ago, China, through its Belt and Road Initiative (BRI), has expended its partnership with Albania, Bosnia and Herzegovina, Montenegro, North Macedonia, and Serbia.

The BRI, launched in 2013 by President Xi Jinping in Kazakhstan, aims to connect Asia with Europe and Africa through major infrastructure projects, trade facilitation, financial integration, and cooperation in other areas. In the Balkans, Beijing is mostly interested in infrastructure and energy.

According to the American Enterprise Institute, China’s investments and contracts in Bosnia and Herzegovina, Montenegro, North Macedonia, and Serbia amounted to $14.6 billion from 2005 to 2019. The amount is relatively low, given the fact that the European Union still accounts for more than 70% of the overall direct investment in the region. On the other hand, China’s share in the Balkan countries accounts for only 5.7% of the overall trade in the region.

VIDEO: China’s $17 billion plan to build a Canal through Europe

There are, however, fears that the EU could eventually lose its influence in the region. North Macedonia’s president Stevo Pendarovski has recently emphasized that if the EU appears disengaged in the Balkans, other countries would step in. “When you are absent, then the strategic void will be filled by somebody else. Everybody knows whom we are speaking about,” he said.

Back in 2017, Federica Mogherini, an Italian politician who served as High Representative of the European Union for Foreign Affairs and Security Policy, warned that the Balkans can “easily become one of the chessboards where the big power game can be played.”

The game apparently already started, although at this point the West does not force the Balkan countries to pick a side. Indeed, Washington and Brussels have mechanisms to reduce the Chinese influence in the region that is heavily dependent on the European Union. One call from the White House could easily expand the American de facto control over the Balkans, and reduce the Chinese economic presence.

The Washington Agreement, signed by Prime Minister of Kosovo Avdullah Hoti and the President of Serbia Aleksandar Vučić on September 4, 2020 at the White House, clearly demonstrates who the “real boss” is in the Balkans. The agreement committed Belgrade and Pristina not to use equipment supplied by “untrusted vendors” in their telecommunications networks.

Read: How Turkey and Saudi Arabia Compete in the Balkans

It remains to be seen if Serbia will have to eliminate China’s tech giant Huawei completely – with whom Belgrade signed a strategic agreement in 2017 – from the ongoing installation of fixed broadband infrastructure, including the 5G network. For now, the country manages to relatively successfully balance between the West and China.

Serbia, the region’s largest economy that accounts for 44% of regional GDP, already hosts several large Chinese equity investments, most notably the Chinese Hesteel Group’s 2016 purchase of the Smederevo steel mill that was previously owned by the American company U.S. Steel. In addition, China is also involved in some huge infrastructure projects in Serbia, namely the construction of Corridor X, railway and highway sections, Corridor XI highway, as well as Kostolac thermal power plant.

The very fact that the U.S. companies operating in Serbia sold their assets to China is a clear indication that Beijing’s business in the country has Washington’s tacit support, at the very least.

Beijing also owns copper-gold assets in the Serbian town of Bor, which the Chinese Zijin Mining company purchased from the American Freeport-McMoRan Inc. in 2019. The very fact that the U.S. companies operating in Serbia sold their assets to China is a clear indication that Beijing’s business in the country has Washington’s tacit support, at the very least.

It is also worth noting that in June 2020 Serbia has publicly displayed six new military drones purchased from China. Such an action, however, did not seem to worry the United States, given that the Serbian Army has close ties with the Ohio National Guard. In addition, in 2019, Serbia, whose parliament declared armed neutrality in 2007, conducted 13 military exercises with NATO members. One of them, Montenegro, has also developed strong ties with China.

In 2014, the smallest nation in the Balkans took out a loan of nearly $1 billion from the Export-Import Bank of China for the construction of the Bar-Boljare highway that will link the Adriatic Sea and the country’s border with Serbia. The highway, which is located at one of the most challenging landscapes for building in the whole of Europe, will connect Bar, the largest coastal town and harbor in Montenegro, with the Serbian capital Belgrade.

The deal that Podgorica and Beijing signed provides a 20-year repayment period and a six-year grace period, while the first annual repayment of $67.5 million falls in July. So far, Montenegro has paid only 2% of the interest, but the country is already facing a debt crisis. Even though the Balkan state targets 2025 to be ready for E.U. accession, the bloc will not be paying the Chinese loan.

“Through its banks, China has provided the most favorable and competent loans, has offered reputable infrastructure contractors, and has given the possibility for domestic contractors as partners in these projects, allowing local enterprises to be involved,” wrote the former Montenegrin president Filip Vujanović for the Chinese Global Times.

Still, according to EU figures, Montenegro’s national debt could soar from 65% to around 80% of GDP once its loan from China is fully repaid.

North Macedonia is another Balkan state that relies on Chinese loans. Skopje has reportedly received both Chinese state bank loans and development cooperation funds. It was the first country of the “17+1” cooperation platform, formed between China and Central and Eastern European nations, to make use of the $10 billion credit line made available by China for infrastructure projects.

In Albania, Chinese investments are relatively modest, although Beijing is reportedly playing an active role in the country’s energy and mineral sectors. It is worth noting, however, that in 2015, Montenegro and Albania signed a memorandum of understanding with China’s Pacific Construction Group Co., Ltd. for the construction of the Adriatic-Ionian motorway. Once completed, the road will stretch along the entire eastern shore of the Adriatic and Ionian Seas, spanning the western coast of the Balkan Peninsula from Italy in the north through Croatia, Montenegro, and Albania to Greece in the south.

Despite such enormous projects, China’s role in the Balkan region remains overshadowed by the political actions of the Western powers. The People’s Republic still has very little cultural appeal to young people in the Balkans, and Beijing is unlikely to win the “culture war” against the West in the region. For the foreseeable future, Serbia, Montenegro, North Macedonia, Bosnia and Herzegovina, and Albania, are expected to remain in the Western geopolitical orbit, while every major Chinese investment in the Balkans will likely be a product of the lucrative deals between Beijing and Washington.