Turkey is one step ahead of Saudi Arabia in the Balkans, because Ankara promotes a version of Islam closer to Balkan Muslims, thanks to their common historical and religious heritage. 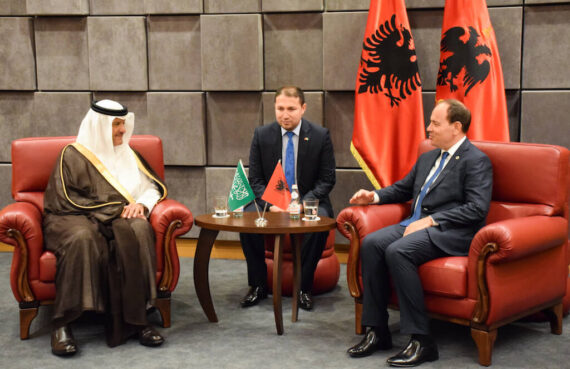 Ethno-religious diversity and the strategic location of the Balkans have always attracted global and regional actors. It is a geography where the interests of many neighboring and non-neighboring countries such as the EU countries, Russia, the U.S., Turkey, and the Gulf countries, intersect.

Although the Balkans are often associated with ethnic conflict, poverty, and corruption, the natural diversity, fertile lands, tourism opportunities and the peninsula’s location on the world’s major energy routes have mounted the interests of foreign actors in the region.

For Saudi Arabia, food security is a serious problem and, therefore, this is one of the most important reasons to maintain good relations with the Balkans. Turkey, on the other hand, uses its historical and cultural ties in order to exercise influence over various communities in the Balkans which for centuries were part of the Ottoman Empire, the ancestor of the modern-day Republic of Turkey.

To understand better the reasons behind the Turkish-Saudi competition in the Balkans, a brief history of the Saudi-Turkish ties is necessary.

The relations between Turkey and Saudi Arabia are complicated. Although up to the 2010s, the two countries maintained good ties, after the Arab Spring, bilateral relations have deteriorated.

The Arab Spring is not the only reason behind this dramatic turn. The collapse of Yugoslavia and the Bosnian War were important events for the Saudi-Turkish relations, and following these two events, the Balkans started to occupy a place in the foreign policy agendas of Ankara and Riyadh.

However, the involvement of Saudi Arabia with its Salafi version of Islam in the Balkans has endangered the influence of Turkey on the region’s Muslim communities. The rising economic and political influence of Riyadh in the Balkans later deepened the geopolitical and ideological competition between Ankara and Riyadh.

Following Turkey’s support for Qatar during the Gulf-Qatar crisis in 2017, which was only recently settled, the ties between Ankara and Riyadh became further strained. However, the real blow to the bilateral relations came after the Saudi journalist Jamal Khashoggi was assassinated in the Saudi consulate in Istanbul.

Turkey’s disclosure of the Saudi government’s role in the Khashoggi murder and the elevation of the issue to an international level was followed by Saudi Arabia’s semi-official embargo on Turkish products. In addition to the above, the two countries support opposing sides in the Libyan civil war.

Riyadh’s intentions for cultural, economic, and political influence in the Balkans are reciprocated by Ankara, which triggered a competition between the two.

Especially after the instability resulting from the Arab Spring in the Middle East, Saudi Arabia realized the need for new allies.

The Balkans, which needed foreign investments and which are well-known for their agricultural produce and arms industry, were considered a perfect choice. However, Riyadh’s intentions for cultural, economic, and political influence in the Balkans are reciprocated by Ankara, which triggered a competition between the two.

Saudi Wahhabism and Turkey’s Moderate Sunnism Clash in the Balkans

The cultural competition between Saudi Arabia and Turkey in the Balkans represents the clash between Turkey’s moderate vision of Islam and Saudi Arabia’s conservative vision, namely Wahhabism. Both countries use similar soft power tools such as investing in mosques, and providing religious education and scholarships for those who want to study in Turkey or in Saudi Arabia.

Both Ankara and Riyadh have invested in the restoration of war-torn mosques in Bosnia and Herzegovina. Construction, restoration, and maintenance of mosques in the Balkans is an important part of the religious competition.

For example, the restoration of mosques in Bulgaria is supported by Turkey. However, Saudi Arabia has influence among certain religious groups in Bulgaria, namely the Pomaks, that aggravated the competition.

Minister of Foreign Affairs of Turkey Mevlut Cavusoglu makes a speech as he attends the official opening ceremony of Balkans Research Centre at University of New York Tirana, during his official visit in Tirana, Albania on February 11, 2020. Photo by Fatih Aktas, Anadolu Images

The Turkish Directorate of Religious Affairs, the Diyanet, provides solid assistance to the Muslim communities and religious authorities in Bulgaria, North Macedonia, and Albania through its official advisers. For instance, some Bulgarian Muslim leaders receive financial support annually from the Diyanet, in addition to books on religion and the training of imams.

Turkey focuses its efforts on the promotion of the Turkish language and culture, and on preserving the historical monuments in the Balkans dating back to the Ottoman period through various programs and scholarships provided by the Turkish Cooperation and Coordination Agency (TİKA), Türkiye Scholarships (Türkiye Bursları), and the Yunus Emre Institute.

Ankara has also become a significant player in the region’s economy and infrastructure by building local schools and other public facilities. In addition, TİKA, which is engaged in the restoration of Ottoman historical structures, renovates schools, hospitals, and other facilities in Kosovo, North Macedonia, and other Balkan countries.

Turkish and Saudi Economic Influence in the Balkans

Economy is the easiest way to gain influence in the Balkans, where the investment percentages are low and the unemployment rates are high. These two reasons in particular push Balkan countries to re-establish their relations with Saudi Arabia and to strengthen ties with Turkey.

In the 2000s, Saudi Arabia provided various forms of aid to Muslims in Bosnia and Herzegovina and thus came to prominence in the Balkans not by using religion, but by the investments made by subsidiaries of Arab companies like the Al-Shiddi Group.

After the Arab Spring, Saudi Arabia realized the importance of new allies outside the Middle East, allies which can also function as reliable providers of agricultural products.

Both Turkey and Saudi Arabia use economic tools such as direct and indirect investments in the banking, tourism, hotel management, real estate, and agriculture sectors. Although Turkey has strong trade ties with the Balkan countries, nowadays Saudi Arabia is becoming a serious rival to Turkey.

Saudi Arabia-based companies have been buying up land in Bosnia, Serbia, and Bulgaria. The Al-Shiddi Group is building hotels, has undertaken an entire residential area project in Belgrade, the Serbian capital, acquired Serbia’s largest airline carrier, and has invested in FlyBosnia.

Saudi Arabia’s food insecurity has pushed Riyadh to make large investments in the agricultural sectors of the Balkan countries. Saudi-based companies are engaged in buying, investing, and operating farms, fertile lands, and other food-related facilities in Bulgaria, Bosnia, and Serbia. On the other hand, Turkey concentrates on telecommunications, transport infrastructure, banks, and the textile industry.

Turkey has shown an interest in the privatization of airports in Kosovo and Serbia. For example, the Turkish company Limak won a tender to run Pristina International Airport and participated in the privatization of both of Pristina’s two largest public companies, the Kosovo Energy Corporation (KEK) and the Post and Telecommunication of Kosovo (PTK), Kosovo’s national telecommunications company.

Turkey has a further advantage in the Balkans in comparison to Saudi Arabia thanks to its NATO membership, which offers Ankara the opportunity to support NATO candidates in the Balkans, for example, North Macedonia, and Bosnia and Herzegovina.

The presence of Turkish and Muslim minorities in the Balkan countries and the fact that Turkey sees itself as their defender is a premise that provides for more political influence.

Aydzhan Yordanova Alaydi is a lecturer at Ankara University and holds an MA in Middle Eastern Studies, Sakarya University.