Will Iran rise in the jetstream generated by the Chinese economy, or will it become a vassal literally fueling and facilitating China’s growing domination of Asia? 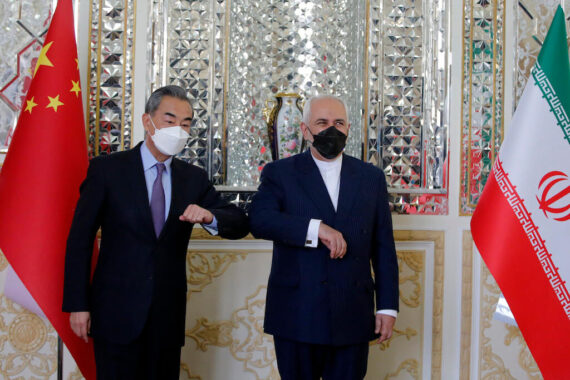 China and Iran have been building an increasingly close economic, political and security partnership since the mid-1990s, when China emerged as Iran’s partner of choice for its energy projects in both the nuclear field and hydrocarbons. Iran needed a credible partner to bring on-line its long-dormant Bushehr nuclear power plant which had been in the making since the mid-1970s.

Iran also badly needed investment in its oil and natural gas fields, which had remained underdeveloped since the revolution. With sanctions continuing to bare down on Iran, its choice of partners was limited by the number of countries which would be prepared to overlook American pressure and proceed to invest in Iran and work with its leaders.

As we know, under severe American pressure, China withdrew its offer of completing Iran’s Bushehr nuclear power project in the 1990s and ceded that opportunity to Russia. But in other fields, China made efforts to develop military and economic ties with the Islamic Republic. These ties endured and once the nuclear deal (the JCPoA) came into force in January 2016, the barriers to open ad trade and investment were lifted.

The visit of Chinese president Xi Jinping at that time underlined the growing interest that China now had in broadening and widening its interactions with Iran, and of course with the other major regional states that he visited during that same trip.

VIDEO: What is behind China and Iran’s ‘strategic’ deal?

Ties with Iran have become even more significant from China’s perspective, largely due to the roll out of its Belt and Road Initiative (BRI). This multi-billion-dollar series of infrastructural project straddling Eurasia and facilitating connectivity between China and inner Asia, West Asia and continental Europe, is directly dependent on the compliance and partnership of geopolitically linchpin countries such as Iran whose territories and infrastructure will create the pathways between China and Europe.

The BRI also benefits Chinese companies and businesses in providing the opportunities for these businesses to explore and capture new markets and to recycle much of China’s oversupply of materials such as cables, steel and steel products, cement and concrete and all manner of other manufactures and semi-manufactured goods. Asia’s markets and Africa’s markets have been ripe for China’s expansion and the BRI is arguably the most systematic and comprehensive tool for the creation of long-term and long-lasting connectivity between China and its wider hinterland.

Iran is a significant feature of this Chinese strategy, but is also a beneficiary of China’s interest in the Middle East. In the first instance, China’s growing thirst for hydrocarbons has resulted in convergence of interests between Iran and other Persian Gulf hydrocarbons exporters and China. With the bulk of their oil and gas, and oil products, heading East, and largely towards China, new trade and investment synergies have become more evident since the 2010s.

The BRI provides an additional layers to Iran’s urgent need to break through the sanctions, reduce its economic ties with the West, and at the same build on the growing and fast-maturing Chinese economy.

In the case of Iran, the critical energy relationship has been a lifeline against the intrusive and overwhelming American sanctions. For the Iranian authorities, China’s role has been fundamental, essentially checking the downward spiral of an already dysfunctional and weak economy.

The BRI provides an additional layers to Iran’s urgent need to break through the sanctions, reduce its economic ties with the West, and at the same build on the growing and fast-maturing Chinese economy. The ‘look East’ strategy first articulated by the Ahmadinejad administration (2005-2013) has come to form the backbone of Iran’s diplomatic strategy too, encouraging Tehran to turn Eastwards and ‘Northwards’ (Russia) since the Trump administration in order to break free of the straightjackets that the Western alliance had endeavored to keep Iran wrapped in.

And on March 28 2021, Iran finally formalized its Eastern orientation by inking the long-awaited 25-year strategic cooperation pact. Adding up to $400 billion worth of Chinese investments, this pact is set to change Iran’s political economy, and orientation of its economy away from its traditional partners in Europe, as well as possibly its place in the international order. Will Iran rise in the Jetstream generated by the Chinese economy, or will it become a vassal literally fueling and facilitating China’s growing domination of Asia?

Not surprisingly the pact has generated much commentary within Iran beyond its borders about the consequences of this for Iran’s independence, its national economy, and the revolutionary order’s fiercely defended autonomy and sovereignty. While some have interpreted the pact as a capitulation of historic proportions, akin to the disgraced the Treaty  of Turkmenchay signed with Russia centuries ago which cost Persia much of its territories in the north, others see in the pact with the world’s next superpower a strategic opportunity to hitch Iran’s wagon to the most powerful country of the next generation on the planet.

The elite see this pact as a masterstroke, which formally ties China to Iran’s prosperity and well-being.

The elite see this pact as a masterstroke, which formally ties China to Iran’s prosperity and well-being. Some in Iran see the pact in purely strategic terms, and a new line of defense against the ever-encroaching United States. The other parties with which China has cultivated closer economic ties – Saudi Arabia, the UAE, Israel, Egypt, and Turkey – have less of a sanguine perspective. For Tehran’s regional rivals in particular this pact raises questions in their minds about the wisdom of drawing closer to China when it now so openly ties its regional strategy to Iran.

Read: Iran’s Accession to the Eurasian Union Will Benefit Russia and Kazakhstan

And it was partly for this reason that Chinese foreign minister, Wang Yi, toured five other countries in the region during the same trip to assure them of China’s even-handedness and support for close cooperation with all regional countries. But doubts must persist when regional capitals reflect on the basis of the IRI-PRC pact in which long-term supply of discounted Iranian oil to China is to be the plank on which Chinese investments in infrastructure projects (roads, railways, telecommunications, ports, high-tech sectors of the economy, and of course in hydrocarbons) will be built.

It will be harder for the other Middle East oil exporters to easily match the (undisclosed) discounted price for oil that Iran will be providing China. Within the pact also are provisions for closer military and security cooperation, which will not only worry independent-minded Iranians but also the Islamic Republic’s rivals. A strengthening Iranian military working more closely with Asia’s largest and increasingly strongest military force and being able to draw on a wider range of Chinese weaponry is stuff of nightmares.

To provide a measure of perspective for the named ‘Iran-China Comprehensive Cooperation Program’, it may instructive to view it alongside the China-Pakistan Economic Corridor (CPEC). This project too was years in the making and was built on the long-established political and military ties between Beijing and Islamabad which were forged to counter the dominance of India. This massive collection of infrastructural projects amounting to over $60 billion of Chinese loans and investments in Pakistan since 2013 grew out of China’s development of the deep-water Pakistani port of Gwadar adjacent to Indian territory in the 2003-7 period.

The success of that project laid the foundations for the much more strategically-significant CPEC which has helped build roads, railways, electricity networks, internet facilities and mobile telephony infrastructure, urban centers, power generation plants (including solar and wind farms), and of course vital seaports which have transformed connectivity in this poor and mountainous country. Pakistan today is tightly knitted in China’s BRI and the economic corridor now provides China overland access to the Indian Ocean, firmly placing Pakistan in China’s orbit of influence.

Pakistan has largely benefited from China’s rivalry with India, so it is possible that Iran too could reap benefits from the Chinese-American rivalry, but before one reach to any conclusions it would be advisable to consider the wider geopolitical context. CPEC arguably had minimal impact on any other country bar India, whereas the Iran-China pact, worth over five times CPEC, will have ramifications for all of China’s regional and international relations and it is likely to be this dimension which will drive the partnership more than any other bilateral issues.