The RCEP is ostensibly a mechanism to oversee the trade activities of the major countries in the region. The hypothesis that China will draw the other countries into its orbit has yet to be proven. 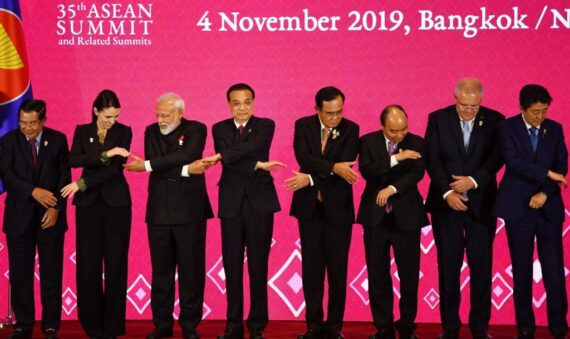 Prime Ministers of Cambodia, New Zealand, India, China, Thailand, Vietnam, Australia, and Japan prepare to pose for a group photo during the 3rd Regional Comprehensive Economic Partnership (RCEP) Summit in Bangkok on November 4, 2019, on the sidelines of the 35th ASEAN Summit. Photo by Manan Vatsyayana, AFP via Getty Images

The Regional Comprehensive Economic Partnership (RCEP) is the fruit of competitive international trade affairs in the Asia-Pacific that has been dominating world trade and investment environments in the past few decades. The treaty authorizes the member countries’ rational choice to stand between protectionism and free trade.

A treaty pact was signed on November 15, 2020 with virtual participation of the leaders of 15 member countries who represent almost 2.2 billion people and 30% of the world’s GDP. The anticipated greater plan and its practical gain will pump $200 billion into the global economy.

With the RCEP representing a bit less than one-third of the global economic output, this agreement is expected to have a great impact on the global economy. As observed in the last four years, more than half of the Association of Southeast Asian Nations (ASEAN) and China have constantly shown annual growth of more than 6-7%.

In recent years, the ASEAN countries have not only displayed a galvanizing productivity in logistics supplies and international trade, but have also gradually improved and showed an engagement with the dominant capitalist economic principals in the form of freer commercial activities.

This development, triggered by determinant geo-political narratives in the Asia-Pacific region, effectuates creation of certain trust among members of nations and the global investors.

The spirit of the ASEAN

The terms of the agreement provide a functional vehicle to eliminate the internal differences of member countries so as to reinvigorate production and trade affairs, while obtaining gains from this regional development.

There are three major aspects which can be considered as crucial developments. The first is the ASEAN-centered expansion of trade and investment activities.

The second is related to the East Asian nations, such as China, Japan, and South Korea, that have agreed, for the first time, to comply with mutual trade rules. Without a doubt, this will have a greater influence on the region’s peace and stability. In particular, the East and South China Seas will reclaim the status of mutual waterways for all the nations adjacent to them.

The third aspect is that this trade pact might become a model for other emerging powers and global players to adapt free trade agreements in a post-COVID-19 world.

The ASEAN and the member countries of the RCEP are optimistic and expect to lead opportunities in the coming years by driving the region’s youth dynamic interests.

The repositioning of China in global trade affairs

China is established as the RCEP’s panjandrum. But the nature of the treaty is based on a multilateralism in which China will not act as a single superpower and which eliminates the possibility that China will rule out the important of the other partner countries.

On the one side, we have the ASEAN, as a regional bloc, and on the other, we have Japan and Australia as stronger partners. This symmetry/balance, in turn, guarantees a resilience to the possibly of a thuggish China imposing its rules on the pact. Instead, this agreement means that trade activities will prioritize newly structured rules and regulations.

The ASEAN and the member countries of the RCEP are optimistic and expect to lead opportunities in the coming years by driving the region’s youth dynamic interests.

The RCEP is ostensibly a mechanism to oversee the trade activities of the major countries in the region. The hypothesis that China will draw the other countries into its orbit has yet to be proven.

Member countries such as Japan, Singapore, South Korea, and Australia collaborate well, and adopt well-structured and rational institutional approaches in bilateral and regional trade activities that are determined by rule-based establishments. The Chinese administration seems unlikely to be misguided by its economic power and run against such a strong block for short-term gains.

The US: Inside or outside the game?

The RCEP resonates with signs of effort toward the gradual reconstruction of economic growth in the Asia-Pacific. It poses novel problems for the new U.S. administration that add to the distress of a presumed isolation. Thus, U.S. President-elect Biden may desperately search for alternatives for repositioning his country on the global stage, and, in particular, in the Asia-Pacific.

However, the grave challenge the Biden administration will face is how to convince the U.S. Senate to rebound the country’s leadership in the Asia-Pacific region. Rather, the U.S. may opt to revive the relationship with regional powers and the ASEAN.

Biden will have no other choice but to reinitiate the active presence of the U.S. in the Asia-Pacific since the U.S. is already in a declining standing on the eco-political scene.

Since the United States lost an opportunity by rejecting the Trans-Pacific Partnership Agreement (TPPA) four years ago, the new administration will potentially be excluded from the RCEP, and President-elect Biden will experience a great dilemma.

When one closely revisits the first term of the Obama administration, it becomes apparent that the Eastern and Southeastern Asian countries, which serve as major drivers of global growth, intended to restructure regional trade affairs.

Liberalization is currently being experienced by the emerging regional powers. A larger regional trade agreement such as the TPPA or, as clearly proven today, the RCEP was expected since the beginning of this century, because of the changing nature of global business and trade.

When soft enforcement was used by certain regional powers such as Japan and Singapore to convince the Obama administration to sign the TPPA, it took half a decade to reach a consensus, which finally arrived in 2015. Therefore, it is not astonishing that an almost similar process began in 2012 for the regional countries in the Asia-Pacific to reach a similar pact.

Biden will have no other choice but to reinitiate the active presence of the U.S. in the Asia-Pacific since the U.S. is already in a declining standing on the eco-political scene.

Thus, the new U.S. administration is likely to take a step to create a peaceful environment on the global stage in order to gain the support of its allies, some of whom feel abandoned and others politically distanced. A better-case scenario would see the U.S. invest creatively in soft power rather than refocus on the competition with China as it has done in the previous years.

India preferred not to sign the RCEP in order to protect its domestic market from the “invasion” of Chinese goods.

Although growth figures show that the country has progressed in the last half decade, the Narendra Modi government preferred to lean on restricted trade borders. But the major argument is that India is yet to conceive its regional power role.

Since U.S. President-elect Joe Biden and the Indian government dubbed the RCEP a new emerging power, there is an alternative for a new geopolitical structure in the Indo-Pacific.

Biden and Vice-President-elect Kamala Harris have professed a desire to engage with India. There are strong signs that Harris has been perceived positively by Indians. Harris’s ancestral link may be instrumentalized for the U.S. in the use of soft power towards India in order to help the country regain its lost presence in the Asia Pacific region.

The RCEP is the end product of the long negotiation processes among the member countries that have dominated global trade and economic activities in recent decades. If this treaty is successfully applied, there is little doubt that it will mold trade affairs on a global scale.