Coffee Extinction Is Nature’s Way of Telling Us: “Heal the World!”

The coffee farmer, who provided the beans for my coffee, meanwhile fights a battle for survival - her crop was ravaged by an unexpected storm. 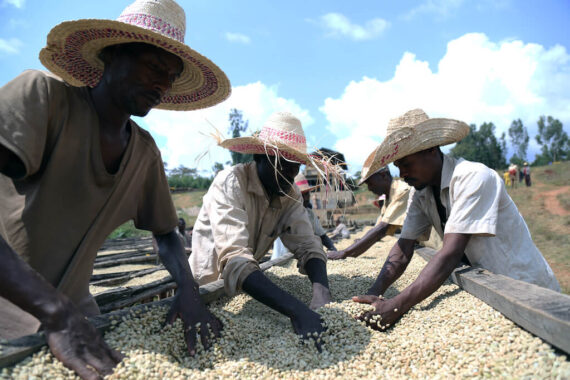 We have not known coffee for very long. Most accounts take us only as back as the 15th century, when it was first used by the mystics of Yemen. Yet, coffee somehow got the lion’s share of blame in many conspiracies around the world. Attempts were made with varying level of success by those who valued order over thrill to get it banned in the Ottoman Empire, Persia, Sweden, and Italy.

Now, the sublime beans seem to have had more than their due share of trouble, and are calling it a day.

Scientists have warned that 60% of the species of coffee are at risk of extinction. Out of 124 known types of coffee species, we actually use just two for our beverage: Coffea Arabica and Coffea robusta. But Arabica, the most popular one, is in trouble too.

Most of the species facing the risk of extinction are not used for making coffee. But even those must be conserved, scientists say, for cross-breeding and production of more resilient new varieties, which are sensitive to climatic threats.

According to experts, while global coffee demand is expected to double by 2050, at least half of the land used for coffee production may become unsuitable by then.

While coffee will not disappear anytime soon, the quantum of the problem is significant. Ethiopia, the original source of the enigmatic beans, is still the largest African exporter of coffee. But 60% of the land that is used for coffee production there will become unsuitable by the end of this century.

A very nice-tasting species of coffee, the Coffea stenophylla, was seen in December 2018 for the first time since 1954. This was only a single plant, in an area that itself, scientists reported, was threatened by human encroachment and deforestation.

According to experts, while global coffee demand is expected to double by 2050, at least half of the land used for coffee production may become unsuitable by then.

Even though a higher demand may support price in the short to medium run, we will actually be pushing the planetary boundaries in the longer run beyond what the Earth can sustain.

In the absence of appropriate support mechanisms, a higher demand will lead to a greater environmental stress, that is worsened by a warmer planet. Challenges to coffee production may increase in scope, as well as intensity, over time. The need to strengthen and augment the coffee ecosystem is urgent.

Human-induced climate change, diseases and pests, and deforestation are some of the reasons why certain species of coffee are already under threat.

Take Costa Rica, for example, where farmers are leaving coffee plantation in favor of orange production due to erratic weather, and more storms and droughts. This has meant an increase in the cost of the production of coffee. On the other hand, farmers find oranges to be more resilient in the face of climatic threats. This must be a difficult decision in a country where people feel a deep connection between Coffea and who they are.

VIDEO: Your Coffee Is Getting More Expensive. Here’s Why

But the damage from climate change does not stop here. As a result of the hotter climate and increasing rainfall levels, fungi such as the coffee leaf rust (Hemileia vastatrix) and pests like the coffee berry borer (Hypothenemus hampei) are appearing in areas that were previously free of them.

Meanwhile, growers in other areas, like Australia, which represents a potential substitute area to the more conventional centers of coffee production, lament less-than-usual rainfall, due to changing weather patterns.

Even if rainfall were optimal, Australian coffee is less environmentally stressed otherwise, and therefore, has 10-15% lesser caffeine. Caffeine production being a defense mechanism, a less stressful environment means less caffeine.

It, therefore, seems like there is also an optimal level of stress at which nature thrives. However, instead of respecting such subtleties and the intricate forces of balance in our world, we revel in the excesses that we cheer as the era of mass consumption.

As we see these problems from a distance, we may be tempted to conclude that there is still enough time to act and that appropriate measures will probably prevent something as extreme as coffee disappearing from the planet.

Yet, for those whose livelihoods depend on coffee, the question is rather irrelevant. For them, the coffee either stays feasible, or has to be replaced by some other crop as soon as possible. The falling prices of coffee worldwide have made things even more difficult, especially for smaller farmers.

Already 40% of coffee farmers are estimated to be living below the poverty line. Small farmers owning less than 5 hectares (12 acres) of land account for two-thirds of global coffee supply. They are not only poor to begin with but cannot compete with big producers in mechanization, automation, or cost-effectiveness.

Compare the small producers, with the big producers of Brazil, for example, which accounts for a third of global coffee production. Owing to greater sophistication, big Brazilian producers can produce more at a lower cost.

This is bad news for smaller farmers. When the overall production in the world is high – sometimes driven solely by Brazil – the price falls. This, again, effects small farmers disproportionately, who are producing at very low profit margins already. When the prices are too low, it is not unusual for them to have to sell below cost.

At the end of the day, poorer farmers may end up producing lower quality beans, at a higher relative cost, and not being able to incorporate more sustainable agricultural practices, like soil enrichment.

The result is that these farmers are trying to switch to other crops where they can. But switching to other crops is not a costless process, and may not always be a success. The disturbances from climate change and an erratic pricing system, have resulted in psychological health problems in poor farmers ranging from anxiety and depression to suicide.

The indifference of the world to the raging inequalities is heartbreaking. As we grab a $5 cup of coffee, on the go, we should think about the farmer who must have worked for 48 hours to make the same amount of money.

At the very least the world needs a mechanism to ensure a fair price to the coffee farmers, as their already challenged livelihoods are disrupted by the environmental footprint of the richer world. The richest 10% in the world account for more than 50% of global carbon emissions, after all.

So, where are we right now?

The Fair Trade movement is said to be helping farmers with a “fair” price. But even they admit that a price higher than what they are able to offer would be more desirable. Starbucks claims to procure 99% of its coffee “ethically,” where they have data going down to the name of the farmer who they bought the beans from along with the price (which they do not disclose publicly).

Others call for the key role of greater transparency in paying farmers, with some companies even mentioning the price they paid the farmer for the coffee clearly on the package. While these measures are worthy of recognition, they are more like first aid to a broken system that perhaps needs a much more drastic solution.

As for the search for more resilient strains, big investments are needed from governments and coffee companies. Many such trials for “future-friendly” coffees are already underway.

Yet arguably, the coffee’s endangerment is part of a bigger problem. The world leaders need to take responsibility for global environmental problems and devise an enforceable and credible mechanism to punish deviances.

Human-induced global warming is perhaps the central threat endangering coffee’s diversity. Extinction, in this perspective, is nature’s way of telling us, that all is not well. Manic consumption, obsession with profits, the disregard for the environment, and the inequalities plaguing our world actually have a cost. If it continues, nature is telling us, it will not continue.

As I sip my coffee and write from the comfort of my cozy room, climate change seems somewhat distant. The coffee farmer, who provided the beans for my coffee, meanwhile fights a battle for survival – her crop was ravaged by an unexpected storm.