One thing is for sure: the Colombian people have changed. In a country, where everything bad happened and at the same time nothing happened, the fact that its people have lost their sense of fear. 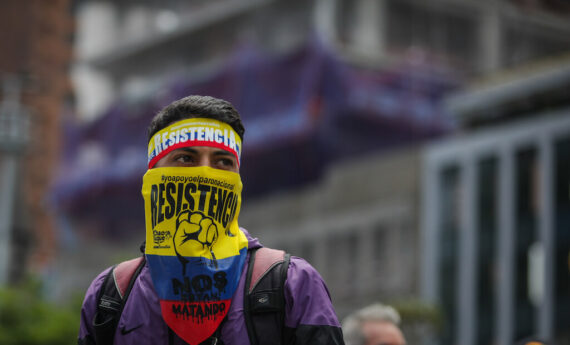 People take part in a demonstration on the fourteenth day of ongoing protests for the national strike against the tax reform of the Government of Ivan Duque, in Bogota, Colombia, on May 12, 2021. Photo by Juancho Torres, Anadolu Images

Colombian people took to the streets on April 28.  For Colombia, a country with a population of slightly more than 50 million, what happened that day was fairly rare: people got fed up with the establishment. A few weeks earlier, the Finance Minister Alberto Carrasquilla had announced the imperious need for a tax reform in which, among other measures, basic goods like salt, coffee, and chocolate would be taxed at a 19% rate. The country has been struggling under the COVID-19 pandemic, which has taken the lives of 88,700 Colombians so far, with lockdowns aggravating an already deteriorating economic situation.

According to DANE, the national statistics department, 22 million Colombians survive on less than $90 a month including 7.4 million who survive on less than $39. In 2020, 42.5% of the Colombian population were considered poor, a 6.8% surge from 2019. Colombia is a country where a member of congress earns 40 times the minimum wage, with an official unemployment rate of 15%, and an informal economy accounting for 50% of the country’s economic activity.

So, when the head of the economic team of Iván Duque’s government announced that even coffee, the symbol of Colombia’s economy, was a target for taxation, the common citizen decided they had had enough. In the past, most of the protestors had been organized by unions such as FECODE, the teachers’ union, or by CUT (Central Union of Workers), by calling on thousands to take to the streets, but the outcome was not even close to the level of protests this time.

However, this was not the only reason for the Colombian people’s reaction. Duque’s leadership regarding the enforcement of the peace treaty that his predecessor Juan Manuel Santos had signed with FARC, the country’s main guerrilla group, in September 2016, has been deficient: more than 900 social activists and 276 former combatants have been murdered since the treaty was signed.

Native communities, which make up around 4.5% of the Colombian population, have denounced that their ancestral territories have been affected by this lack of diligence.

Native communities, which make up around 4.5% of the Colombian population, have denounced that their ancestral territories have been affected by this lack of diligence. The drug trafficking business keeps violently disturbing these indigenous communities with no robust reaction from the national authorities. As a result, they too took to the streets massively.

In general, the people of Colombia demand the government adopt reforms in the police institution that include the dismantling of the special anti-riot force, accused of numerous abuses against Colombians; reform the health system which is basically privatized in Colombia; better economic conditions for both employees and entrepreneurs; more effective taxation for the extremely rich and an aid relief for those earning less; a guaranteed basic income for the poorer since the pandemic has been catastrophic especially for the most vulnerable; and also more resources for public education.

One of the main effluents during the strikes has been the students. Colombian youngsters face a future where the lack of job opportunities contrasts with the huge difficulties to access high-quality education. Relying on the official numbers of the Colombian Ministry of Education, only 52% of Colombian students acquire a technical or professional education after high school. Most of them seek refuge in jobs in call centers, delivery services, or other low paid jobs characterized by lack of social protection and social security.

It is the students, in fact, who feature heavily in the deadly toll of the violent repression that the Colombian police has practiced against its civilians. According to the Colombian human rights NGO TEMBLORES ONG, a month after the general strike started, there have been at least 43 homicides and 1,133 injuries due to the intervention of the police force, and 1,445 people have been reported arrested.

Not only this, 22 sexual assaults were reported and 47 eye injuries, with many losing an eye as a result of the actions of the regime’s security forces. In many cases, human rights lawyers have denounced arbitrary arrests where basic rights have been denied to those arrested. The number of missing people is in the hundreds. In other words, a national tragedy has occurred in just over a month in Colombia.

Armed civilians in Cali have been filmed shooting with automatic firearms at people marching in the streets.

Amidst this chaos, the one thing that has shined above everything is the absence of real leadership by the head of the state Iván Duque. A week ago, an international commission of human rights flying in from Argentina was prevented from entering the country and sent back from Bogota’s airport. The Colombia president has been asked by the public to meet with the protesters, but he has refused to do so.

Santiago de Cali or simply Cali, the country’s third most populous city, is a 30-minute flight from the capital. It is considered the epicenter of the strike and even though its population is around 5% of the country’s total, it accounts for 60% of the casualties. Armed civilians in Cali have been filmed shooting with automatic firearms at people marching in the streets.

All of this is happening in front of the police personnel with the evident complicity of the official forces. The police has focused exclusively on repressing the protests while these armed civilians remind Colombians of the nightmare of paramilitary squads, which sadly are far from being the ghosts the times past. Duque went to Cali twice. On both occasions, he met with the police forces and the civilians living in rich neighborhoods, where the armed citizens shooting at the protestors had been spotted.

The government’s attitude has been limited to basically accusing the popular movement of being subversive and terrorist, and blaming the former left-wing presidential candidate Gustavo Petro of inflaming the situation. The Colombian society is polarized between those supporting the right-wing ruler and those opposing him. Meanwhile, most Colombians think the country’s real boss is Álvaro Uribe, the former two-time president who is accused of standing behind thousands of extrajudicial killings during his 8-year term in office.

Now more than two weeks into the protests, the government decided to call off the proposed tax reforms from Congress. Finance Minister Carrasquilla, a stubborn squire of the regime, resigned. A few days later, a health reform which was on the path to becoming a law and which according to critics would transform the Colombian system into a copy of that of the U.S. in terms of privatization, was also dismissed. Three important achievements for the people indeed.

But the masses are still in the streets. The anger has become more intense, the division in the society has increased, and even the class struggle has been exacerbated. With violence from the police and the civilians escalating, it’s totally unpredictable how things will develop and even more uncertain how they will end. Local and national authorities have proven absolutely incompetent in dealing with the current turmoil – in the same way they have failed to handle the COVID-19 pandemic.

On the international front, the Biden administration seems to be cautiously watching the developments in what they consider one of their most loyal allies in the region. Calls for respect for human rights come from many governments and NGOs, but nothing more.

One thing is for sure: the Colombian people have changed. In a country, where everything bad happened and at the same time nothing happened, the fact that its people have lost their sense of fear and realized that they do not have much more to lose is essentially a huge move for Colombian civil society. Time will show if this will lead to fundamental changes, which as anyone who knows Colombia may affirm are urgently needed.