Iraq Assassinations Prove There Is No Room for Anti-Iran Dissent

There is now a new kind of Iraqi nationalism forming that is largely based on opposition to corruption engendered by malignant Iranian interference. 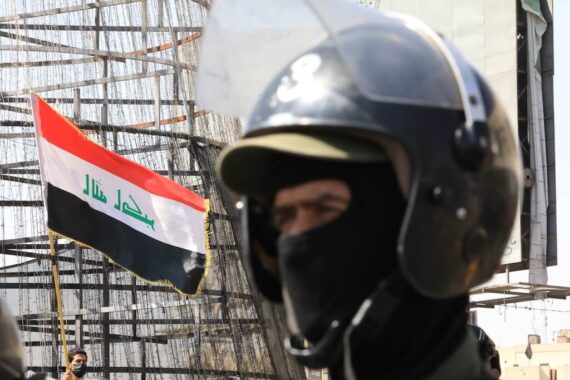 Iraqi security forces stand guard as a group of demonstrators gather to protest against assassinations of civil activists and public service shortage at Tahrir Square in Baghdad, Iraq on May 25, 2021. Photo by Murtadha Al-Sudani. Anadolu Agency.

Iraq has often been likened to a mafia state and a kleptocracy. It has the semblance of democracy through fairly regular elections, and the trappings of a judiciary and security forces serving the interests of the nation by “fighting terrorism” and “ensuring justice is served”, as Iraqi politicians often like to pontificate in an attempt to polish their credentials as public servants.

In reality, however, Iraq has become the playground for Iran-sponsored Shia jihadist groups and militias who control every kind of industry imaginable, from a Shia clergy-backed illicit sex trade that sells girls as young as 9-years-old, to a drug trafficking cartel that controls Iraq’s porous borders with Iran and smuggles copious amounts of narcotics.

Regular Iraqis who have had their lives upended by the incessant criminality and who have had their hopes for a bright future dashed by these gangs and terrorist organizations know that Iran’s insidious influence is responsible. Although they have come out in protest several times, such open dissent is often extremely deadly, with activists facing assassination and worse.

VIDEO: Who is behind the murder of social media stars in Iraq?

A recent spate of political assassinations

This month alone, several well-known activists and political dissidents have been killed, with the state either complicit in the slayings or else powerless to prevent these powerful militias from murdering the Iraqi citizens it is supposed to protect.

In the first week of May, Ihab al-Wazni, a leader of the protest movements in Karbala, was gunned down outside his home. Surveillance footage showed several masked men on motorcycles close in on Wazni before strafing him in a hail of gunfire, killing him on the scene.

The militants had finally killed the prolific activist, himself a Shia Arab, after attempting to do so in December 2019 just after the most recent protest movement first began in earnest. Wazni narrowly escaped an attempt on his life which tragically led to the death of his friend and co-organiser Fahem al-Tai. Wazni was dropping Tai off at his home, also in Karbala, when again masked gunmen opened fire leading to Wazni barely escaping death while Tai was not so fortunate and was killed outside his home.

The assassination of Wazni was followed 24 hours later with the attempted murder of journalist Ahmad Hassan who was shot in the head as he arrived home in Diwaniyah. Hassan has undergone brain surgery and remains in critical condition at a Baghdad hospital with his family fearing further retaliation against him and them due to his criticism of the authorities and militia violence against unarmed demonstrators.

Read: Suicide Bombings in Iraq: A Return to Security Chaos?

Over the weekend, a candidate in the upcoming elections was also assassinated, again by suspected Iran-backed militants. Hashem al-Mashhadani, a Sunni candidate in Baghdad for the Azm Coalition led by businessman Khamis al-Khanjar, was killed last Saturday less than five months before elections are due to take place. Khanjar described the assassination as “a dangerous message” designed to undermine the democratic process by putting candidates in fear of their lives.

These assassinations and murders have led Al-Beit Al-Watani, or the National House bloc, a political group which emerged out of the protest movement, to boycott the elections set to take place in October this year. The party has demanded that the killers responsible be brought to justice before the electoral process can be taken seriously. Obviously, this is not a controversial position for them to adopt, particularly considering the last election in 2018 attracted an embarrassing 44.5 percent turnout, placing enormous doubts on the credibility of Iraq’s democratic process.

It is no secret that Karbala, Diwaniyah, Baghdad, and all major Iraqi cities are crawling with pro-Iran Shia militants. While the protest movements in Iraq were primarily Sunni-led until the rise of the Daesh terror group in 2014 (itself a consequence of sectarian Shia Prime Minister Nouri al-Maliki’s violent suppression of protests), since Daesh’s defeat and the recapture of Mosul in 2017, most demonstrations have been led by the Shia.

The authorities in Baghdad blamed all of Iraq’s economic, security, and political woes on Sunni terrorist organizations, including Al-Qaeda, but after they declared victory in 2017, the common Iraqi Shia began to lose patience with the government for its total lack of services, corruption, and its subservience to Tehran’s interests and diktats. This ultimately led to a number of crises, including the total poisoning of Basra’s water supply due to systemic negligence, continued electricity shortages despite Iraq’s massive energy wealth, and rampant corruption that has drained Iraq of at least $150 billion since 2003, destroyed the economy, and the people’s hopes for a brighter future.

Realizing that the problems faced by the country could not solely be attributed to terrorist organisations, and having finally felt fed up of the government blaming everyone but the corrupt politicians who serve the national interests of Iran rather than Iraq, the Shia Arabs took to the streets in heretofore unheard of mass demonstrations in the Shia-dominant south.

These protesters knew who to blame. Aside from torching the offices of several Shia Islamist parties, the demonstrators have repeatedly set fire to diplomatic buildings including consulates belonging to the Islamic Republic of Iran. Anti-Iran sentiment is at the highest it has been likely since the Iran-Iraq War of the 1980s, a war in which many Shia Iraqis gave their lives to prevent Iraq from being occupied by Iranian forces after Ayatollah Khomeini, the founder of the Islamic Republic, ordered an invasion of their country in 1982.

What this demonstrates is that there is now a new kind of Iraqi nationalism forming, and it is a nationalism that is largely based on opposition to corruption engendered by malignant Iranian interference. By trampling over human rights, the rule of law, and the rights of Iraqi citizens to live with dignity and economic opportunity, Iran and its Shia proxies have inadvertently created perhaps their worst enemy yet. Rather than that enemy being a terrorist organization, it is instead the Iraqi people themselves and, as such, it is only a matter of time before they topple the corrupt state that has made their lives a living misery since 2003.