Indian diaspora is one of the largest in the world. With COVID19 cases on the rise back home, Diaspora Indians are worried more than ever. 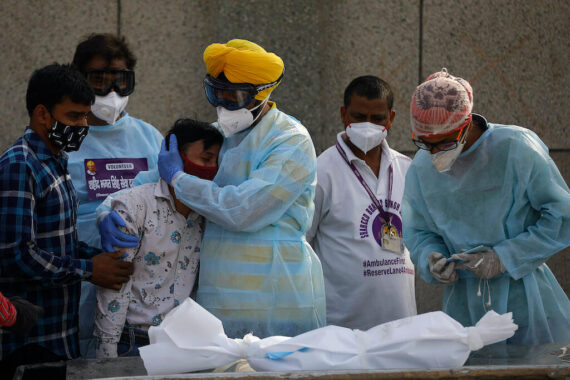 A man mourns as he and volunteers prepare for the last rites of a child (Pari 5 Month old) who died due to the coronavirus (COVID-19) pandemic for the last rites at a cremation in New Delhi, on May 12, 2021. Photo by Amarjeet Kumar Singh, Anadolu Images

The corona virus pandemic has affected and devastated the world. Every country in the globe has been affected by the virus which does not distinguish between developing or developed countries, rich or poor.

COVID19 has changed the lives of millions, disrupted, and even uprooted the lives of many others. There are not many people in this world who have not experienced the devastation of COVID19. Countries that fared well during the first wave have failed in their responses to their second waves such as India.

As the pandemic raged in its first wave, India’s strict lockdown policy between March 25 to May 31, 2020, proved to have worked to limit the number of cases and even bringing the average down to 20% of its peak compared to the population of India of 1.3 billion people. India was an exporter of vaccines, shipping 66 million doses since January, while its own cases rose.

However, India is devastated with its second wave of COVID19 infections leading up to 23 million infections with 250,000 dead in mid-May alone according to The New York Times, while the actual figures are much higher and go unreported.

Hospitals are overwhelmed and depleted of oxygen tanks which have become as valuable as gold as people are dying on the streets. Funerals have been held en masses where resources for the funeral pyres have also become hard to find and afford.

For Indians living in the diaspora, the anguish of helplessness for their family members grows day by day.

For Indians living in the diaspora, the anguish of helplessness for their family members grows day by day. The constant anxiety that our loved ones are at severe risk has made many scrambling to secure oxygen tanks for family members and send funds that can give them a chance at life, so they do not end up like thousands who had been rejected and turned back by multiple hospitals.

My mother for one, calls upon her family a few times a day just to see if her cousin who lives with a pre-existing condition and nieces and nephews are safe. The most tragic confrontation with COVID19 my family has faced in India is my aunt’s contracting the virus, who became a widow a few months ago with the loss of my uncle. Her situation was so dire that the doctors at the hospital had no indication that she would make it out of the hospital alive.

If it was not for a family member living in the United States, who had direct connections to the hospital’s doctors and staff, they would not have treated her with attention. We have been blessed that her condition had turned around, that was not the case for so many as her sister, who accompanied her at the hospital, had to witness numerous people leaving the hospital in body bags.

Up until recently, another personal scare was when my close friend in Delhi sent a voice note that her entire family has been affected and her father is in the hospital in serious condition. Luckily for her and her family, her father made it while many did not. There have been countless stories I hear from friends who have lost loved ones already.

One of my friends who resides in London, England, has lost three members of his family in India. One was his cousin who left behind two little girls who will never know the love of their father again.

However, politics prevail over life in this case as the failure of the second wave falls completely on the rights-wing Hindu nationalist government of Prime Minister Narinder Modi. Instead of following COVID19 guidelines of wearing masks and social distancing in public places, he held mass political rallies and allowed religious zealots to hold mass festivals that became super spreaders.

It came to the point where Narinder Modi and other political leaders tried to prevent social media sites and other media sources from showing images of the apocalyptic scenes of people dying in the streets and the cremation sites.

Previously, the state of Punjab where our family is from was not as affected until outside residents started to come into the state for medical treatments at the hospitals. This has pushed COVID19 cases in the state of Punjab further. It is more upsetting to have learned that Narinder Modi and his government has denied the state of Punjab to facilitate an oxygen corridor to procure oxygen tanks and gases from Pakistan who is a traditional ‘enemy of India’ since its inception and partition of 1947.

This is despite Pakistan’s Prime Minister Imran Khan offering to help India in providing medical aid.

The chief minister of Punjab Amrinder Singh and many other politicians have repeatedly asked Narinder Modi’s government to procure the lifesaving equipment from the city of Lahore, Pakistan which is only 31 miles from Amritsar, Punjab, instead of waiting for oxygen, health equipment and other medical aid from the state of Jharkhand, 1,088 miles away. It is tragic that the right-wing Indian government cares more about maintaining their political egos than accepting much needed help from a neighboring country that they see as their ‘enemy’ while millions of people have been affected with COVID19 and thousands are proclaimed dead each day.

It is heartbreaking and tragic to witness the thousands of lives lost each day to COVID19 from afar. The thought that maybe someone we know, or a family member can easily become one of those statistics is a constant anxiety.

The fear that the next phone call from the motherland will bring intense news of sadness makes us all feel we should have done more in the past to be with them. Only if we can take a flight back home and console them that they are not alone, we stand with them shoulder to shoulder, from afar. 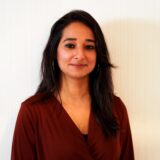 Taljinder Shergill is the Communications Director of Skyline International for Human Rights. She is a graduate of MA in International Relations and Political Science, University of Leeds. She is a Canadian national and currently residing in Madrid, Spain.