Indian government has a moral obligation to grant Kashmiri prisoners their long-deserved freedom. 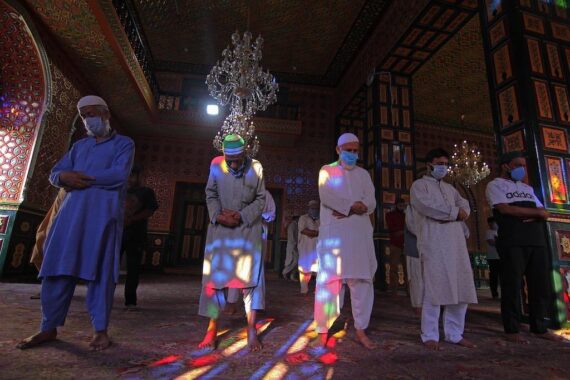 Kashmiri men wearing face masks pray while maintaining social distance inside a shrine in Srinagar, Kashmir, India on August 16, 2020. The government administration ordered re-opening of religious places across the Jammu and Kashmir after remaining closed nearly for five months due to the novel coronavirus (COVID-19) pandemic. Photo by Faisal Khan. Anadolu Agency.

The Indian government’s criminally negligent mishandling of the Coronavirus pandemic has made the country a dystopic COVID19 hell, as mass cremations and burials, along with scenes of COVID19 distressed patients choking to death in the streets washing over our social media timelines like a gigantic tidal wave.

Almost every layer of government has been completely overwhelmed. The health system is on the brink of collapse, but rather than tend to the crisis at hand, the Narendra Modi led regime is waging a war against its critics by ordering Twitter to silence its critics and carrying out property seizures against journalists who report the truth about the country’s rapid descent into the COVID19 abyss.

As new daily cases continue spiking upwards, surpassing 350,000 per day on Monday, the people of Indian Administered Kashmir fear for the worse, knowing they are not only subjected to the brutal rule of an Indian military occupation but also the incompetence and neglect of an Indian central government.

The Kashmiri people are especially concerned for the health and welfare of their loved ones who remain trapped in prisons and dungeons throughout the territory and India for no other crime than speaking out against Indian colonial rule and in favor of self-determination. They are Kashmir’s political prisoners.

“The Republic of India is facing a tsunami of COVID19 with tens of thousands of cases every day including thousands of deaths which has put lives of Kashmiri political prisoners at highest risk,” the Kashmiri advocacy group Legal Forum for Kashmir (LFOVK) urged in a letter to the WHO Director General Dr Tedros Adhanom Ghebreyesus.

LVOVK has also pleaded with International Committee Red Cross and other human rights organizations to take concrete steps to pressure India into releasing Kashmiri political prisoners from their jails, saying, “Any danger to their lives will be solely on the shoulders of Republic of India.”

When I spoke with the son of Dr. Ashiq Hussain Faktoo, and daughter of Shabir Ahmad Shah this week, they described to me the grave fears and concerns they have for the fate of their respective fathers as the COVID19 virus rips through India and Kashmir at record speed.

Dr. Faktoo, along with his wife, has been held in prison by Indian authorities for nearly all of the past 27 years.

Dr. Faktoo, along with his wife, has been held in prison by Indian authorities for nearly all of the past 27 years. He’s not only one of the disputed territory’s longest jailed political prisoners but also commonly described as “the Nelson Mandela of Kashmir,” having attained his PhD and published more than 20 books in prison.

His youngest son Ahmed Bin Qasim, who is now 22 years of age and has never seen his father “under the open sky,” says his father was arrested for refusing to “join mainstream Indian politics,” and be a puppet politician, one who would endorse “the politics of what India does in Kashmir; the masquerade of democracy India puts up in Kashmir. They wanted him to be a part of that.”

Read: India and Pakistan: Are the Two Rivals Becoming Friends?

Instead, Dr. Faktoo wrote books about the way in which the Indian government’s rule over Kashmir, including the judiciary and legislature, is set up to help the Indian state buy time in preventing international intervention in resolving the territorial dispute and validate the otherwise illegal detention of political prisoners and human rights violations carried out by Indian security forces.

“Both of my incarcerated parents are old and suffer from multiple chronic ailments,” says Ahmed. “Since the outbreak of COVID19 in India, we have had no communication with them. So while pandemic is difficult for everyone, but we can’t even inquire about or ascertain the well-being of our jailed family members.”

“My mother is 60 and she is jailed in Tihar Jail. Just a few days back, a massive outbreak of COVID19 was reported from the same jail. There are many Kashmiris in that crowded jail. The Indian state deems Kashmiris living outside prisons as killable and dispensable. One can only imagine their treatment of those inside prisons.”

Shahir Ahmed Shah, who was dubbed by Amnesty International as “the prisoner of conscience,” has languished in prison for more than 30 years for speaking out against Indian colonial rule in Kashmir.

When I spoke with his daughter Sehar Shah, she said she’s panic stricken by the deteriorating health of her father and the ever-worsening COVID19 pandemic.

“He has lost tremendous weight living in his 6-foot by 8-foot cell, and has visible dark circles around his eyes, and not able to stand fully because of weakness and aches in his back,” she told me. “He has been diagnosed with a severe heart ailment block in his arteries, and a few weeks ago doctors said he’s in immediate need of spine surgery and is struggling with diabetes and hypertension.”

In other words, Mr. Shah’s pre-existing conditions make him more vulnerable to a more severe infection from the virus, putting him at a high risk of death. There’s no justifiable or reasonable reason why he should have been detained as a young man 30 years ago in the first place and it’s a moral outrage that India has kept him in captivity today.

Both Mr. Shah and Dr. Faktoo, along with hundreds of other Kashmiri political prisoners, are detained and imprisoned without charge or trial under a draconian law titled ‘The Jammu and Kashmir Public Safety Act” (PSA), a mechanism that allows the Indian government to circumvent both the Constitution and criminal justice system, thus placing the activities and measures used by Indian security forces outside the realm and reach of the law.

“The text of the PSA itself violates international human rights law and standards, but even the limited safeguards provided within the law are routinely ignored, and the law misused, by executive detaining authorities and the J&K Police,” observes Amnesty International.

For Kashmir’s political prisoners, there are no criminal cases against them. They are held only because of their opposition to Indian military rule and colonization in the disputed territory of Jammu and Kashmir. Now that they’re faced with the threat of COVID19 infection and death because of the Indian government’s neglect and mismanagement, the same government has a further moral obligation to grant them their long-deserved freedom.

Also Read
Russia’s Changing Relationship with India: Arms Talk
We use cookies to optimize your online user experience. To learn about our use of cookies and how you can manage your cookie settings, please see our Privacy Policy. By continuing to use our site you are excepting our use of cookies.Accept Cookies & CloseMore Info