Cryptocurrencies in the Middle East: Investment Surrounded by Risk

For people in the Middle East, buying cryptocurrency is not only an opportunity to invest but it is used as a shield of their savings against the devaluation of local currencies and financial crises. 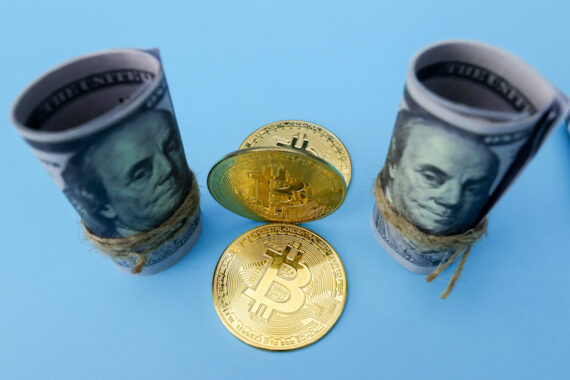 In this photo golden Bitcoin cryptocurrency and US dollars are seen in Antalya, Turkey on May 13, 2021. Photo by Mustafa Çiftçi. Anadolu Agency.

Cryptocurrencies are going mainstream. Since the creation of Bitcoin in 2008, the market capitalization of cryptocurrencies (cryptos) has reached $2 trillion. Bitcoin and other cryptos are also growing presence in the Middle East.

Cryptos are not just an alternative investment, but they may be used to relieve economic and financial turmoils.

The Middle East is not new to the use of decentralized payment systems. For years, people used the Hawala (Trust) system as an informal value transfer system to bypass traditional banks. But with cryptocurrencies, the trust based on the Hawala system has been replaced with algorithms, which are the fundamentals of the decentralized nature of the cryptocurrencies based on blockchain technology.

Cryptocurrencies have gained attention from users in the Middle East over the past few years. A growing presence of cryptocurrency-related service providers, exchanges, and trading platforms popped up rapidly in the region.

Although crypto is a highly volatile investment, the growth of Bitcoin (from $1 in 2011 to almost $43,000 in 2021) has shown the world its promising profits.

For people, buying cryptocurrency is not only an opportunity to invest but it is used as a shield of their savings against the devaluation of local currencies and financial crises.

For people, buying cryptocurrency is not only an opportunity to invest but it is used as a shield of their savings against the devaluation of local currencies and financial crises.

Scams and frauds are ordinary in the crypto world. The relative complexity and the lack of knowledge on cryptos may expose investments and savings to big risks.

However, such risks haven’t stopped Lebanese from investing in cryptos amid an unprecedented economic and financial crisis that hit Lebanon in late 2019. Lebanese Lira fell to 80% against the dollar. Banks severely limited access to accounts to millions of people, thus, many started to invest in cryptos to relieve from the devaluation of the local currency and secure their assets away from the Lebanese banks.

Crypto users in the Middle East conduct trades in many ways, depending on the regulations of their countries of residence. Many use several mobile apps. Some investors that have foreign bank accounts use well-established exchange platforms, including Coinbase. But some crypto exchanges don’t serve users in every Middle East country. So, buyers rely on local exchange platforms, such as OTC remittance outlets or private professionals that manage several portfolios by trading on WhatsApp, Telegram, Facebook, and Twitter.

Aside from Coinbase, Binance, and other popular platforms, users in the Middle East also use local exchange platforms.

Although new cryptos are getting popular, the most crypto traded in the Middle East is Bitcoin. As a second choice, buyers invest in Ether, the cryptocurrency based on the open-source blockchain developed by Vitalik Buterin in 2015. Recently, Dogecoin, a crypto formed as a joke, gained popularity due to the endorsement of Elon Musk, CEO of Tesla and other companies.

Due to the restrictions, lack of a regulatory framework, or unclarity over trading cryptos, not all countries in the Middle East may use the most popular exchange platforms. Aside from Coinbase, Binance, and other popular platforms, users in the Middle East also use local exchange platforms. For instance, BtcTurk is the biggest cryptocurrency exchange in Turkey, with around 3 million users, according to Bloomberg.

Rain, a cryptocurrency trading platform licensed by the Central Bank of Bahrain, serves crypto products and services in Bahrain, Saudi Arabia, United Arab Emirates, Kuwait, and Oman. Among other exchange platforms, BitOasis, Local bitcoins and Paxful are widely used in the Middle East. However, many people join Western platforms by using Virtual Private Network (VPN) tools. Charges and the security infrastructure are the key elements that lead to preferring an exchange platform rather than another one.

Miners use very sophisticated computers that solve complex calculations. Miners were paid 6.25 bitcoin for every block mined, but the reward was reduced by 50% in May 2020. One of the most expensive costs to mine cryptos is power energy. Elon Musk has recently highlighted the issue related to crypto mining related to the environment. Electricity cost is an essential factor for starting a mining activity.

Most mining farms work in China, where electricity price is widely cheaper than in Europe and the U.S. In the middle East, Iran is a very important player in the mining market. Its electricity price ($0.005 KWh in a household) makes Iran a suitable country for mining, along with China and Venezuela. There are some Chinese mining farms in Iran, according to several reports. Kuwait may be an interesting county for mining, but the lack of infrastructure prevents mining operations on a large scale.

Blockchain technology is not only limited to cryptocurrency. Like the rest of the world, Middle Eastern countries are developing Central Bank Digital Currencies (CBDCs). These are new financial instruments based on the blockchain that would allow central banks to issue digital currency. CBDCs are an effort to contain and fight back Bitcoin and other cryptos. CBDCs are the digital representation of countries’ fiat currencies (government-issued currency). They are important because they can be programmed and can reduce processing times and costs.

In the Middle East, the central banks from Saudi Arabia and UAE are working together on a blockchain technology project called Project Aber. The dual-issued CBDC would be viable for cross-border payments, as it would be an improvement over their current centralized payment systems. Israel, Lebanon, and Turkey have claimed to plan to launch their CBDCs too. However, these pilot projects are still embryonic as they need to develop adequate infrastructures to make them work. Although some experts say that CBDC will destroy the cryptocurrency market, others see this new financial instrument only as an alternative to use cash.

The race to cryptocurrencies and the new financial instruments are part of the development of the fintech industry in the Middle East. The region has strong potential, although it is one of the most underbanked regions in the world. Furthermore, cryptocurrencies have strict relations with energy resources, thus, not all Middle East countries will be able to develop financial instruments based on blockchain.

At the political level, Bitcoin and other cryptocurrencies may represent an obstacle to monitor the cash flow for some countries. For others, cryptocurrencies might help avoid international sanctions, although restrictive measures have been put in place in recent years.

Regarding CBDCs, it is too early to discuss whether they can help local or cross-border payment systems. So far, no central bank has issued a retail CBDC, and the current pilot projects are still at an early stage to get feedback about its adoption.

Also Read
The Rise of Bitcoin and its Ambiguous Future