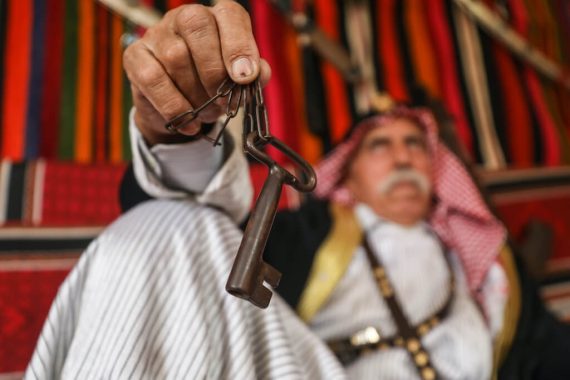 Palestinian Mahmud Ebu Diyb (81), who witnessed "Nakba" meaning "catastrophe" in Arabic, to refer to 1948 expulsions by Zionist gangs in historical Palestine, holds a key to his house in Bi'r Muin town, which he and his family were forced to leave, in Beni Suheyla al-Rifaiyye town of Gaza City, Gaza on May 12, 2020. Photo by Ali Jadallah. Anadolu Images.

The Palestinian mass displacement in 1948 known as the Catastrophe, or Nakba, which proceeded the creation of the state of Israel after Zionist forces depopulated 532 Palestinian villages and carried out dozens of massacres, continues to be denied by Israel today.

For the founders of Israel, these massacres and forcing between 750,000 to one million Palestinian refugees out was merely a process that happened when “the war broke out” between the Palestinians and forces from seven Arab countries, on one side, and Jewish militias, on the other. In this article, I present and debunk a number of myths about the Israeli narrative of the Nakba events and the creation of Israel.

Israel claims that seven Arab armies took part in the fighting against Jewish militias in Mandatory Palestine, which includes the entire land between the Jordan River and the Mediterranean Sea, after Britain decided to end its mandate on May 15, 1948.

Looking at the numbers, one can easily point out that the Arab forces, and Palestinian volunteers by extension, were poorly trained and equipped, and that their numbers were much lower than the Jewish militias taking part in the systemic depopulation of Palestinian towns and villages in 1948. Some 67,000 well-trained and equipped Jewish forces—many of them having served in World War II under British command—took part in the fighting against some 14,962 Arab forces from seven countries. Hundreds of other Palestinian fighters took part in the fighting, most of them were poorly equipped.

The Israeli narrative claims that Palestinians chose to leave their towns and villages. Israel negates what actually happened, and the mass depopulation of villages and cities in Palestine, including committing dozens of massacres against the Palestinians to push them out. One such example is the Palestinian village of Deir Yassin, where some 250 Palestinian civilians were massacred, including pregnant women and children.

The news and smell of death of Deir Yassin sent waves of shock and panic across Palestine pushing many Palestinians to run for their lives, lest they face a similar fate to Deir Yassin and dozens of other villages. Israeli leaders praise the role of the massacre of Deir Yassin in establishing Israel. Menachem Begin, in his 1952 memoir, says that “without Deir Yassin there wouldn’t have been an Israel.”

Some 150,000 Palestinians remained in villages and towns in what became Israel. Although they hold Israeli citizenship today, Israel still refuses to allow many of those who were internally displaced in 1948 to return to their hometowns and villages. Some of these locations are just a couple of miles away from where Palestinians live today.

Israel wants Palestinians to forget their ancestral homes completely, and Palestinians resist this masterplan by the annual return marches to villages and towns that were depopulated in 1948. The annual March of Return to the village of Miyar is an example. However, it is given no mention in English-speaking media and was faced by brutal Israeli police force this year.

Israel claims that the right of return is not possible because it will result in the displacement of millions of Israeli Jews who were brought in as settlers from all over the world, replacing the Palestinian population. According to research by Dr. Salman Abu Sitta, 90% of depopulated Palestinian towns and villages in 1948 are still empty, and Israeli settlements were built on surrounding areas and open spaces next to Palestinian towns which were depopulated and destroyed.

Israel claims that Israeli Jews from Arab countries, who left after the establishment of Israel,. have the right to return to their properties and receive compensation. Looking deeper into this issue, however, it is alleged that Mossad, the Israeli intelligence service, was behind planting bombs in countries such as Iraq and Egypt to create fear among the Jewish population pushing them to migrate to Palestine. As Palestinians with the Right of Return have a right to their properties, both collectively and individually, so do these Israeli Jews. Yet, their right to their properties and their claim should not be used to justify the displacement of Palestinians.

Israel claims that the Nakba was a causality of war and a necessary evil but looking at its policies today, this narrative loses credibility. The Nakba was well-calculated and planned in advance. Jewish militias collected information about the entrances and exits to every single Palestinian community, town, and village, and about population registries including ages and professions as well as ownership of land and water wells, which they later used when they carried out their plan of depopulating Palestinian towns. In fact, the Zionist movement spied on the communications of Palestinian leaders in the 1940s. In other words, carrying out the crime of the Nakba and displacement took years of preparation and planning.

Israel claims that the Nakba is an isolated incident that Palestinians can’t get over, and that they refuse to “engage in peace.” On the contrary, the Nakba is ongoing to this day with Palestinians in the Gaza Strip literally caged by Israeli walls and navy ships suffocating them, and Israeli forces counting the number of calories Palestinians can consume. The Nakba is ongoing with Israeli house demolitions on a daily basis in the West Bank. The most recent example is the decision of an Israeli court to displace and depopulate eight Palestinians communities in Masafer Yatta in the Southern Hebron Hills on May 5, 2022.

Israel’s denial of the Nakba is the root cause of the bloodshed we continue to witness today, its overwhelming majority on the Palestinian side. In 2020, Palestinians outnumbered Israeli Jews between the Jordan River and the Mediterranean Sea, and with this reality galvanized in the Israeli Nakba denial, Israel will increasingly find itself chained by this apartheid reality that will render it a prisoner of its own policies.

The way to heal is to listen and consider the narratives of Palestinian Nakba survivors, many of whom are still alive, and their decedents, and to make this narrative part of the solution. By listening to their experiences and taking these stories into account, the victims of war in Palestine can heal and justice can be realized through the return of Palestinian refugees.

Denial of the Nakba will only create a settler society that is not aware of its country’s recent history, a history that is deep and rooted. The history of a land cannot simply be overwritten by living behind walls and denying it ever happened, as most Israelis choose to do today.