This is the right time for the international society to take real responsibility in order to overcome the already deepening Syrian crisis. The violent fall of Idlib will not bring an end to the Syrian Civil War, but Idlib can provide a tremendous opportunity for Russia and the international community to find a common ground for the future of Syria. 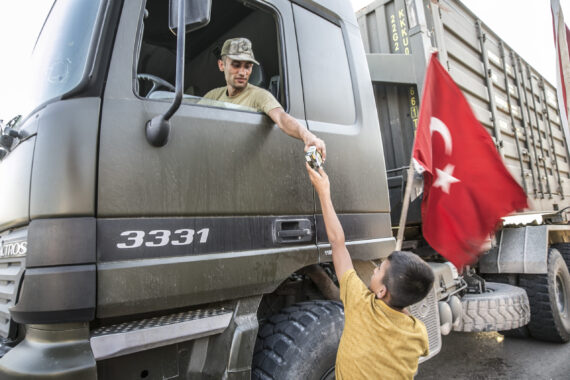 A kid receives a juice from a Turkish soldier as a kid greets Turkish military convoy while Military vehicles belonging to Turkish Armed Forces' are being dispatched to support the units at border in Reyhanli district of Hatay, Turkey on September 12, 2018. Anadolu Agency

The Tehran summit that was held last week did not produce any clear-cut solution to overcome the ongoing uncertainty in the Idlib region. The uncertainty remains as to whether Russia and the regime forces will carry out a full-scale military offensive against the opposition via Iran-backed Shia forces. While Turkey’s position and solution package regarding the issue is welcomed by the international community, especially by the United Nations, the other stakeholders of the Astana process, Russia and Iran, reject the Turkish proposal. Two basic factors trigger the uncertainty and disagreement over Idlib between Russia and Turkey. The first is the security concerns of Russia regarding the terrorist threat emanating from HTS, which targeted Russian military bases in Syria with drones at the beginning of this year. On the other hand, the occasional confrontation between the opposition armed groups and Syrian regime forces constitute a rationale for a military offensive in Idlib. Therefore, the security concerns of Russia and the regime form the main reason for Russia to disagree with Turkey’s proposal.

The second reason is more complicated, and it might deepen the uncertainties in the region. This is the question of how the HTS is going to disarm itself and disband its organizational structure in preventing Russia to agree on Turkey’s proposal. The primary dynamic that drives these uncertainties is the ambiguity of the overall Russian strategy towards the position of the opposition groups located in the Idlib region. It is clear that Russia’s ultimate desire is to undermine the presence of all opposition groups in Idlib and to declare its military victory. The Syrian regime also shares this objective. This therefore makes the Turkish solution package more fragile and difficult to achieve – unless the Turkish government receive stronger international support. To put the matter bluntly, three questions should be asked at this stage: Does Russia think that the Turkish proposal is credible and achievable? Is the Turkish offer achievable on the ground? Does Turkey have the deterrence capacity to transform the HTS and other minor armed groups with military force? These questions cannot be answered at this stage.

It is not yet possible to state that there is full consensus between Putin and President Erdogan on the management of the Idlib crisis. However, at this stage, it is possible to say that the proposal Ankara has offered provoked Russia to re-think its position. The first pillar of the Turkish solution package consists of a “security warrant” that will be provided by Turkey to Russia in the south and to the Syrian regime forces in the northeast. According to this option, Turkey will consolidate its military presence along with the presence of the member of National Liberation Army, established by Turkey in the post-Astana process under the framework of creating a moderate opposition group and dissolving the radical elements in Idlib. Turkey will apply the same procedure towards the de facto border between the regime forces and the opposition armed groups.

After the first phase Turkey will start to implement a mechanism to enable the HTS to lay down its weapons and dissolve its military structure. This act, for sure, will take time for Turkey. With the support of Russia and Western countries, this objective is achievable. If the HTS does not accept this option, then Turkey is proposing a military solution to disband the group. Only then will the Turkish-backed moderate armed groups carry military operations against the HTS and other minor armed groups. It is possible to say that Turkey and the moderate armed groups can achieve this objective at the end of the day. According to signals coming from the ground, the HTS seems to accept the first option and tends to desire to disband its military structure. This option also depends on Russia’s intention of air bombardment. If Russia continues to carry out air strikes against the HTS, then it is difficult to say that the HTS will come close to Turkey’s offer.

The third part of the solution package is establishing a joint struggle with the terrorism issue in the Idlib region as expressed by President Erdogan, following the Tehran summit. This proposal involves creating an international dialogue mechanism to overcome extremism-related matters in the Idlib region, including foreign fighters, stabilizing refugee mobilization, and forming a stable non-conflictual region. This does not necessarily mean that an international military coalition is necessary to overcome the issue. Instead, political support for Turkey’s decisiveness and good intentions is much more important than providing military means on the ground.

This is the right time for the international society to take real responsibility in order to overcome the already deepening Syrian crisis. The violent fall of Idlib will not bring an end to the Syrian Civil War, but Idlib can provide a tremendous opportunity for Russia and the international community to find a common ground for the future of Syria. Therefore, Turkey’s struggle to find a peaceful solution to the Idlib issue should be supported.