Early Elections: Where Is Kosovo Heading?

If the LVV succeeds in forming a government on its own (with the support of the 10 non-Serbian minority seats), then reciprocity measures will likely be re-imposed in the negotiations with Serbia. 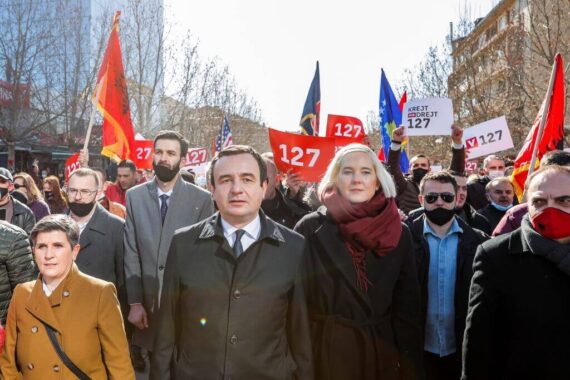 Leader of the Vetevendosje (Selfdetermination) movement Albin Kurit (C) flanked by his wife take part in a rally on the last day of the campaign for the parliamentary elections in Pristina on February 12, 2021. Photo by Stringer / AFP via Getty Images.

Kosovars are used to early parliamentary elections. Snap elections have become the rule of political life in the country as no single government has been able to complete its full four-year term in office since the country declared its independence from Serbia on February 17, 2008.

However, there are good prospects that things might change after the upcoming early elections set to be held three days before the thirteenth anniversary of the country’s independence. It is widely expected that the coalition formed by the socialist opposition party Self-determination Movement (Lëvizja Vetëvendosje LVV) and by a civic movement led by the acting President Vjosa Osmani (Albanian: LVV-Guxo) (English LVV-Dare Coalition) will emerge victorious by a wide margin.

Indeed, according to three recent polls, support for the LVV-Guxo coalition hovers around 41-46%, which would translate into 50-56 of the total 120 seats of the Kosovo parliament. Provided that it also gets the support of the ten seats reserved in the constitution for the non-Serbian minorities (Ashkali, Bosnian, Egyptian, Roma, and Turks), in practice, this means that for the first time since independence a mainstream Kosovar party will be able to form a government without the support of another mainstream party.

Read: How Turkey and Saudi Arabia Compete in the Balkans

The importance of this potential development for Kosovo cannot be overstated as a (quasi) single-party government can  bring forth a long-awaited political stability that is indispensable for domestic institutional building, advancing reciprocity in negotiations with Serbia, and last but not least, implementing a more coherent and uniform plan in the fight against the COVID-19 pandemic.

The unusually high degree of support for the LVV-Guxo coalition stems from two interrelated factors. First, the coalition’s popularity is connected to the plummeting legitimacy of the other three mainstream Kosovar parties.

As a direct impact of this flagrant mismanagement, Kosovo, having the youngest population in Europe, suffers one of the heaviest demographic hemorrhages in the region with Kosovars leaving their country in search of a better life in Europe and across the Atlantic.

Both the incumbent Democratic League of Kosovo (Lidhja Demokratike e Kosovës, LDK) and the two parties that came out of the insurgent Kosovo Liberation Army (Ushtria Çlirimtare e Kosovës UÇK), namely the former President and Prime Minister Hashim Thaçi’s Democratic Party of Kosovo (Partia Demokratike e Kosovës, PDK) and the former Prime Minister Ramush Haradinaj’s Alliance for the Future of Kosovo (Aleanca për Ardhmërine e Kosovës AAK), have ruled Kosovo together for two decades and have utterly failed to deliver any genuine and substantial reforms to the country.

They are now widely perceived as having used their glorious origins – the LDK being the party of the great Kosovar leader Ibrahim Rugova and the PDK/AAK being the successors of the rebel organization (UÇK) that fought for Kosovo’s independence – for merely “investing” in rampant state institutions , corruption, and organized crime.

As a direct impact of this flagrant mismanagement, Kosovo, having the youngest population in Europe, suffers one of the heaviest demographic hemorrhages in the region with Kosovars leaving their country in search of a better life in Europe and across the Atlantic.

The legitimacy crisis these parties were already facing received perhaps its heaviest blow in early November 2020 when then President Hashim Thaçi and three other former UÇK rebel leaders were indicted by the Kosovo Specialist Prosecutor’s Office in the Hague for crimes against humanity and war crimes during the 1998-99 Kosovo war.

This is why the charges coupled with the LVV’s main electoral message that pledges institutional reforms and to fight against corruption and organized crime resonated the most with the Kosovar public, and especially with the youth. In a sense, Kosovars want to dislodge “the old parties” from power and to give a chance to a party that has never ruled before.

Once the reformist Albin Kurti, the LVV’s leader, took over as prime minister in February 2020, he was not allowed to rule for more than 50 days.

A second and a more short-term reason for the unusually high popularity of the LVV-Guxo coalition is that the LVV is perceived as the only party that genuinely stands against the external engineering of Kosovo’s politics. The LVV emerged victorious from the October 2019 snap elections (winning 26% of the national vote), and after four months of political wrangling succeeded in striking a deal with the LDK for a coalition government.

However, once the reformist Albin Kurti, the LVV’s leader, took over as prime minister in February 2020, he was not allowed to rule for more than 50 days as his government was brought down in a no-confidence vote in parliament. The vote was initiated by Kurti’s coalition partner LDK, after overt pressure from the U.S. Embassy in Kosovo. Meanwhile, all this drama occurred in the midst of the first wave of the COVID-19 pandemic.

The Serbia Factor in the Kosovo Early Elections

Kurti’s government was brought down simply because it stood in the way of then U.S. President Donald Trump’s plan to stage a largely theatrical “economic normalization agreement” between Belgrade and Pristina in the White House. The subsequent LDK-led coalition government of Prime Minister Avdullah Hoti was largely seen as a puppet government, not least because it was a minority government supported by the Serb List, the hegemonic Serbian minority party in Kosovo that is totally subservient to Belgrade and does not recognize Kosovo’s independent statehood.

Hence, LVV’s popularity stems from its position of “self-determination” (as the party’s name itself declares) and opposition to external intervention. However, given the  popularity the U.S. enjoys in Kosovo as the country that offered the greatest support to Kosovars’ efforts for independence from Serbia, perhaps the strongest political weapon of the LDK/PDK/AAK in these elections is their consistent accusations that the LVV is “anti-American.”

Kosovo’s “old parties” are also using the “anti-American” accusation to present the LVV to Brussels and, especially, to Washington as not being subservient to their directives. In this manner, they seek to win the backing of both the U.S. and the EU. Such a thesis undoubtedly strikes a chord with Brussels and Washington given the LVV’s and its leader Albin Kurti’s rebellious past. In the past, Kurti even denounced the UN-prepared Ahtisaari Plan that became the basis for Kosovo’s independence, contending that it violates Kosovo’s right for self-determination.

If the LVV succeeds in forming a government on its own (with the support of the 10 non-Serbian minority seats), then reciprocity measures will likely be re-imposed in the negotiations with Serbia. What gives further credence to this claim is the leadership change in the White House.

As pointed out by foreign policy analyst Edward Joseph, the Trump administration during its tenure skewed the negotiations notably in favor of Belgrade, forcing Kosovo to make more concessions (most notably agreeing to suspend its efforts to join international organizations). This is why Kurti, who opposed concessions, was removed in March 2020.

Now that Trump is gone, and in light of an imminent LVV electoral victory, greater equity is expected in the negotiations. In reality, however, this does not mean we are heading towards a breakthrough in the Kosovo-Serbia negotiations. To the contrary, negotiations may stall with the LVV in office. Of all Kosovar political elites, Kurti adopts the hardest line towards Belgrade and resolutely opposes any further concessions to Serbia.

As pointed out in a recent International Crisis Group (ICG) report, Kurti’s approach to the Belgrade-Pristina negotiations is “strategic patience,” meaning that Kosovo will not make any further concessions but will instead wait until Serbia gives up and eventually recognizes Kosovo’s independence under the pressure of Brussels and Washington.

It is highly dubious that Belgrade will ever agree to undertake such a step unless it gets major concessions in return. However, the importance of a coordinated Brussels-Washington policy in bringing the sides closer to a breakthrough cannot be overstated. All major diplomatic breakthroughs in the Balkans since the end of the Cold War have occurred through a close transatlantic coordination/partnership.

With a new administration in Washington seemingly committed to mending transatlantic ties, the path of a breakthrough in the Kosovo-Serbia dispute will definitely follow suit. It is true that Albin Kurti may soften his stance once he takes over the premiership and serves a full term. However, to coax both Kosovar and Serbian political elites eventually into more constructive positions, a coordinated transatlantic push is indispensable.

Idlir Lika is an assistant professor of Political Science and International Relations at Istanbul Gelişim University. Lika specializes in comparative politics of ethnicity/nationalism and Southeast European politics. His research has been published by leading area studies journals such as Mediterranean Politics and Problems of Post-Communism.

Also Read
What does the French Democracy Crisis Indicate?