The temporary freezing of the EU-China trade deal may give time to the Biden administration to shift the directions of the EU’s policy on China in its favor. 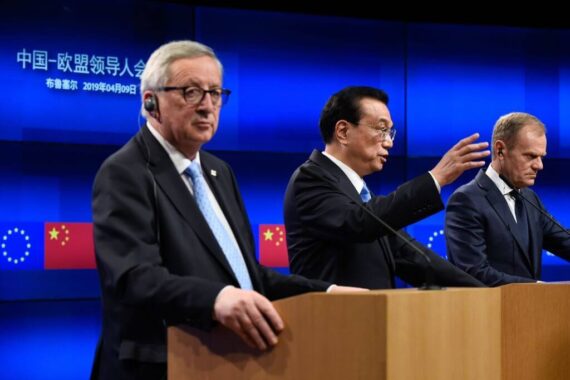 After seven years of negotiations, The European Union (EU) paused a trade deal with China over a battle of sanctions and counter-sanctions.

The E.U. and China signed the fundamentals of the Comprehensive Agreement on Investment (CAI) in December 2020. The trade deal aims to guarantee a stable framework of conditions for trade and investment in each other’s markets. But to enter into force, the trade deal needs ratification from the E.U. member states and the European Parliament, where it faces vigorous opposition.

The E.U. imposed sanctions against China’s violation of human rights on the Uyghur Muslims in the Xinjiang region on March 22, 2021. It is the first time that the E.U. imposes these sanctions against China since the 1989 Tiananmen Square massacre. As a response, China sanctioned several E.U. citizens, including five members of the E.U. Parliament and E.U. human rights and security committee members. China’s foreign ministry specified that all relevant personnel and their family members will be prohibited from entering mainland China and its administered regions.

China’s retaliation against the E.U. members sparked concern among European representatives. “China’s sanctions on MEPs, the Human Rights Subcommittee, and E.U. bodies are unacceptable and will have consequences,” tweeted President of the European Parliament Davide Sassoli. But the remark over the violations of human rights on Uyghurs was anticipated by the President of the European Commission Ursula Von Del Leyen in the E.U.-China summit in June 2020, where she reiterated that human rights and fundamental freedoms were non-negotiable for the E.U.

The Chinese Foreign Ministry stated that the accusations on human rights issues in Xinjiang are based “on nothing but lies and disinformation. Moreover, it highlights that the European sanctions interfere in China’s internal affairs and undermine China-EU relations.”

Amid the battle of sanctions and countersanctions, U.S. President Joe Biden can breathe a sigh of relief over the EU-China trade deal. Following the freeze of the deal, the United States, Canada, and the United Kingdom joined the E.U. sanctioning China. U.S. Secretary of the State Antony Blinked welcomed the European sanctions by describing the coordinated sanctions as a “united transatlantic response” to those who violate or abuse international human rights.

But for the United States, the stake of the E.U.-China trade deal is much bigger than a trade agreement. Biden aims to end unilateralism and seek a united front with the E.U., Japan, and other partners in its trade war with China. Thus, the CAI could represent a serious risk to achieve his goal.

The CAI eases the market access between the E.U. and China. China will provide a higher level of access for several sectors and guarantee fair treatment for E.U. companies. Furthermore, the CAI regulates forced technology transfer by prohibiting several investment requirements that obstacle the technology transfer.

In a nutshell, the trade deal would provide companies with a much safer environment for conducting their business, especially in general manufacturing industries, the automotive sector, and financial services. If implemented by China, those CAI could advantage E.U. businesses, but it would disadvantage U.S. competitors.

Both German and French companies are among those European firms that would benefit more from the E.U.-China investment.

In the E.U., politicians and human rights activists are concerned about whether Europe should be deepening its economic ties with China. This not only because of the issues over Uyghurs but also due to China’s policy in Hong Kong and its use of mass surveillance technologies. Furthermore, E.U. diplomats and officials have also criticized German Chancellor Angela Merkel and French President Emmanuel Macron’s push to finalize the deal with China.

However, Merkel aligned herself with the E.U. message to Beijing speaking at a press conference at the G-7 summit held in Cornwall, United Kingdom, last week. She warned that the E.U. will only ratify its investment agreement if China makes progress on labor rights.

The United States would be damaged in the framework of an E.U.-China deal. The most beneficiary of the trade deal would be European companies due to easier access to the Chinese economic infrastructure. For its part, China would attract more investments and could place itself in a favored position.

At the geopolitical level, the United States wants to restabilize ties with the E.U. and divert European attention from the appealing Chinese economic opportunities. China made some progress in expanding its influence during the Trump administration. Thus, the E.U.-China deal would impact the Biden administration’s efforts to unify the front to increase leverage on China.

But the tension raised over the violation of human rights marks a shift in the E.U.’s policy of achieving closer economic ties with China. Also, the latest G-7 summit seems to have strengthened the relations between the United States and the European countries over China. However, the E.U. is cautious. It bears in mind and acknowledges the importance of China not only as an economic party but also as a partner in climate change cooperation.

As Biden aims to freshen up the transatlantic cooperation to contain Beijing, European countries are much more cautious to unravel the economic ties with China. The E.U.-China economic relations benefit both powers. In 2019, the E.U. was China’s biggest trading partner, while China was the E.U.’s second-largest partner. The E.U.-China trade in goods is worth around €1.5 billion a day. Moreover, the E.U.-China import-export was worth almost 500 billion in 2019, according to the E.U. figures.

In this economic framework, it is hard to believe that the E.U. will cut the “New Silk Road” with China. The freeze of the deal doesn’t mean that it could be revived. However, China will have to work hard with its diplomacy and lift sanctions on the E.U., if it wants to finalize the trade deal.

In the E.U., the debate over China is still in process. Although all European countries agree to condemn violations of human rights in China, France and Germany push at the same time on the importance of the trade deal. The president of the European Council Charles Michel defended the deal with China. “For the first time we are taking a step to facilitate investment by European companies and also, based on this proposed agreement, there are commitments expressed by the Chinese authorities on social rights,” he said in a press conference ahead of the G-7 summit.

The temporary freezing of the E.U.-China trade deal may give time to the Biden administration to shift the directions of the E.U.’s policy on China in its favor. But to resume the deal, China will have to relax its diplomatic relations with the E.U. and sweeten the European concerns over the violations of human rights perpetrated in the Xinjiang region. Although it seems united under the defense of human rights in China, the E.U. is not to lose the opportunity to achieve a deal with China. Such a need doesn’t lie only in its interests but also in the necessity to involve China in climate change cooperation.