For Turkey, this is a golden opportunity to make the best use of its leverage to increase state security. 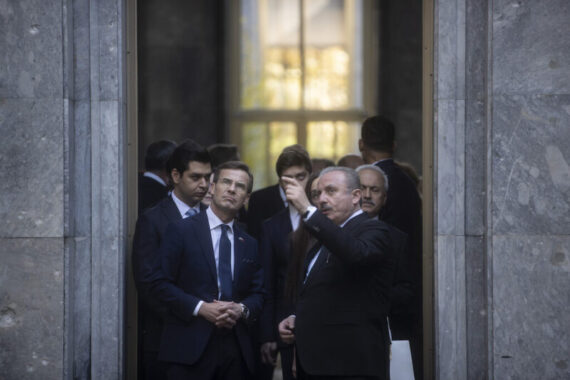 inland and Sweden’s political aspiration to join NATO has been on a rocky and problematic path. After some years of grooming Finnish and Swedish officials on joining NATO, the countries abandoned their individual grand strategies of national survival, used to navigate the geopolitical risks and obstacles of the old Cold War, and opted away from military non-alignment, present on paper only.

Sweden is attempting to opt out of the idea of a Swedish model to be exported to the world and the notion of Swedish exceptionalism, and throw its efforts into joining the declining Western-centric, United States-led unipolar order (together with the institution of Western liberalism). Thus, the Finnish and Swedish governments, of their own free will and volition, have chosen to become objects and not subjects at a point in time that sees a shift and evolution in the global geopolitical order.

It seemed that Finland and Sweden assumed that there will be no obstacles to their anticipated smooth entry into NATO, a product of a sense of self-entitlement and spending too much time in the echo chamber that is the divisive ideological environment of Western liberalism.

There were hints and signs from several NATO members that would or could potentially delay the process. After years of arrogant and didactic lecturing from Sweden to the non-Western world on the ethical righteousness and superiority of Swedish values and norms, their theoretical model of Swedish liberalism (with an “exceptional” twist) met and clashed with the model of Turkish realism.

Western decline is a complex and multidimensional interaction in international relations in an era when the power and influence capabilities and capacities of core Western liberal countries are in a state of relative decay and decline. It includes various dimensions such as ideology versus pragmatism and liberalism versus realism, where a clash of wills and perceptions is taking place in a hyper-politicised environment. In spite of what Finland and Sweden may think, based upon their assumptions of moral superiority, it is Turkey that holds the trump card in this international negotiation.

Perhaps, coming to the realization that Turkey held the high ground in the negotiation process, there was the appearance of agreement by Finland and Sweden as signaled in official information sources on the NATO membership process. Western mainstream media discourse places the blame on Turkey for delaying the process without engaging in the reasons for the delay. This is also very much part of the negotiation process: using information channels to cognitively coerce Turkey into making concessions for emotional reasons rather than the real underlying pragmatic reasons.

Read: Sweden and Finland NATO Membership and the Militarization of the Baltic Sea

Why are Sweden and Finland hesitant?

There is a great deal of hesitancy by the Finnish and Swedish governments to meet the Turkish conditions for agreeing to their membership. The source of this hesitancy is found in the level of political risk among the voter constituencies that would react strongly. Although Finland and Sweden acted in bad faith in their negotiations already, they believe and try and present themselves as being the victims and that eventually Turkey will give them what they want.

In particular, it would likely prove to be political suicide for a Finnish or Swedish government to extradite the individuals named by Turkey; the unwillingness to co-operate is instead blamed on legal obstacles. However, the true concern is a political backlash by voters.

This creates a conundrum and dilemma for Finnish and Swedish policymakers. On the one hand, there is the desired “holy grail” of NATO membership and full integration into the Western-centric world from an ideological and political point of view. On the other hand, the likely high political costs of achieving this goal by granting Turkey the necessary assurances. The cost-benefit ratio for Turkey is somewhat different, where the costs of permitting membership are not high from a technical and administrative perspective.

For Turkey, this is a golden opportunity to make the best use of its leverage to increase state security. The PKK is a significant state and human security concern for Turkey as the death toll from its terrorist acts continuously increases. Turkey cannot compromise on the issue of security, placing the necessity to concede on Finland and Sweden.

It would appear that the Finnish and Swedish governments are trying to gradually wear down Turkish resolve on the NATO membership question, and based on their presumptive public statements, they assume that time is on their side. However, this would only be valid if Turkey perceived itself at a power and time disadvantage to its counterparts, when the reverse is actually true.

Formal NATO membership is a very high political priority for the Finnish and Swedish governments. There are certain steps to achieve this goal, but the two governments do not want to take the required steps owing to the constraints and restraints of domestic politics. At the same time, provocative public acts of political activism in Sweden are bound to guarantee that Turkey as a matter of honor remains ever more resolute on its terms and conditions.

Also Read
Turkey-Egypt Relations: Prospects for Normalization and Challenges Ahead