A reason for the Turkish reservations about Sweden’s and Finland’s membership is the arms embargo on the Turkish defense industry. 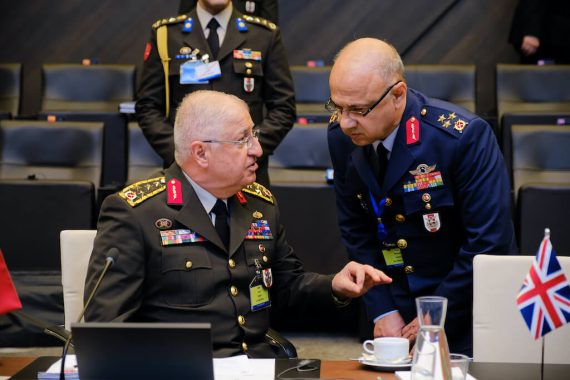 Alliances are permanent institutions of mutual guarantees to the constituent parties that require long-term, stable, and determined commitments. Once the alliance is set up, the partners invest their faith in survivability. Yet, selecting the party on which to rely for the guarantee of a smooth future should not be a fait accompli. NATO is not an exception to this calculus because each member brings its own interests, security concerns, or complicated geopolitical environment.

The reason for this calculus is the mutual burden on the members of the alliance. The initial calculation is the contributed surplus of the member state to the overall structure of the alliance and other members as well. The second calculation is the structure of, say NATO, and security coverage addressing the individual and collective security concerns. These two give-and-take calculi form the parameters for membership that has pains and gains for the designed collective security architecture.

If the current debates on—or Turkish reservations regarding—the application by Sweden and Finland for NATO membership are reviewed, the calculus of the alliance, per the identified parameters, can expose the pains and gains for these countries, NATO, and, specifically, Turkey.

Read: Sweden and Finland NATO Membership and the Militarization of the Baltic Sea

Sweden and Finland are rather small-sized states in terms of demography and military posture. The Russian aggression in Ukraine, as a potential pattern during the coming decades, has pushed them to review the possibility in case a war escalates in the vicinity. The population of Sweden is a little more than 10 million while Finland’s is around 5.5 million. The median ages are 41.1 and 42.8 respectively, and population growth rates are 0.74% and 0.26% respectively.

The land mass of Sweden is 338,450 square km and that of Finland 447,430. The fit for service military manpower in Sweden is 3.4 million and in Finland 1.9 million. On duty active forces in the militaries of Sweden are 22,000 and in Finland 16,000 except for a small number of paramilitary forces. The defense budget of Sweden is $8.60 billion and Finland’s is $6.03 billion; both are lower than the average defense budgets of NATO countries, except for the very small-sized ones such as Montenegro and Latvia.

Given the above facts and figures, the military capacities of both Sweden and Finland are highly limited to respond to any external conventional threat, which makes the two countries potentially dependent on foreign security guarantees in the realm of Russian conventional and unconventional threats. Meanwhile the contribution of Sweden and Finland to their own security is very limited due to the low level of military preparedness and the geopolitical positioning in the security architecture of the Baltic Sea.

Regarding NATO’s potential pain and gain calculi, Finland and Sweden are riparian states to the Baltic Sea, and NATO has to expand and restructure its military forces to defend them. Besides, the Russian countermove through repositioning its nuclear forces and contingency planning will make tensions in a very narrow strip, the Baltic, greatly escalate due to air patrols, naval presence, and intelligence warfare of peacetime.

Such vigilance will push NATO to add another two countries to the security coverage list. The burden of the membership of these two countries, then, will increase the level of risk for NATO.

Turkey’s security concerns and expectations from Sweden and Finland are the accumulation of almost four decades of experience and interaction with these countries, mainly with Sweden. As President Erdoğan and Foreign Minister Çavuşoğlu articulated in media statements, there are two issues that are pushing Turkey to consider the veto option against the countries joining NATO.

The first is the terror threat to Turkey that both countries directly challenge with their security perceptions of the PKK, and the second is the arms embargo against Turkey.

Sweden hosts a considerable number of FETO and PKK/PYD/YPG offshoots that facilitate these organizations’ work with wider Europe against Turkish interests through fundraising, propaganda, and conscription. There are eleven PKK-affiliated organizations in Sweden, besides four media institutions, which receive funding from the Swedish government.

The efficacy of terror propaganda in Sweden is also evident in another significant figure: the number of Swedish conscripts in the PKK which was around 50 in 2017. Furthermore, the PKK had built a Scandinavian Brigade in its cadre under the pretense of fighting DAESH, though these individuals fought against the Turkish military.

Another interesting fact about Sweden is the paradox that makes the current policy of the Swedish government questionable. As Sweden became a safe haven for PKK terrorists in 1984, an internal dispute among them broke out. Due to disagreements among PKK cells, the PKK leadership in Sweden carried out executions against dissident members.

Targeting PKK dissident members mobilized the Swedish government to deport eighteen PKK members which led to the alleged assassination of Prime Minister Olof Palme on February 28, 1986, by the PKK, according to the confessions of Semdin Sakik, an arrested PKK leader. The current Swedish government, from the point of view of the Turkish leadership, tolerates, facilitates, and protects the existence of these PKK cells despite their alleged role in the assassination of Olof Palme.

Turkey is concerned about the Swedish grants to terror cells in the form of direct funding and arms supply at no cost. In 2021, it has been assessed that Sweden granted the PKK/PYD/YPG $376 million—a development that is strongly opposed by Turkey. This funding goes to the PKK/PYD/YPG despite the fact that the PKK and its sister organizations in Syria and Iraq continuously plot terror attacks on Turkish soldiers and Syrian civilians.

Another hotspot is the “hosted” FETO members in these countries. FETO members are gradually offered permanent residence and citizenship while having the privilege of occupying roles at universities and think tanks, mainly provoking malign narratives against Turkey.  Ankara has shared arrest warrants with the Ministries of Justice of these states with adequate proof for indictment, but neither Sweden nor Finland have arrested and deported these individuals.

The second reason for the Turkish reservations about Sweden’s and Finland’s membership is the arms embargo of their governments on the Turkish defense industry. In addition to certain European countries and the U.S. implementation of either overt or covert embargos on Turkey, two additional countries adopt the same policy: Sweden and Finland. The current escalation in Ukraine is a clear indicator that any embargo on Turkey will weaken the defense capacity of NATO.

In this sense, Turkey’s approach is to handle this constraint with all NATO member states and with these two countries. Sweden was very committed to calling for an arms embargo on Turkey in October 2021 due to Ankara’s military campaigns against the PKK/PYD/YPG.

After all, Sweden and Finland will gain more by becoming NATO members whereby they will enjoy a heightened sense of security, especially against potential risks and threats. NATO will bear the burden of their desire to join the alliance, which will have limited gains from their membership. Turkey had to sacrifice the lives of Turkish soldiers in Korea with a 22% casualty ratio in the three years of the Korean War.

Sweden’s and Finland’s quest is to become NATO members leaning on the EU solidarity while taking upon themselves a very limited burden. In this calculus, Sweden and Finland benefit from NATO membership while contributing a very limited military capacity to the alliance. Given the expectation that allies defend each other against all sorts of threats, both hard and soft of the current age, Turkey has lost trust in Sweden and, to some extent, Finland due to their long-lasting, anti-Turkey malign activities.

Consequently, Swedes and Finns must agree to give up their malign activities against Turkey, a future ally, which in turn would commit to sacrificing the lives of Turkish soldiers in order to guarantee their security as NATO members.