Finland and Sweden developed a historical neutral status due to negative experiences from engaging in war, which proved to be very destructive. 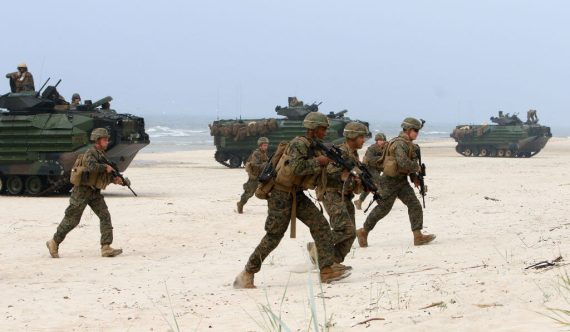 US soldiers take part in a massive amphibious landing during the Exercise Baltic Operations (BALTOPS), a NATO maritime-focused military multinational exercise, on June 4, 2018 in Nemirseta on the Baltic sea in Lithuania. Photo by Petras Malukas, AFP via Getty Images

When the war broke out in Ukraine on February 24, 2022, many observers were caught by surprise in spite of the dire predictions and warnings in reporting by mainstream Western media. The “old” global crisis of the COVID19 pandemic was quickly relegated to a secondary role and replaced in the headlines with the Russia-Ukraine war.

However, a lot of the reporting and analyses from Western countries have drawn global generalizations based on Western-centric values and interests. These generalizations, in turn, have informed and influenced the Western world’s perception, understanding, and reactions to the events unfolding in Ukraine. In the long run, such reporting concludes that the process may incur unforeseen or unanticipated threats and expose weaknesses for countries seeking to integrate further into the Euro-Atlantic structures as a pre-emptive security measure.

The shock effect of the Russia-Ukraine war

Russia’s invasion of Ukraine caught various international observers by surprise, not the least, owing to the almost universal belief that the various threatened sanctions would mean that costs would outweigh any benefits of a military campaign.

The lack of foresight and predictions hints at a possible divergence in international relations between the U.S. unipolar global order and the countries and civilizations that fall beyond this geopolitical realm. There has been an expected international shock and uncertainty caused by the war, but it has been far from a universal condemnation of Russia for launching its military operation against Ukraine.

What seems to have happened in this increasing global divide between Western and non-Western countries is a growing gap in national interests, values, and perceptions with the process already beginning before the current Ukraine war. The idea of global messianic universalism under Western leadership—especially that of the United States—is fading away as the world grows more diverse and unstable in the wake of Western ascendency after the outcomes of the Cold War.

Although a physical war is taking place in Ukraine, its implications and repercussions are much wider in the context of the United States seeking to defend its global hegemonic position against countries such as China and Russia.

Read: Russia-Ukraine War Unified EU and NATO As Never Before

The resulting political and geopolitical tensions that stemmed from the Ukraine war have given pause to various countries to consider their foreign and security policy identity, and their role in the international relations system. Some countries have moved away from the position of the U.S.-led, Western-centric world, even when pressured to conform, such as India.

Other countries, such as Finland and Sweden, have re-evaluated their historically informed and practiced identity and policy of neutrality or non-alignment, and are considering whether to align even more deeply with Euro-Atlantic institutional structures through NATO membership.

Finland and Sweden both developed a historical neutral/non-aligned status due to negative experiences from engaging in war, where war proved to be very destructive and costly. This strategy of non-alignment was intended to serve countries in navigating the pitfalls for small powers caught in the geopolitical games of powerful geopolitical actors. The objective was to try and preserve Finland and Sweden as subjects and not objects in international relations.

Finland learned a particularly painful lesson in the wake of the Soviet Union’s attack on the country in the 1939-40 Winter War, and the subsequent alignment with Nazi Germany to remedy those territorial loses in the 1941-44 Continuation War, which proved to be disastrous.

A hard lesson was learned on the risks of being a junior partner to a larger military power. Therefore, a more nuanced and independent foreign and security policy was pursued in order to ensure national interests could be protected without foreign entanglements.

However, there have been an increasing number of events and attempts to push Finnish and Swedish public opinion incrementally towards the NATO membership option. NATO has been actively lobbying both countries through diplomatic activities to join the alliance. There were also highly publicized events of the unconfirmed “Russian submarines” in Helsinki Harbor and the Stockholm Archipelago, which increased public support for NATO membership.

Sweden has been increasingly integrating with NATO before the Russia-Ukraine War broke out, for example, by hosting military exercises with NATO forces in Exercise Aurora. These efforts to shift public opinion towards a more favorable view of NATO membership have been based on fear: the fear of something bad happening (see Russian military attack), and that something bad can happen to the citizens of both countries. This is captured in the parting words of former U.S. ambassador to Sweden, Mark Brzezinski, who said that NATO was like an insurance policy for Sweden.

Even though Finland and Sweden are not yet NATO members, they both gave up the policy of neutrality long ago. When the war in Ukraine broke out, Sweden initially rejected any consideration of joining NATO and the Swedish prime minister stated that the country had no such intentions.

The underlying reason given by Sweden for not wanting to join NATO was that to do so would destabilize the Northern European security. This stood in contrast to the Finnish prime minister who promised a quick public debate on the issue of NATO membership.

However, Sweden’s official government position on the NATO question changed to align with Finland’s, with both countries pledging to decide on the matter by the end of June 2022. The war in Ukraine has successfully shaped a slight majority of public opinion in favor of joining NATO in both countries, although this all comes in a time of war and through the use of fear. The Swedish and Finish decision on exploring the NATO option is likely to have been decided before the Russia-Ukraine war at the political level, and it still requires time and circumstance to engineer public consent.

Possible consequences of NATO expansion in the Baltic Sea

The dilemmas of Finland and Sweden are tied to the current environment of politics of perceived risk. These mainly pertain to risk considerations such as Russia’s border politics, lack of hard security capacity, and potential dangers posed by Russia owing to perceptions of unpredictability and lack of reliability.

However, by seeking NATO membership, there are multiple risks. Finland and Sweden joining NATO may be seen as a de facto declaration of war against Russia; they will become entangled in great power politics that is not in their national interests; it is likely to harm bilateral relations and issues of collaboration/cooperation; they will lose the independent ability to influence and manage foreign relations with Russia; and they will be at the frontline of any possible wider armed conflict, if one were to break out.

Certainly, Russia has warned of the consequences of Finland and/or Sweden joining NATO given their perception of security interests being further compromised by the U.S.-led alliance. In addition to a likely Russian military redeployment to take into account the new status of Finland and Sweden, there are also likely to be political and economic consequences of joining NATO.

It would also spell a likely end to initiatives of a non-nuclear Baltic region and negatively impact Sweden’s initiatives to influence the world in a positive direction—for example the obvious contradictions that will arise with its “humanitarian superpower” brand and feminist foreign policy.

A new iron curtain for a new Cold War?

In recent years, as the multipolar order gained strength and influence, there have been increasing discussions and speculations about a “New Cold War.”. Given the global effects on international relations, there seems to be a new Iron Curtain descending not only on Europe but across the entire globe, which divides the Western-centric and non-Western centric powers. This is a point in time when the U.S. seeks to claim back its global hegemony, which increases the risks for everyone owing to a volatile global geopolitical polarization.

There have been a number of worrying public statements that suggest and confirm that the war in Ukraine concerns much more than the territorial integrity and sovereignty of the country. In a relatively underexposed moment of clarity, General Curtis Scaparrotti, the former Commander of the United States European Command and NATO’s Supreme Allied Commander, Europe,  stated, “We are in a proxy war with Russia. We are using the Ukrainians as our proxy forces.”

More recently, the U.S. Secretary of Defense Lloyd Austin stated that the U.S. wants to weaken Russia. Messaging of a U.S. proxy war against Russia has been echoed by former U.S. secretary of defense Leon Panetta. In other words, apart from the political and geopolitical repercussions and consequences of the war in Ukraine, there are also strong economic shocks that will be further exacerbated by the Western world’s sanctions against Russia for invading Ukraine.