No doubt, meanwhile, that the future lies in food security, technology, and agriculture. 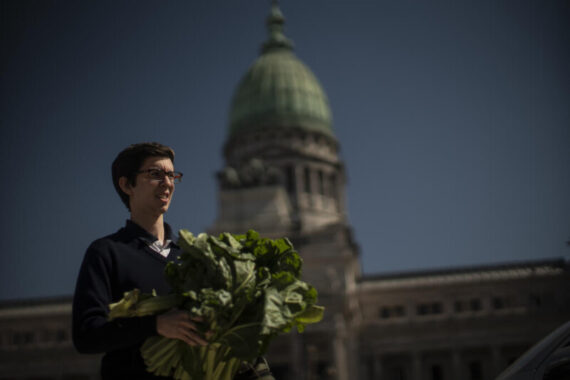 A man looks for vegetables that farm workers give away as a protest against hunger in Buenos Aires, Argentina, Sept. 6, 2022. Photo by Pablo Barrera. Anadolu Images.

t has been two months since the United Nations and Turkey brokered the Black Sea Grain Initiative on July 27 in Istanbul. The agreement resumed Ukrainian grain exports, and paved the way for Russian grain, fertilizer, and food exports to reach the outside world. According to the UN, since the agreement, almost 5 million tons of food and grain have been shipped over the Black Sea Corridor. The agreement is, therefore, expected to mitigate the global food crisis.

Data by the UN Food and Agriculture Organization (FAO) shows a recent sharp decline in food prices. The FAO Food Index is currently at 138 (August 2022), down from the all-time high of 160 in March 2022. (Fig. 1) However, food prices are still about 8% higher compared to the same period a year ago. On the other hand, in the past three months, wheat prices are down by almost 25-30%, according to the FAO.

In this sense, the global food crisis, increasing food security risks, and even a mass hunger risk, along with the significance of the recent grain export deal have been the most remarkable developments of—at least— the past few months. At this point, probably the most critical issues and questions facing the world economy and humanity are food security, which is getting more and more risky, living costs, and nutritional security.

Moreover, the UN World Food Program (WFP) data shows that for every 1% increase in global hunger or food security risk, there is a 2% increase in migration waves. The UN refugee agency statistics further reveal that the main reason for 67% of people leaving their homes in 2021 was food security. For war-torn 2022, these numbers hold little promise.

Many grain import-dependent countries from North Africa and the Middle East to South Asia are experiencing the effects of this global food crisis more intensely. Hence, the recent war in Ukraine is also an important wake-up call, reminding all world economies of how important self-sufficiency is, especially in strategic sectors like agriculture or food in general.

Turkey-led talks and the agreement to allow grain exports from Ukraine became a major achievement for Ankara. This is critical in particular since almost a third of the grain supplies of the world are provided by Russia and Ukraine. The agreement was the result of the Turkish efforts of the previous two months, leading to the deal in July, and Turkey has been rightfully given sizable credit for brokering the deal between Ukraine and Russia.

The grain export agreement, signed under Turkish and UN safeguard, ensures food security, and has helped resume shipments from Ukraine to the rest of the world. The world economy will further breathe from this new Black Sea grain export corridor. After all, billions of people from Africa to the Middle East and South Asia are affected by the recent surge of hunger risk.

The Black Sea Grain Initiative was a huge diplomatic success, and a political and strategic victory for Turkey and the world. Furthermore, it was a critical step forward to ensure global food security, in particular considering that the world is facing a large-scale international food crisis. The deal is, hence, expected to once again increase Turkey’s importance and influence in the region and around the world.

Despite the low trust on both sides, Turkey, as a trusted mediator, secured a final agreement. Currently, Turkey is also mediating for a potential full-scale peace treaty, and has helped arrange a major critical prisoner exchange between the two warring countries.

Agricultural products, energy prices, food prices, and commodity prices should all be expected to be impacted by this deal, and the resulting resumed supply and security enhancements. Indeed, as of mid-August, wheat prices were already down by 30-40% compared to May 2022. Wheat futures are also somewhere around $8 nowadays.

According to the UN FAO data, food prices were already at their 10-year peak by 2021. With the war, prices have escalated due to decreases in production, the disruption of the Black Sea-centered grain supply chain, rising insurance and transportation costs, and the increase in concerns about supply security.

Figure 1: FAO Food Price Index since the beginning of the 1990s to August 2022. Source: Food and Agriculture Organization (FAO) of the United Nations and author

Following the outbreak of the war in Ukraine, the FAO Food Price Index (FFPI) rose 13% month on month to 159.7—the new all-time high—in March 2022. (Fig. 1) From April to August 2022, partial regressions took place and the FFPI index averaged down to 138. However, after the deal, and along with the grain shipments out of Ukraine, wheat prices were down by 30-40% below their peak in spring 2022.

– decreasing the food and grain prices in general,

– encouraging Ukrainians to sow seeds for the next season, and

Production losses due to heatwaves, droughts, etc. will be also replaced. Food inflation will be limited and taken under control.

The Black Sea Grain Initiative is expected to mitigate the global food crisis and amplify food security, but it also bears the clear signs of

– the growing strategic and political importance of Turkey,

– the increasing importance of the Black Sea Grain Corridor, and

– Russia and Ukraine’s dominance in the global grain and food market.

In order to understand the situation better, one needs to understand the current global food crisis and the bigger picture. For instance, Russia and Ukraine are two major global wheat suppliers. Together they produce almost a third of the global wheat supply, provide almost one-third of all wheat exports, and a quarter of all grain exports. Approximately one-fourth of the $120 billion global grain trade is provided by Ukraine and Russia.

According to the 2020 UN FAO data, Ukraine supplies 92% of Moldova’s wheat imports, 81% of Lebanon’s, 64% of Qatar’s, and almost 50% of Tunisia’s, Libya’s and Pakistan’s imports. Twenty-six different countries import at least half of their wheat imports from Russia or Ukraine.

Due to its relatively high dependence on Russia, the prices of food and energy in Europe are rising the most, as the European economies are broadly the ones most affected by the war. Surging energy and food prices have led to 30-year high inflation rates in the European Union—in some cases, to a 40-year high. Unemployment rates are also on the rise. Meanwhile, this trend affects the poor disproportionately. The International Monetary Fund (IMF) has a downward revised growth rate forecast of 2.6% for the euro area in 2022.

Food and energy security are the two most critical issues the world is facing today. In particular, the Russia-Ukraine war, which started on February 24, 2022, has deepened the global food crisis. The grain and food shortages are expected to affect the neighboring Middle Eastern and African economies highly. Food insecurity is also expected to trigger new waves of migration towards Turkey and Europe, and is, therefore, a security issue as well.

Food has been a strategic issue in the overpopulated and inequality-prone 21st century. The post-pandemic demand surge, supply chain issues, drought, climate change, and stocking habits have all deteriorated the situation. International organizations such as the World Bank, the IMF, and the FAO all consider the current food crisis (and the commodity crisis in general) as a critical issue that needs to be taken seriously. Meanwhile, the ongoing food crisis is expected to go on for at least another year.

There is no doubt, meanwhile, that the future lies in food security, technology, and agriculture. Agriculture and food are considered among the most strategic sectors of the new century. By 2050, the world population is expected to reach 9 billion, and 70% of this population will live in urban areas. Hence, food security will be a much more critical issue looking forward.

That said, the war in Ukraine is further increasing food, energy, fertilizers, and pesticide prices. Supply chain issues, especially in the Black Sea supply chain and grain corridor, are increasing insurance and logistic costs for all types of exports. Therefore, today’s food crisis and hunger risk should be seen as a global problem and an ever-mounting challenge that needs to be addressed urgently.

The deal brokering the food supplies between Ukraine and many international buyers will also help Turkey improve its macro-financial parameters and, in particular, the food prices that impact the current Turkish economy. One of the critical factors in Turkish inflation figures is rising food prices. Meanwhile, Russia and Ukraine are both among the leading Turkish trade partners. Therefore, the end of the Russia-Ukraine war and a new peace process are also very important for the Turkish economy.