Inflation is here to stay and the world needs a healing touch, now perhaps, more than ever. 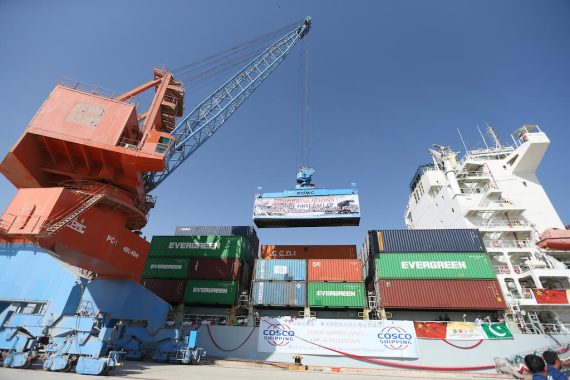 A ship carrying containers are seen during the opening of a trade project in Gwadar port, west of Karachi, Pakistan. Photo by Metin Aktas, Anadolu Images

The year 1996 saw the publication of Roger Bootle’s provocatively titled book The Death of Inflation, which argued that inflation was no more the threat it used to be and fixation with keeping prices low can hamper growth unnecessarily. The book is a compelling read. Yet, the challenges brought about by the pandemic may be in conflict with the optimism in it, as reflected in Bootle’s own columns and interview.

COVID19 did not just catch the global health infrastructure off guard, but wreaked havoc on the world economy as well, particularly in terms of ushering in an era of intractable inflation. Here’s a look at how the infection jumped from person to person, eventually subduing the economy, and throwing demand and supply into a nagging imbalance.

The demand side: The virus and the price of your groceries

Faced with sudden outbreaks, panicking governments the world over were left with no choice but to swallow the bitter pill of lockdowns. It was clear that there was no alternative, at least in the short run. The policy helped control the contagion, but not without business closures and job losses. This, in turn, raised a natural question: how to help the common person muddle through the crisis with the economy at a standstill?

Almost all economists favored economic stimulus—financial help from the government channelled through the fiscal and/or monetary policies—but answers to how, how much, when, and where varied drastically.

Most governments around the world offered one kind of stimulus or another. Yet some countries with the highest stimuli—say, Canada, Germany, Spain, or the United Kingdom—are now experiencing record inflation.

Inflation in the United States, the country with perhaps the largest stimulus packages, has hit a 40-year high, with prices this March being 8.5% higher than March last year. This has meant the average household having to spend nearly $327 more per month than they used to, a year ago.

After all, if one gets up one fine morning and finds a serendipitous check at their doorstep, which literally happened in the U.S., sooner or later, they are going to go shopping, i.e., demand increases. But the neighborhood grocer has limited items, i.e., supply remains the same. More people running after scarce goods made the prices rise, as it does. This effect was worse in service industries, where some businesses even had to pack up.

Arguably, the stimulus packages, while helping the economies recover, perhaps also created conditions for high inflation by encouraging consumption. While stimuli may be more conspicuous in the advanced economies, almost all economies offered some kind of stimulus, swelling their fiscal deficits, as governments increased spending to make up for the fall in economic activity.

The supply side: The rising costs of production

Yet, to fault the economic stimulus for inflation would be somewhat simplistic. Many economists expected such inflation to be transitory—short-lived—after all. Transitory, it could have been, if it hadn’t been for the surge in the price of oil.

Note that COVID19 had initially caused inflation because of the sky-rocketing costs of shipping, supply chain disruptions, erratic demand, and international business desynchronization due to asynchronous outbreaks. Economic activity had plummeted, sending oil demand—and its price—into a free fall.

One of the reasons the oil price fell is that oil supply is relatively “inelastic” in the short run. That is to say, oil companies cannot cut down on oil production suddenly. These are giant enterprises with fixed, long-term costs. As demand vanished due to the virus—and supply could not suddenly be scaled back immediately—oil flushed markets, and oil price fell drastically.

This should have made everything cheaper. But as economies recovered, often with a sharp, V-shaped recovery, thanks to the vaccines, the demand for oil rebounded phenomenally. So much so that even though the world economy still has not fully recovered from the pandemic, oil demand may have already surpassed its pre-pandemic levels.

The resurgence in oil demand—with limited supply available—made the prices skyrocket, from a record low of minus $40 per barrel at the start of the pandemic to around $120 per barrel now.

Yet of course, this rise is not without the added conundrum of Putin’s war on Ukraine. Supply disruptions due to the war, with the added effect of sanctions, and now an embargo, have worsened the spike in energy, both oil and gas, prices, given the fact that Russia is among the top three producers of crude oil, and the second largest producer of natural gas in the world.

In addition, uncertainty brought by the war has affected investment and financial markets the world over. Stock markets have been bearish. Businesses are having to look for alternative trading partners. These factors, along with higher oil prices, are making costs of businesses soar, leading to “cost-push inflation”—higher prices arising from higher costs of production.

The outlook is not good as yet, and the distressed need help

Together, resurgence in demand after quick initial recovery, and a fall in global supply due to higher costs of production, have translated into an indomitable surge in prices the world over. Turkey has seen prices rise by 70% between April 2022 and April last year.

The corresponding figure for Argentina stands at 58%, and for Venezuela, Sudan, and Lebanon, at over 200%. While inflation in these countries may not be attributable exclusively to the above stated factors, as these economies were already stuck in macroeconomic blues—sometimes trying their luck with unorthodox policies—the pandemic and war have complicated things considerably. Even in advanced economies, the IMF estimates a 38-year high record inflation for the current year.

Average incomes, in turn, will grow only modestly this year, as reflected in the world GDP forecasts being revised over and over again. While growth in the oil-exporting Gulf economies forms an exception, as they are benefiting from higher energy prices, even those will not be immune to food inflation, considering 85% of their food comes from imports.

But the outlook for the developing economies is particularly concerning. They are facing capital flight as investors opt for higher return in the advanced economies, where interest rates are rising, pushing the indebted countries closer to default. This will further pressure stressed currencies, worsening inflation, with more countries having to knock the IMF’s door, sooner or later. Calls for international financial institutions to take a more helpful role to help the distressed countries are, understandably, increasing.

Likewise, devising a careful policy at the national level may be crucial to people’s livelihoods. It may be argued that governments need to prioritize fighting inflation over showcasing economic growth. A blind pursuit of growth would lead to higher demand and translate almost inevitably into more inflation.

As for the micro level of managing a household, it may be just prudent to adapt our spending patterns to the disheartening reality of deep-seated inflation, and perhaps spare a few bucks to help those in distress. Inflation isn’t dead, as yet. But the world needs a healing touch, now perhaps, more than ever.