Food Security, the Russia-Ukraine War, and the Food Corridor Agreement

As long as the Food Corridor Agreement singed in Turkey is respected by Ukraine and Russia, grain will be delivered to countries in need. 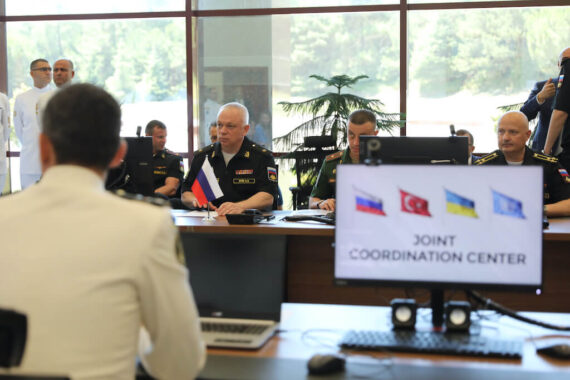 Officials attend an opening ceremony of a new joint coordination center established at the National Defense University as part of a historic deal to restart Ukrainian grain exports to the world officially on July 27, 2022, in Istanbul, Turkiye. Photo by Isa Terli, Anadolu Images

The Russian military invasion of Ukraine has been impacting the world economy since it was first launched on February 23, 2022. Alongside threatening world peace, the global economy is experiencing major difficulties in energy and food supply. Since the start of the war, the international community has been warning against a global food shortage, which had already begun to be felt as an outcome of the COVID19 pandemic.

As the war continues, gloomy prospects gradually prove to be true. David Beasley, executive director of the United Nations World Food Programme, conveyed to Russian President Vladimir Putin that millions would die across the world because of the Russian blockade of Ukraine. President of the World Bank David Malpass similarly warned that the rising food prices would have devastating effects on the poorest and most vulnerable.

Considering that Ukraine and Russia are among the top grain-producing countries, the war is causing actual and potential food shortages by way of hampering the production and export of millions of tons of grain. Ukraine, along with Russia, is one of the largest cereal producers in the world. It supplies a tenth of global wheat exports and about 95% of those exports left the country through Black Sea ports. The current war in Ukraine is leading to food shortage, especially for developing countries, while Europe’s food security is also said to be threatened.

Read: A New Cold War Erupts in the Shadow of Food Crises

Ukrainian farmers frequently complain about Russian assaults on their grain plants and farm equipment. Satellite images show the damage inflicted by Russian forces on three of the terminal’s grain silos, a conveyor, and a storage building, as well as on Ukraine’s second-biggest grain terminal and sunflower oil storage tanks at nearby Mykolaiv. As a result of Russia’s attack, the export capacity of the terminal has been reduced by at least a third.

The conditions of war in Ukraine have also led to ever increasing input coasts, especially energy costs, which eventually have extensive restrictive impact on the food production. The ordinary export of grain is also hampered by the reported expropriation of Ukrainian grain by Russia: Russia is said to have been stealing enormous amounts of Ukrainian grain through the Russian ports in the Azov Sea.

The Russian blockade of Ukrainian ports in the Black Sea is another obstacle. Despite Russia’s occasional denial, it has been openly blockading the few unoccupied Ukrainian ports and especially Odessa. This has hampered ships loaded with grain, sunflower, barley, or oat from transporting them to where they are needed the most.

While the UN Secretary-General António Guterres said that Russia must permit the safe and secure export of grain stored in Ukrainian ports, Russia’s foreign ministry has said Russia would only consider opening up Ukraine’s Black Sea ports—and thus alleviating the pressure on global food supplies—if sanctions against Russia were reviewed. The combination of the sanctions against Russia and the food crisis could have a devastating effect on millions of people in more than 50 countries.

The sea mines placed in offshore maritime areas by both Ukraine and Russia form another obstacle to the resolution of this deadlock. Although Russia has denied laying mines around the Black Sea ports, and refuses the allegations by Kyiv, claiming instead that the Ukrainians have mined their own ports, the Russian navy is reported to have laid mines at the ports of Odessa and Ochakiv, and the Dnieper River.

All civil ships in Ukrainian and Russian ports have not dared to sail into the Black Sea as neither of the warring sides nor other parties could give them a guarantee to free and safe passage out of the Black Sea. The sea mines have, in fact, created conditions which are almost impossible to navigate regardless of the blockade.

Turkey has been mediating insistently for at least four months to broker a deal between Ukraine and Russia in order to create safe corridors in the Black Sea for the export especially of Ukrainian agricultural products. The consistent Turkish efforts, which have involved the UN secretary general, eventually yielded fruit. Representatives of Ukraine and Russia signed a memorandum of understanding (MoU) which was co-signed by the UN secretary general and Turkey.

The deal, which will be valid for four months and could be renewed, creates three safe corridors from Ukrainian and Russian Black Sea ports. A Joint Coordination Center in Istanbul, which consists of the representatives of all parties, will be responsible for coordinating the safe passage of all trade ships coming to/from these ports.

Despite the initial Ukrainian objection to the inclusion of Russia’s agricultural products, the deal covers Russian products as well. Russia was already complaining that sanctions imposed against it by the U.S. and the EU interfere with normal free trade, encompassing, among others, food products, such as wheat, and fertilizers. Eventually a separate MoU was signed between Russia and the UN and Turkey so that Russian shipment of food products and fertilizers can be exported without any problems.

The Food Corridor Agreement is a major achievement for alleviating the growing global food crises by eliminating its most serious obstacle: the lack of safe corridors in the Black Sea. As long as the agreement is respected and applied properly by both Ukraine and Russia, grain will be able to be provided to countries in need.

There are, however, some risks both to the agreement and to the efforts to alleviate the food crisis. There is a risk of Russia attacking the farm plants and infrastructure, and expropriating the products of Ukrainian farmers. Such actions would lead to a fundamental decrease in the Ukrainian production especially for the upcoming season.

Blockading and mining ports during wartime are legitimate methods of warfare. However, there are many conditions that must be fulfilled by the warring parties in order to protect civilians, non-belligerents, and civilian infrastructure.

All methods and means of fighting must be conducted solely for military purposes and military ends without harming civilians. In the time of war, the Hague Convention relative to the laying of automatic submarine contact mines of October 18, 1907 (the Hague Convention No. VIII) provides that “every possible precaution must be taken for the security of peaceful shipping” by belligerents.

In this manner, Ukraine and Russia are bound by international law not to exploit the deals by using the safe corridors for military purposes; usage is exclusively restricted to civilian uses and civil trade purposes. Similarly, Russia is contracted not to attack farm fields and infrastructure within the Ukrainian territory, as well as port facilities—all such actions would ultimately undermine the aim and purpose of the Food Corridor Agreement.