The "Foreign Agent" Law in Russia: A New Cold War on Journalists

According to Dmitriy Migalin, a former political journalist of the Russian federal media outlet which is likely to get the “foreign agent” status, the game rules are not transparent. 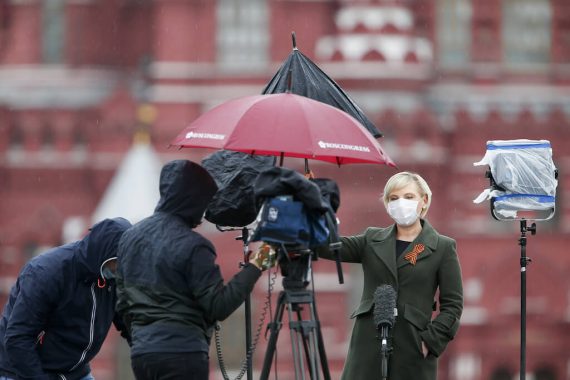 Journalists wearing mask work during a Victory Day military parade marking the 75th anniversary of the victory over Nazi Germany in the 1941-1945 Great Patriotic War, the Eastern Front of World War II at Red Square in Moscow, Russia on May 09, 2020. Photo by Sefa Karacan, Anadolu Images

Russia’s “foreign agent” law has provoked a serious debate in the country and abroad – and for good reason. As it is amended on a regular basis, there are new interpretations of the “foreign agent” definition and new categories of legal entities and persons that could become potential targets of the legislation from mass media outlets to ordinary Russian citizens.

A recent update of the “foreign agents” list published by the Russian Ministry of Justice on October 8, 2021, has added twelve more legal entities and citizens bringing the total number of personae non gratae to 85. But are things on the ground as bad as they are on paper? As a former journalist of Russian state-controlled media, Russia Today, and a current independent political and economic observer, I’ve looked at both sides of the coin and tried to provide an objective overview of this controversial law.

It all started in 2017 when the U.S. branch of RT (former Russia Today) media outlet was forced to register as a foreign agent under FARA law. RT’s editor-in-chief Margarita Simonyan said this decision was the only choice to keep RT operating. “Our lawyers say that if we don’t register as a foreign agent, the director of our company in America could be arrested, and the accounts of the company could be seized. In short, in this situation the company would not be able to work. Between those consequences and registering as a foreign agent, we are forced to choose registration,” she said.

Shortly after the U.S. requirement, Russian President Vladimir Putin asked the State Duma to prepare a “mirror response.” The result was the law which was supposed to enable the Russian Ministry of Justice to force some (at first only) foreign media outlets to enter the register and mark their materials with a specific note. The adopted bill had nothing to do with Russian media outlets at all and was a response to the U.S. pressure on RT.

However, one year after another, the bill was amended. While its main target – the foreign media outlets – had to register as legal entities in Russia to be able to report to the Russian Ministry of Justice, the law now also applies to individual journalists and bloggers who receive funding from “foreign agent” organizations or third parties affiliated with them.

The amendments raised a serious debate across media circles while international organizations like Amnesty International and the OSCE claimed the law was a violation of fundamental human rights. The latest version of the law also applies to Russian media outlets and journalists that are suspected of receiving funds from “foreign agents” or parties affiliated with them — a move that has provoked outrage among Russian media outlets, mainly among those supporting the opposition.

For the sake of fairness, it’s worth comparing the implications of the “foreign agent” law in the United States. One may be surprised, but in fact, the U.S. “foreign agent” legislation is way broader and requires a lot more serious reporting in comparison with the Russian one. For instance, in the U.S., “foreign agents” are not only required to register, but also to provide the U.S. Department of Justice with a significant amount of information on a regular basis.

In addition, all material must be marked as being distributed by an agent in the interests of a foreign principal. Evasion of registration or failure to report to the authorities entails serious liability including imprisonment for up to five years and deportation from the country.

At the same time, the U.S. law gives a very broad and blurry definition of “political activity,” which it defines as “any activity that the person engaging in believes will, or that the person intends to, in any way influence any agency or official of the Government of the United States or any section of the public within the United States with reference to formulating, adopting, or changing the domestic or foreign policies of the United States or with reference to the political or public interests, policies, or relations of a government of a foreign country or a foreign political party.”

In other words, the regulation measures apply in particular to persons who are engaged in lobbying, distribution of finances and information, and advisory activities. A person whose main place of business is another state can also be recognized as a foreign principal, even if they are not associated with a foreign government.

Yet, the Russian “foreign agent” law is also far from being perfect and requires revisions. Being amended in order to control the activity of foreign media outlets based in Russia and to suppress any foreign interventions in the national political elections system, its targets could be ordinary citizens who intentionally or unintentionally post provocative content on social media or support “foreign agent” organizations or people, or take part in activities where “foreign agents” are noticed.

The biggest concern of the Russian “foreign agent” law is, of course, expressed by journalists and media outlets. Once labeled a “foreign agent,” the company is limited in its commercial and advertisement activities, which are often the main source of income for most media outlets in Russia.

According to Dmitriy Migalin, a former political journalist of the Russian federal media outlet which is likely to get the “foreign agent” status, the game rules are not transparent.

“Everyone is aware that any media platform could get this unwanted status. On the one hand, it is banding together all journalists and media community like never before, even competitors: today it is them, tomorrow it will be us, we are all on the same boat after all. But on the other hand, the reaction of key investors of a media outlet is highly unpredictable nowadays. Everyone is afraid of shams and unexpected foreign cash inflows to an outlet’s account. As ironic as it may seem, all responsibility is on accounting departments: one ‘accidental’ thousand-dollar inflow not returned in time may get an entity a ‘foreign agent’ status,” adds Migalin.