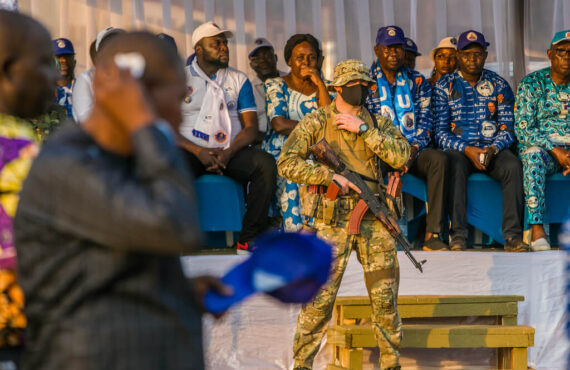 In parallel with the intensification of the global power competition, Russia is making efforts to expand its sphere of influence by taking new initiatives, especially in Africa. This is occurring in a twofold framework in which Russia is becoming more advantageous in its competition with the U.S. and at the same time, its presence is being strengthened in regions where China is increasing its weight. Thus, Russia is turning to countries in Africa with which it had close ties during the Soviet period, especially in North Africa and the Horn of Africa, and has already signed economic and military agreements with Egypt, Algeria, Mauritania, Ethiopia, Mozambique, and the Central African Republic.

Russia’s aggressive engagement with Africa has become visible in the fields of foreign policy, economy, and culture. For instance, the trade volume between Russia and Africa doubled from 2013 to 2018, exceeding $20 billion. Such data indicate that not only is Russia interested in the region, but African countries are also open to trade with Russia. The acknowledgement of the Russian presence in Africa manifests itself in a total of 92 agreements and memoranda of understanding signed at the Russia-Africa Summit and Economic Forum held in Sochi in October 2019.

There are four main motivations behind Russia’s orientation toward Africa: (1) increasing its sphere of influence diplomatically, (2) improving its economy with access to new markets, (3) expanding its militarily outreach, and (4) strengthening its position in the African continent vis-à-vis the U.S. and China.

In recent years, military cooperation has come to the fore in Russia’s Africa strategy. Given the presence of the U.S. and China, Moscow seeks to be more active militarily in Africa. Since 2015, Russia has engaged in military cooperation with more than 20 African countries through arms sales, access to ports and air bases, training military personnel, counterterrorism, and peacekeeping. Russian military advisers have been present during several conflicts and have signed a series of agreements. Today, Russia ranks first in total arms exports to Africa and Rosoboronexport, Russia’s state arms dealer, manages these sales.

Even though Russia’s Africa foreign policy covers the whole continent, Moscow’s activities in recent years have concentrated mostly on North Africa and the Horn of Africa.

Russia is also taking steps to establish its permanent military presence in Africa and has signed agreements with Egypt and Libya, while it now has a naval base near Port Sudan. Moscow is showing effort to establish military bases in the Central African Republic, Madagascar, and Mozambique, and announced that it will establish a logistics hub in Eritrea. With the purpose of standing out in competition with global actors, new military bases are to facilitate the increase of Russian military personnel in Africa, which is currently around 7,000.

Even though Russia’s Africa foreign policy covers the whole continent, Moscow’s activities in recent years have concentrated mostly on North Africa and the Horn of Africa. As a matter of fact, three-quarters of Russia’s $20 billion trade is carried out with North African countries. Similarly, Russia has recently entered into strategic cooperation with the Horn of Africa countries and signed political, economic, and military agreements with Egypt, Libya, Ethiopia, Sudan, and Mauritania.

A closer look at these agreements reveals the nature and content of increasing cooperation. As part of military sales to African countries, Egypt, the Central African Republic, Nigeria, Mali, Kenya, Uganda, Angola, and South Africa have purchased Russian warplanes (Su-30K, Su-30MK2, TU-160) and helicopters (Mi-17V-5, Mi-35M, Mi-171Sh). In addition to direct sales of military equipment, most agreements in the field of defense include the training of military personnel, which helps the African partners increase their capacities.

Egypt is perhaps the most important country in North Africa for Russia. Relations between Moscow and Cairo have made significant progress since Abdel Fattah al-Sisi, who came to power following a military coup in 2013, has been at the helm of Egypt. Both Moscow and Cairo share similar views on regional political issues – the most outstanding being their support of the Assad regime in Syria and Khalifa Haftar in Libya. In 2014, Egypt and Russia announced that they would also cooperate in the field of nuclear energy, and a year later, an agreement was signed allowing Russia to build a nuclear power plant in the Mediterranean city of El Dabaa.

Again, seeking financial support in the post-coup period, Sisi approved Russia’s establishment of a free-trade zone in the Suez Canal. Since 2013, a significant volume of arms and military equipment trade has taken place between the two countries. This has also put Egypt’s relations with its traditional ally, the United States, at risk. On February 25, 2020, after Russia officially announced that Egypt had purchased five Sukhoi Su-35 fighter jets, the Washington administration announced that it refused to sell the fifth-generation F-35s to Cairo and would impose sanctions on the country. 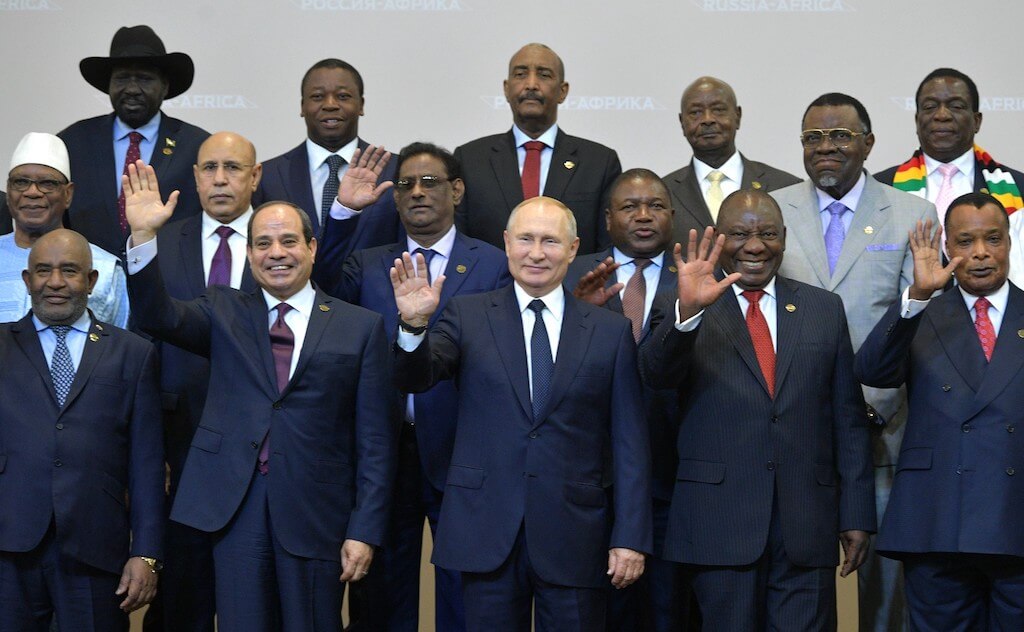 Libya hosts Russia’s most visible recent military presence in Africa. Russia’s private military company Wagner, which supports Khalifa Haftar’s forces, plays a critical role in the civil war in Libya. In the reports by AFRICOM and the U.S. Department of Defense, the Wagner group acts under the guidance of the Russian Ministry of Defense. Yevgeny Prigozhin, known for his close ties to Vladimir Putin, is the head of Wagner, and is alleged to be conducting covert operations on behalf of the Russian government in Libya.

Although they work with Haftar’s forces, Russian mercenaries have become a serious asset in the country at this point and they play critical roles, especially in the eastern and southern regions of Libya. Aiming to establish a permanent military base in Libya following Syria, Russia poses a serious threat to European Union countries and the U.S. in the southern flank of NATO.

Haftar’s forces have also been present in the Central African Republic, Madagascar, and Mozambique. This situation is watched with concern not only by the U.S. and European Union countries, but also by Beijing. Russia’s growing influence in the region means the inclusion of another global actor in an already populated region. For this reason, Russia’s expansion in Africa poses a security problem for both African countries and their regional allies.

Sudan is another African country with which Russia has recently increased its cooperation. Sudan is important for Russia in so far as it has a coastline on the Red Sea, one of the most important trade routes in the world and one which connects the Mediterranean to Asia. Russia anticipates strengthening its relations with Sudan and signed an agreement for a military base in the Red Sea in 2017 with the ousted President Omar al-Bashir and later during the transitional administration period.

Sudan also draws attention as one of the largest arms markets for Russia. The close relation of Sudan with the U.S., established during the transitional administration, currently prevents Russia from collaborating with the military actors. As a matter of fact, recent statements from Khartoum, announcing its intent to “review” the military base agreement with Russia, have caused worry in Moscow.

Recently, Ethiopia has become another African country that has entered into close engagement with Russia. Cooperation agreements were signed with Ethiopia on issues such as arms sales, the use of air bases, training and consultancy services to Ethiopian officers in Russian military academies, and military support services in counterterrorism and peacekeeping operations.

With the Renaissance Dam crisis, in which Egypt, Sudan, and Ethiopia are the main actors, the relations between Russia and Ethiopia have been moved to a different ground. Russia’s implicit support for Ethiopia vis-à-vis the dam’s construction, while disturbing Egypt on the one hand, caused Ethiopia to define Russia as a reliable ally on the other. These developments are considered the main factor that caused Addis Ababa to move closer to Moscow.

Although Russia-Mauritania relations have not displayed very positive signals, largely due to Russia’s support of the Algeria-backed Polisario Front in the Western Sahara crisis, the military cooperation agreement signed between the two countries in June 2021 has portrayed Mauritania as strategically important within the scope of Russia’s African expansion. At the ceremony held on June 23, 2021 with the participation of Russian Deputy Defense Minister Alexander Fomin and Minister of Defense Hanena Ould Sidi, the two countries signed and emphasized the importance of the agreement for the development of their bilateral relations.

Thus, an effective military presence of Russia has emerged in Mauritania, one of the countries in the Sahel region, which is under the influence of France. The fact that the agreement arrived shortly after France announced that it had terminated Operation Barkhane points to the direction that Russia intends to fill the gap left by France in the region.

There are also obstacles for Russia and its aggressive strategy in Africa. Issues such as the colonial actors’ fear of losing influence, the rise of new powers such as China, the instability of countries in the region, terror attacks, security problems, the increasing competition in access to natural resources, the struggle for influence by global actors, and food security and water shortages that affect the strategies of global actors, including Russia.

These factors will decide how successful Russia’s strategy in returning to Africa will be. Considering that Russia is active in many regions, the sustainability of its foreign policy in terms of economic and military capacity is also doubtful. In spite of this, Moscow is determined to pursue its aggressive foreign policy strategy and will continue its engagements in order not to fall behind in global competition.