Russia's successful “comeback” in the Middle East started with the Syrian Civil War, through selling weapons and expanding its influence. 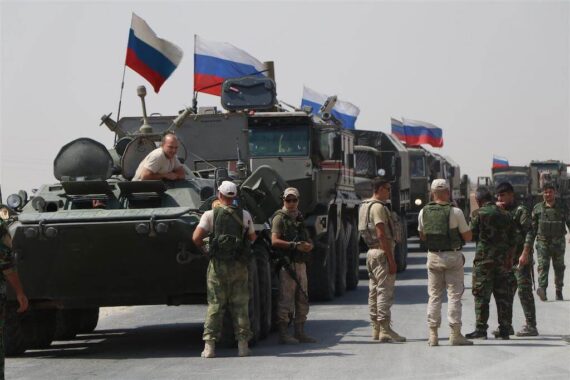 Russian military vehicles drive on the road as Russia makes a new military and logistic reinforcement of 30 vehicles to its military points in Kamisli, which is occupied by PKK terrorist organization on September 14, 2020. Photo by Samer Uveyd, Anadolu Images

The Kremlin’s successful “comeback” in the Middle East is explained by the fact that Moscow has become accustomed to appearing on the political scene only during crises, when conventional players seek a quick but often emotional resolution. Another obvious reason is the logic of the Russian authorities which have traditionally exploited different upheavals to gain greater political leverage inside the country.

In general, the Syrian war has enabled the Kremlin to make a quiet “comeback” in the Middle East. From the outset, Moscow managed to raise its contacts with key regional and extra-regional stakeholders to an unprecedented level, thus achieving a dialogue on an equal footing that had been sought by the Kremlin since the annexation of Crimea in 2014. Yet, many observers wonder whether Russia will be able to use these gains efficiently in the long term. This crucial question is still open-ended as the answer depends on the capabilities and consistent steps of the power vertical.

No arms sale windfall following the weapons tests in Syria

Experts in Moscow enjoy discussing how the war in Syria became a promotion campaign for Russia’s weaponry. The real-world evidence for this hypothesis, however, is somewhat scant. Despite Moscow testing a wide spectrum of weaponry and military hardware in Syria, this has not translated into an uptick of its military exports to the Middle East and Northern Africa, a region which occupies a special place for Russia to expand its military-technical cooperation with countries around the globe.

Taking into account that arms negotiations usually take two years to conclude, it was rather amusing to read various hot takes on the upsurge in Russia’s weapons sales only six months after the start of Moscow’s intervention in Syria.

In 2015-2020, Egypt, Algeria, and Iraq were the main importers of Russia’s weapons. All three countries began striking their bundle agreements (or negotiating over particular classes of weapons) with Russia before its intervention in the Syrian civil war.

The values of contracts might be subject to manipulation, so looking at the actual physical volume of deliveries could give us a more accurate picture. In 2015-2020, Egypt, Algeria, and Iraq were the main importers of Russia’s weapons. All three countries began striking their bundle agreements (or negotiating over particular classes of weapons) with Russia before its intervention in the Syrian civil war.

The exception to this rule includes some of the agreements between Russia and Saudi Arabia, Qatar, and the UAE. Those deals became media highlights due to the specifics of those countries’ relations with the U.S. But neither the sums of the contracts nor their assortment points at any sort of arms sale windfall.

With the Qatar blockade lifted, the hype around Middle Eastern countries racing to purchase Russian-made S-400 is subsiding. The interest in the Russian systems was fuelled by the Saudi-Qatari conflict and, more pertinently, by the S-400 radar’s ability to enable Doha to look deep into the neighboring Saudi territory. Another factor constraining sales of Russia’s weaponry is the U.S. sanction provisions contained in the Countering America’s Adversaries Through Sanctions Act (CAATSA) that was signed by Donald Trump in 2017.

The restrictions threw a wrench into Russia’s negotiations with Kuwait on the purchase of the T-90MS/MSK, which the Gulf country had already tested in 2014. As a result, Turkey’s purchase of Russian S-400 systems stands as Moscow’s only real breakthrough deal in the region since the start of the Syrian war.

Russia’s policy towards the Middle East has a special characteristic which pro-Kremlin pundits like emphasizing. Moscow can simultaneously and to a large extent officially engage in talks with opposing parties, say, Israel and Iran, the U.S. and Hezbollah, Turkey and the PYD. Its neutral status that relies on multipolarity as a fairer way of dealing with other partners has helped Russia mount a “comeback” on the global stage and establish itself as an actor whose participation, as Putin stated back in 2003, was indispensable to tackling any global or regional problem.

However, it would be a misconception to interpret such steps as Moscow’s desire to become a mediator or that it is interested in building a balanced architecture of regional security – it just seeks to present itself as a mentor.

Strategically speaking, Russia has pursued a “clinger” policy in recent years. Moscow has been trying importunately to interact with everyone in order to impose a “dialogue on an equal footing” on Washington, its principal rival.

The Kremlin seeks to bolster its position by playing the contradictions card and making the most of the lack of concordance among traditional allies; by gaining a firmer foothold in the countries at the apex of the crisis – Syria, Lebanon, Iraq; or by mediating the overdue policy to diversify political ties.

Such tactics tend to be typical of non-state actors which do not have the means to secure themselves. The Kremlin has them in plentiful supply, both nuclear and non-nuclear ones. However, insufficient economic resources prevent Russians from winning unswerving loyalty – even that of their strategic allies, not to mention tactical ones.

In the official propaganda, the emphasis is on exceptional strength which is devoid of significant economic power and which stems from the Soviet paradigm. The latter has defined the agenda promoted by the Kremlin and reinforced the familiar bugaboo of the external enemy against the image of upright state leadership.

Therefore, Putin, a politician who became a historic figure with the annexation of Crimea, could not simply put up with the sanctions imposed after 2014 or see Russia being compared to a besieged fortress. Although the image of the external enemy is indispensable to Russian officials’ speeches, it contradicts, first of all, the existing Western centrism of the Russian elite.

Moreover, pretending to see a threat and moralizing are not tantamount to rule-setting on the world stage. After the Russian “comeback” in the Middle East, where it had to deal with numerous non-state and quasi-state actors, Moscow was forced to resort to parallel diplomacy given the inability of official departments to solve the foreign policy tasks assigned to them in an effective manner.

Hence, we have seen the involvement of the Chechen think tank (Kadyrov’s Muslim team) in the negotiations, the deployment of Prigozhin’s mercenaries to fulfill military tasks, and the engagement of military intelligence to get rid of undesirables. Naturally, special forces should coordinate such activities rather than the Foreign Ministry.

Formally, the Russian Foreign Affairs and Defense Ministries work very close and in tandem. Nevertheless, it has been clear since 2017 that security officials, and military and intelligence agencies, sidelined diplomats in the Syrian and later in the Libyan cases. Still, the key players were only too glad to let Moscow call the shots in Syria as Russia would have to shoulder the burden of the crisis settlement and the responsibility for the survival of Assad’s ossified regime.

At the same time, the Russian authorities cannot afford to concentrate exclusively on internal efforts and to ignore Syria. It is the country’s fruitful foreign policy and its advances in rocket and missile building which allow Moscow to divert attention and raise the self-esteem of people and bureaucrats bitterly and openly missing the former greatness of the Soviet Union.

In light of the absent power alteration, the Kremlin will not be accountable for its decisions in a new electoral cycle. Therefore, it can delegate the duty to fight abroad to mercenary structures and the right to do business to companies lacking transparency when it comes to profit-gaining, that commit tax evasion, etc. This is what the notorious “consistent” Middle East policy comprises. Reactionary decisions are underpinned by other reactionary decisions and generate a mere semblance of a political strategy, which is, in essence, highly personality-oriented. 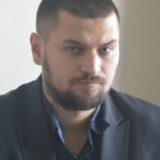 Anton Mardasov is a non-resident expert at the Russian International Affairs Council (RIAC) and a non-resident scholar at the Middle East Institute’s Syria Program, where he writes about Syria. He is the author of numerous articles in Russian media, and several studies and book chapters on the Russian strategy in Syria, the Syrian opposition, and Moscow’s relations with Iran, Lebanon, and Egypt.