A recently published report on Twitter trends expose that at least 47% of local trends in Turkey and 20% of global trends are fake. 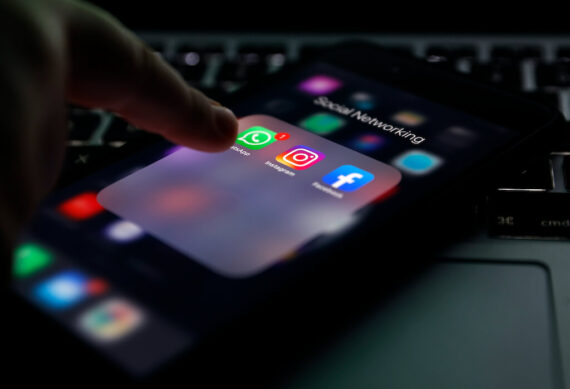 In this photo illustration, screens display the logos of Whatsapp, Instagram and Facebook. Photo by Anadolu Images

Digital media is a double-edged sword and many governments around the world now fear that social media may jeopardize their national security. The quick spread of misinformation in social media poses a grave challenge. Disinformation and manipulation operations are rapidly taking over the world and Turkey is no exception.

Let’s go back to early August 2021, last month, when Turkey was fighting wildfires that spread along its Mediterranean coastline. The hashtag #HelpTurkey started trending on Twitter, reaching 2.7 million tweets calling for international help to fight the fires. Although there were real users who used the hashtag with good intentions, the timing, density, and contents raised doubt and questions. Marc Owen Jones, an expert on the subject, considered these hashtags as part of an “influence operation” to pressure the Turkish government by putting it in a difficult situation before the public and the international arena.

The Turkish government believes that the #HelpTurkey campaign was staged abroad  and the ideological motivation behind it was to present Turkey as helpless and incapable President Recep Tayyip Erdoğan condemned the accounts spreading the hashtag. In the same vein, Fahrettin Altun, the Turkish Presidency’s communications director, argued that the campaign’s purpose was not to create a global solidarity behind Turkey but to make the country look incompetent – all this despite the fact that the Turkish government had accepted foreign aid to control the forest fires.

In response to the fake campaigns, the Ankara Public Prosecutor’s Office accused certain groups of seeking to cause fear and panic among the public through fake accounts on Twitter. The government is making plans to take action against those responsible for spreading fake news with a further intention to regulate social media at large. In July 2021, Erdoğan stated that the Turkish government is working on a new law regarding disinformation on social media.

Marc Owen Jones, an assistant professor at Qatar’s Hamad Bin Khalifa University and an expert on disinformation and social media, explained that the #HelpTurkey hashtag was manipulated by fake accounts. While the #HelpTurkey and #globalcall hashtags have been spread by real people and celebrities, Jones claims that the source of these hashtags was fake accounts and bots. In other words, they were part of a manipulation campaign.

Jones suggested a possible influence operation, even though many people with good intentions also participated in it. Influence campaigns take the form of dissemination of propaganda in pursuit of a competitive advantage over an opponent. For Jones, the messaging and multiple infographics also suggested some form of a campaign.

Jones analyzed 160,000 interactions from 46,000 accounts worldwide for the #HelpTurkey hashtag. He pointed out that fake and bot accounts were responsible for most of the traffic. Jones gave many examples of such accounts to support his claim. One of the fake accounts was @ege20281770. It was created on August 2, 2021, a few hours after the fires broke out. Yet, the account’s tweets were deleted after the hashtag reached a certain number of tweets. Meanwhile many other accounts changed their username and deleted all posts after publishing their tweets. Jones emphasized that 70 of the 7,400 accounts that tweeted the most using the hashtag have been renamed or closed.

Moreover, fake accounts use a tactic called “handle switching,” where users change their Twitter handle after engaging in a campaign to promote a trend. After that, the account operators erase their content.

The political tensions between the ruling party in Turkey, the AKP, and the opposition contribute in one way or another to the emergence of these misleading campaigns. Whenever Turkey witnesses a political event, hashtags appear suddenly to condemn the government and tarnish its image.

For example, in the wake of the murder of a Turkish citizen in Ankara by a young Syrian, many social media users in Turkey attacked refugee rights in the country with the hashtag “we don’t want refugees,” knowing that the ruling party opened the border to Syrian refugees fleeing the civil war. Similar campaigns occurred targeting Afghan refugees who arrived in Turkey crossing the border with Iran following the U.S. withdrawal from Afghanistan.

A few months ago, a study conducted by researchers in Switzerland on Twitter trends, exposed  that at least 47% of local trends in Turkey and 20% of global trends are fake. According to the research, trends between 2015 and 2019 were created by bots due to a vulnerability in Twitter’s algorithm that could be exploited to achieve political gains via promoting specific content. This research, the first to uncover the manipulation of Twitter trends on this scale, discovered that 108,000 bot accounts were involved in such operations.

According to the study, the main fake trends included topics of illicit ads, politics, and people seeking political change. A manipulated hashtags exposed by the research was #SuriyelilerDefolsun (Syrians Out). This fabricated hashtag was picked up by many news reports, other social media platforms, and academic papers as Tuğrulcan Elmas, the co-author of the study, claims.

If it’s true that lies travel faster than the truth, then social media platforms provide a fertile ground for lies to spread. To amend this requires major technology companies, such as Facebook, Twitter, and others, to regulate communication through digital platforms without harming human rights, freedom of expression, and access to communication.

Linda Shalash is an Istanbul-based journalist and a PhD candidate at the Middle East Institute at Sakarya University, Turkey. Previously, she worked as a TV correspondent in the West Bank. Her PhD research covers digital diplomacy using social media outlets and its impact.