The question is how could a person like Naftali Bennett with allegations of war crimes against him become the prime minister of Israel? 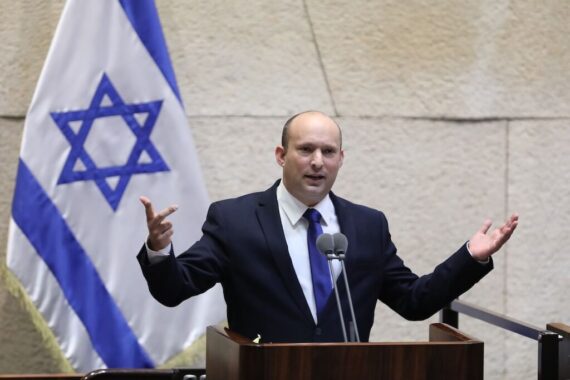 Naftali Bennett is an Israeli ultranationalist politician, born on March 25, 1972, in Haifa to a Jewish family migrated from the United States. He attended the Yavne Yeshiva High School in Haifa, becoming a youth leader with the religious Zionist youth organization Bnei Akiva. Bennet and his family are followers of Orthodox Judaism.

Bennett graduated from the Hebrew University in Jerusalem with a degree in law. He served in the Sayeret Matkal Unit, the elite unit of the Israeli army, which is in charge of carrying out critical operations. Much later in 2018, this unit would come under the spotlight when Hamas commanders in the Gaza Strip uncovered two of its vans, which hid intelligence equipment and a dozen Israeli special forces, resulting in the killing of one of the Israeli commanders.

Naftali Bennett served as a commander in Lebanon and the West Bank. In 1996, his force came under mortar fire in Lebanon. Following the shelling of the area by the Israeli army to cover his force, the shells hit the UN compound in the village, killing 102 Lebanese civilians.

Bennett owes his wealth to two information and data protection companies, which he co-owned. Cyota was sold for $145 million and Soluto, where he served as CEO, was sold for $100 million.

VIDEO: Israeli minister: The Bible says West Bank is ours

Bennett began his political life in 2005 when he was appointed the head of Benjamin Netanyahu’s team, then leader of the Israeli opposition. He led Netanyahu’s Likud party in the primary elections, which he won, paving the way for Netanyahu to become Israel’s prime minister in 2009.

In 2013, Bennet came under fire for saying, “I have killed lots of Arabs in my life – and there is no problem with that.”

In the same year, Bennet was appointed the director general of the Yesha Council, the main settler advocacy group in the West Bank. He advocated for annexing Area C of the West Bank, which comprises nearly 60% of the territory. Throughout his political life, Bennett has served as the head of a number of political parties, including the Jewish Home (2013-2018), the New Right (2018-2019), Yamina (2019), New Right (2019-2020), and again Yamina (2020-present).

In 2013, Bennet came under fire for saying, “I have killed lots of Arabs in my life – and there is no problem with that.”

Read: The Illusion of a Palestinian Kingmaker in Israel

Bennet told the Israeli television channel Keshet 12 (Channel 12) that a war in Gaza would lead his coalition to collapse because the United Arab List, which is part of the coalition, would not support it.

He believes that the relationship with the United States is strategic to Israel, but he has also noted that Israel’s security comes first, and that Israel should not care about what the world has to say about it vis-à-vis Iran.

Bennett describes himself as “more right-wing than Mr. Netanyahu.”

Bennett has described himself as “more right-wing than Mr. Netanyahu.” He is also an advocate of keeping Israel a Jewish state and controlling the Syrian Golan Heights.

“As long as I have any power and control, I won’t hand over one centimeter of land of the Land of Israel,” he said in an interview in February 2021.“There are some things that we all know will never happen … The Sopranos will never return for another season … And a peace agreement with the Palestinians will not happen,” he continued.

Bennett’s vision for the Palestinians is made of a number of points. First, the annexation of most of the occupied West Bank, which will allow Jewish settlers to remain there and give Israel control over water resources.

He is in favor of squeezing most West Bank Palestinians into urban enclaves with limited control over their lives. A few tens of thousands of Palestinians would be granted Israeli citizenship, to “counter any claims of apartheid,” his vision reads.

In 2013, Bennett stated that Palestinian “terrorists should be killed, not released,” and in 2018, Bennett thought Israeli forces at the Gaza fence should have a “shoot to kill” policy, which also includes minors.

For Palestinians, it does not matter if Israel’s prime minister is Benjamin Netanyahu or Naftali Bennett as their policies are ostensibly the same. Bennett has been inspired ideologically by Netanyahu’s approach of annexation and he has served as a minister under Netanyahu five times.

The question is how has a person like Bennett with allegations of war crimes against him when he was serving in the West Bank and Lebanon become the prime minister of Israel? It seems that the majority of the Israeli settler-society today has turned toward the right and right-wing politics in Israel is becoming the norm. Hence, Israel’s new prime minister has publicly declared that he has killed a lot of Arabs in his life and this does not appear to be a problem.

At the same time, Bennett feels comfortable to say that Israel’s security comes first when it comes to his country’s relationship with the United States. This is because he knows that regardless of what happens and regardless of Israel’s policies towards the Palestinians – which recently were described as apartheid in a Human Rights Watch report – the U.S. will continue to give Israel $3.8 billion in military aid a year.

It appears that Palestinians will continue to pay the price for occupation – an occupation that Naftali Bennett does not recognize under any circumstances.