Ghost of Arab revolutions will continue to haunt the oppressive regimes in the Arab world, despite their counter-revolutionary attempts. 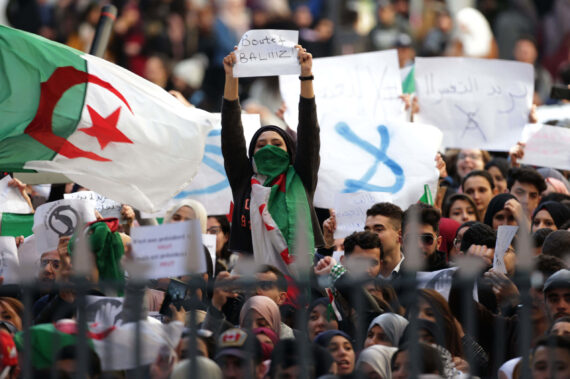 Algerian students gather to protest against the fifth term of Abdelaziz Bouteflika at the University of Algiers in Algiers, Algeria, on February 26, 2019. 81-year-old Abdelaziz Bouteflika, serving as the president since 1999, has announced on 19 February he will be running for a fifth term in presidential elections scheduled for 18 April 2019. Anadolu Agency

Algeria has been witnessing anti-government protests for over a week. President Abdel Aziz Bouteflika, who has been serving as president since 1999, is at the center of the criticism of the protesters. The demonstrations started after the announcement that 82-year-old Bouteflika will be a candidate for the upcoming presidential election on 18 April. Since this announcement, various social groups and civil society movements have participated in nation-wide protests in almost all major cities across the country. The group driving the protests are students. In almost all major universities, students have organized mass protests. The mobility capacity of the youth has been essential in the rapid organization of demonstrations and the high levels of participation.

The most striking feature of the protests is that they are the first kind of demonstrations that have been organized in the country since the civil war ended in 2002. The war claimed lives of over 100,000 civilians in the country since the beginning of the conflict in 1992. The psychological effects of the civil war prevented many Algerians to shy away from political discussions, let alone organize popular protests. However, it seems that Algerians have no patience left against their regime. There are several particular reasons as to why this protest movement has been taking place recently.

It is absurd for a country where the median age is 28 to be ruled by someone who is 82 and cannot function as a statesman due to his severe health conditions. So, the Algerian youth said “enough” to the continuation of Bouteflika’s term.

First of all, Bouteflika’s candidacy for a fifth term in office was perceived as a humiliation for Algerian people. Bouteflika has not been able to walk or talk after he experienced a stroke in 2013. Following that year, his health condition has deteriorated gradually and he was seen in public only on a couple of instances. It is argued that under such conditions, he cannot serve or represent the country, of which the majority of the population is under 30 years old. It is obviously absurd for a country where the median age is 28 to be ruled by someone who is 82 and cannot function as a statesman as we know it due to his health conditions. Therefore, the Algerian youth have basically said “enough” to the continuation of Bouteflika’s term.

The second important reason behind the demonstrations is that the political elites, who have ruled the country since the civil war lost their legitimacy in the eyes of Algerians. Corruption, management, nepotism, socio-economic problems, lack of civil rights, and political pressure on the opposition has caused a widespread reaction against the regime. The dissatisfaction has further been triggered by the announcement of Bouteflika’s candidacy, which led all segments of society to join the protest movement.

Finally, the majority of the Algerian youth have been increasingly engaging with social media tools that have allowed them to see developments in a regional and international sphere. Moreover, the effects of globalization have been visible on Algerian society, as the country’s new generation is actively engaged in global developments. The Algerian people have also been following the regional political atmosphere and have been witnessing demands for change in other Arab countries. These developments in other Middle Eastern countries have also affected the Algerian youth and allowed them to raise their voices for democratic demands.

Apart from this, especially young Algerians with fellow citizens in diaspora who live in European countries like France, exchange views on how their country should be governed. In addition to this, they are also witnessing how Muslim countries can be democratic and developed at the same time as they increasingly observe the experiences of Turkey and Malaysia.

Such reasons and dynamics have motivated Algerian youth to participate in demonstrations. Despite the protests that were initially against Bouteflika’s candidacy, they have now turned into mass gatherings of Algerians demanding democratic rights, and changes in the economic and social structure of the country.

Arab nations prefer to ensure the cost of a revolution, rather than living under oppressive regimes that have been in power for decades. Algeria is not an exception.

The ongoing protest movement in Algeria is a clear reminder of the Arab revolutions period that began in Tunisia in 2010. Millions of people in Tunisia, Egypt, Libya, Yemen, and Syria, poured into the streets with both democratic and economic demands by asking for the removal of their decades-long oppressive regimes. While this process was successful in some countries and resulted in the overthrow of existing regimes, it did not turn out that way for others, where revolutionary uprisings caused long-lasting civil wars and political instability.

One of the characteristics of the demonstrations in Algeria that are similar to the protests of the Arab revolutions is that young people, who are the main actors of the demonstrations, intensively use social media. In the country where internet and phone access is strictly controlled, social media tools such as Facebook, Instagram, and YouTube, are important instruments for protestors to communicate, organize, exchange ideas, interact, and encourage their audience.

The most important message given by the protests in Algeria is that the revolutionary wave that started in 2010 in the Arab region is still continuing despite the counter-revolutionary attempt in Egypt and the instability in Syria, Libya, and Yemen. It can be argued that the Arab nations prefer to ensure the cost of a revolution, rather than living under oppressive regimes that have been in power for decades. Algeria is not an exception. The unprecedented wave of protests in the country is an obvious sign of this. Therefore, the ghost of Arab revolutions will continue to haunt the oppressive regimes in the Arab world, despite their counter-revolutionary attempts.