Yes, Tunisia is at a crossroads now. Autocracy is not the solution to the difficulties facing the consolidation of democracy in Tunisia. 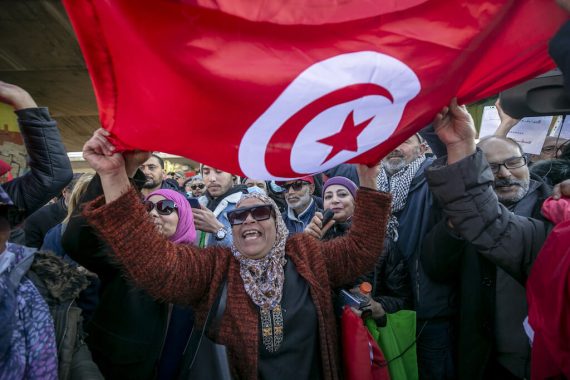 Tunisia is in a cascading political crisis which continues to to deteriorate rapidly. The latest sign of this is the huge security operation that was deployed against the January 14 demonstration in the center of the capital, Tunis, and which prevented the demonstrators from entering Avenue Habib Bourguiba, or “Revolution Street” as it is called by the regime opponents.

The Tunisian political scene seems open to various scenarios. Where before the coup, previous governments had failed abysmally to deliver on the aspirations of the Tunisian people, especially the youth and the poor, it has become abundantly clear since Saied’s coup that his administration and government advisers have only managed to exacerbate and worsen the rapidly deteriorating economic and social conditions across the country – in addition to overthrowing the democratic process.

In the past few weeks, Saied shocked the public opinion by engineering a four-year prison sentence against former president Moncef Marzouki for allegedly lobbying against Tunisia and the Francophone summit that was scheduled to be held in Djerba last year.

Ironically, and to the bewilderment of public opinion, Saied denied he had played any role in the sentencing of Marzouki, despite ordering the justice minister in front of live cameras on live television on October 30, 2021 to open a judicial investigation into Marzouki on the charge of high treason, adding that Marzouki “had joined the ranks of the enemies of the state.”

Then came the spectacularly public scandal of the kidnapping of the former minister of justice and vice-president of the Ennahda Movement, the largest party in parliament, Noureddine Bhiri. Having failed to persuade the judiciary to issue an arrest warrant for Bhiri on the charge of violating the laws of the land, Kais Saied decided to resort to illegal methods reminiscent of the behavior of armed militias in failed states.

Large sections of ordinary, apolitical citizens in Tunisia have not been especially bothered or concerned with the human rights violations perpetrated by the Saied regime.

Bhiri was violently kidnapped a few yards from his home and transferred to a secret detention center. The move drew widespread political anger and condemnation, not only in the ranks of the Ennahda party, but also from across the political spectrum, from human rights activists and international organizations.

It should be stressed however that large sections of ordinary, apolitical citizens in Tunisia have not been especially bothered or concerned with the human rights violations perpetrated by the Saied regime. The primary reason for this is the overwhelming preoccupation with the dire economic conditions that continue to deteriorate.

Yet even on this front, Saied’s coup has failed miserably on its promise to improve the living conditions of ordinary citizens. Many basic commodities are now completely missing in the local markets. The prices of other essential commodities have soared. The inflation rate is rising. In addition, the budget for 2022 approved by Saied’s team without any input from the political parties or trade unions, does not include measures that might alleviate the impact of the struggling economy and rampant unemployment on the exhausted Tunisian citizens. Instead, it will lead to more suffering for the poor and middle classes.

Although Algeria’s president visited Saied and approved a loan of $300 million, this does not mean that Algiers will support the coup unconditionally, or that it will agree to all of Saied’s policies.

On the international front, the early optimism from coup supporters that the anti-democratic regimes of Saudi Arabia and the United Arab Emirates would spend generously on the coup in order to “buy” popular approval and support has dissipated. Unconfirmed reports suggest that Saudi Arabia may support the 2022 budget with one billion dollars. But even if this is true, it is a small amount that pales in comparison to Riyadh’s support for other states, and does little to alleviate any of the coup’s economic challenges.

At the same time, relations with the European Union and the United States are increasingly cold. Meanwhile, although Algeria’s president visited Saied and approved a loan of $300 million, this does not mean that Algiers will support the coup unconditionally, or that it will agree to all of Saied’s policies.

Despite these difficulties and challenges, Saied has decided to begin implementing his plans to change the constitution and the political system unilaterally in Tunisia. He has established an electronic consultation platform that he insists will engage the population in his plans for reforms. He has also announced that a constitutional referendum will be held on July 25, 2022, and then legislative elections on December 17, 2022 on the basis of the new constitution. Saied has hinted that the elections will not be supervised by the Independent Election Commission for which he has openly expressed disdain.

Saied has decided to begin implementing his plans to change the constitution and the political system unilaterally in Tunisia.

However, most political parties in Tunisia have called on the people to boycott this electronic consultation. Moreover, many people in Tunisia do not have the ability or access to participate in such a consultation, or the technical skills necessary even if they wanted to. This means that in reality, Saied is effectively using the electronic platform as a cover to make changes according to his own whims and desires, while knowing full well that such a process will not be recognized by the country’s political class. In other words, Saied’s “process” will only serve to deepen the constitutional and legal crises in the country.

Tunisia is at a crossroads. On the one hand, there is Saied’s individual and totalitarian project that threatens a return to the days of tyranny. On the other, there are the forces of political and civil society seeking to restore democracy, constitutional legitimacy, and the rule of law.

Support for Saied is decreasing day by day as the reality becomes clear to the people. There are no longer any prominent political groups that support the coup except for a pan-Arab nationalist-oriented political trend that only serves to remind people of the bitter experiences of tyranny that Arab populations have endured under regimes that touted nationalist slogans.

Meanwhile, the camp of the civilian democratic forces is growing in number, and there are increasing efforts to unite its components on a common political program that will enhance the chances of defeating the political coup and rescuing Tunisia from its clutches.

There is no doubt that the situation in Tunisia was bad before Kais Saied’s coup; however, it is even clearer that it is has become worse since the coup. Autocracy, combining all the powers in the hands of one person, is not the solution to the difficulties facing the consolidation of democracy in Tunisia.

Tunisians now find themselves facing a historical political battle to decide their fate, and to regain their freedom and dignity. There must be no doubt that to remain silent on what Saied is doing to democracy, the constitution, the rule of law, and the state institutions, will sooner or later bring the roof tumbling down on everyone’s heads.