Greece Accuses Turkey to Gloss Over Its Violations of International Law 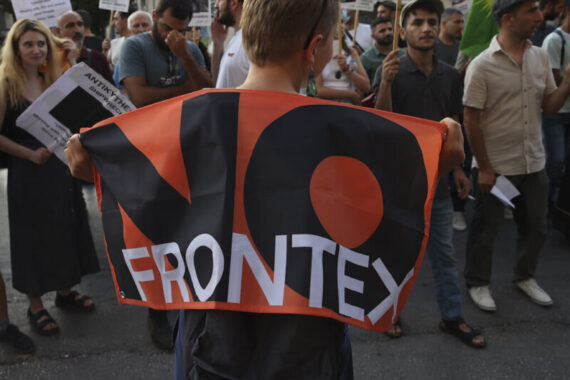 A group of protestors, holding banners and placards, gather to protest against the Greek security forces pushing back the refugees in Athens, Greece on June 08, 2022. Photo by Anadolu Images

n October 15, Greece accused Turkey of abusing 92 migrants discovered naked and injured close to the Meriç River (Evros River), which serves as a natural border between the two countries.

The UNHCR demanded an urgent investigation and called the incident shocking, declaring that the images of the migrants were deeply distressing.

The Greek police stated that their investigation together with Frontex, the EU’s border agency, found evidence that the migrants crossed from Turkey to Greece in rubber dinghies.

It was claimed that the migrants had been forced by Turkish authorities to board three vehicles that took them to the border, and forcibly stripped naked before being placed in dinghies.

However, a recently leaked report by the European Anti-Fraud Office (OLAF) raises concerns about systematic misconduct from both the Greek border and coast guard authorities and Frontex.

Read: How Greece Obstructs the Settlement of Aegean Maritime Disputes

Notis Mitarachi, the Greek Minister of Migration and Asylum, said that Turkey’s behavior exceeds all limits. On October 16, he tweeted, “Turkey’s behavior towards 92 migrants whom we rescued at the borders today is a shame for civilization.” “We expect Ankara to investigate the incident and protect, at last, its border with the EU.”

Ibrahim Çataklı, Deputy Interior Minister of Turkey, replied to the tweet as follows, “As you couldn’t find one single case of a human rights violation by Turkey, you just seek to expose the image of your own cruelty as if Turkey did it.”

The Turkish Presidency’s Director of Communications Fahrettin Altun responded a day later with a series of tweets saying the allegations were “groundless and unfounded” with the intention of “putting our country under suspicion” and that “Greece once again showed the whole world that it does not even respect the dignity of these oppressed people, by publishing the photographs of the refugees it has deported, extorting their personal belongings.”

On October 17, Mitarachi claimed that Turkey deliberately directed immigrants across the EU border as migration has become a sensitive topic for the upcoming 2023 elections in Turkey.

He told the Greek-based channel SKAI TV that Turkey is in a very difficult position because these 92 people were found by Frontex itself which confirmed the incident.

Read: Can the Greek Strategy of Counterbalancing Turkey Work?

Turkey’s Ministry of Internal Affairs  released a lengthy statement. In the statement, the ministry claimed that Greece was desperate on account of its inhumane treatment of migrants being made public by Turkish officials.

“It is very apparent that Greece is trying to cover up the systematic unlawful pushbacks they have been doing routinely by confiscating all the belongings of the migrants including their money, phones, IDs, and passports, throwing them into the sea, by taking all their clothing and shoes, battering them naked with batons, injuring them with electro-shock devices, shooting at them with rubber bullets or putting them on worn-out lifeboats,” the Turkish ministry said in the statement.

It added that these incidents have been documented in images and reports.

“Just last month they punctured the boat of a group of migrants including babies and infants who were trying to reach Italy from Lebanon. Having lost all their valuables, these people were left to die,” the ministry stated.

The statement also highlights that Athens is under pressure due to its violations of international law, and that a report by OLAF found abuse, irregularities, and cover-ups by the EU border agency, Frontex.

“Within this context, we underline that the fact that the Greek Minister for Migration and Asylum still holds his office and continues his baseless allegations against our country, whereas the Executive Director of Frontex was discharged from his position during the investigations and supervisions on the pushbacks, is unacceptable and we leave this to the discretion of the public opinion.”

On October 14, a report by OLAF was leaked, in which it found individuals at Frontex, the European border and coast guard, complicit in pushbacks violating migrants’ “fundamental rights” and in partaking in misconduct.

The report shows that Frontex in collaboration with the Greek government mishandled and failed to report or investigate pushback accusations and evidence.

The investigation was conducted with information from open sources, media reports, documents from Frontex and the European Commission as well as interviews with 20 witnesses.

“OLAF concludes, based on the evidence collected during the investigation, that the allegations are proven,” the report reads. Frontex stated that it took remedial action and did not refute the accusations.

A 2021 Amnesty report found that Greek human rights violations have become “an entrenched practice.” It revealed that especially in the Meriç (Evros) region, Greece used excessive violence against immigrants and refugees in February and March 2020.

Around 61,800 migrants have been pushed back by Greek authorities since 2020, 152 of which lost their lives, while 200 were injured, according to the Turkish Ministry of Interior Affairs.

Turkey regularly accuses Greece of violently pushing back migrants before they can file asylum claims, while Greece accuses Turkey of pushing forward migrants to pressure and destabilize the EU. Meanwhile, tensions remain high between the fallen-out neighbors due to issues such as maritime border altercations and Greece’s armament of the Aegean islands.