Can the Greek Strategy of Counterbalancing Turkey Work?

Greek military and diplomatic initiatives carry the risk of creating further tension in the Aegean, if Greece pushes Turkey to bigger security dilemmas. 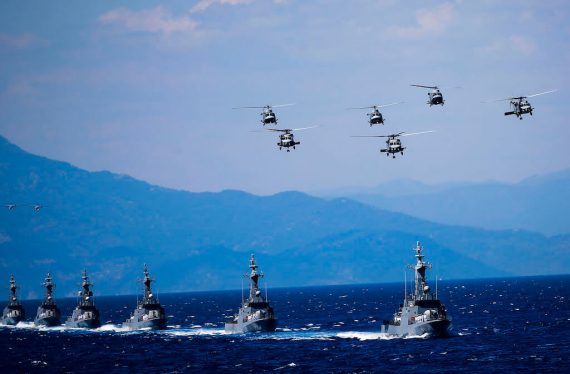 Despite its limited capacity, Greece assumes itself to be a major playmaker in regional politics, and thus follows an aggressive foreign policy towards Turkey. It’s worth asking why Greece pursues this strategy and what it hopes to achieve.

Neorealism, also known as structural realism in International Relations, offers a simple answer to this question: “Greece is trying to balance Turkey.” Drawing on Kenneth Waltz, the pioneer of the Neorealist School, states try to balance other states, which they lag behind, or try to limit others’ ability to some extent by resorting to internal balancing and/or external balancing mechanisms.

Internal balancing is the first and most common method of a balancing strategy. This happens as states strengthen their material capacity and power, and when they try to survive by their own means in the anarchic world system. If this is not enough, they resort to external balancing either to defend themselves or to minimize the threats they face. This generally occurs when states look to form alliances with stronger states. In this regard, Greece applies both internal and external balancing methods in order to counterbalance Turkey.

Following the Kardak (Imia) crisis with Turkey in 1996, Greece launched an armament program as part of an internal balancing against Turkey and came a long way towards this purpose. However, it temporarily paused the program due to the 2008 economic crisis and its effects.

Since Greece’s domestic and national defense industry is weaker than Turkey’s, the country needs the support of other nations.

Thanks to the relative economic recovery in recent years and due to the current high tension in the Eastern Mediterranean, Greece resumed its armament program. In order to counterbalance Turkey, it launched a new armament and military modernization program. The Athens administration increased its armament expenditures fivefold in 2021 compared to 2020, and launched a 10-year armament program worth 10 billion euros.

Since Greece’s domestic and national defense industry is weaker than Turkey’s, the country needs the support of other nations. For example, Greece ordered a total of 18 fighter jets from France last year, with a cost of 2.3 billion euros. In 2021, it signed a contract to buy three frigates from France. Again in the same year, it purchased four warships worth $6.9 billion and signed an agreement with the U.S. for the modernization of its existing frigates worth $2.5 billion. These examples indicate that since Greece is incapable of modernizing its army by using its own sources, it needs outside support to activate its internal balancing elements.

Greece cooperates primarily with France and the U.S. It also has the political and economic backing of the European Union to deter Turkey. On September 28, 2021, Greek and French leaders signed the defense deal “Strategic Cooperation Agreement in the Field of Security and Defense” in Paris. The second article of the agreement reads that parties will support each other in case of an attack by a third country. Considering the present situation in the Eastern Mediterranean, this article definitely targets Turkey.

Already, following the signing of the agreement, Greek Prime Minister Kyriakos Mitsotakis pointed the finger towards Turkey when he said, “We all know who is threatening whom with ‘casus belli’ [occasion for war] in the Eastern Mediterranean.” This was followed by frequent and joint military drills in the Eastern Mediterranean conducted by France, the Greek Cypriot Administration of Southern Cyprus (GCA), and Greece.

The ongoing cooperation with the U.S. is also of particular importance for Greece. In addition to the Mutual Defense and Cooperation Agreement signed in 1990, a protocol was signed between the two countries in 2019. The protocol promises U.S. military support to Greece in return for a military base for the American army in Greece. Accordingly, in 2021, a new American base was established in Alexandroupoli, approximately 40 km from the Greek-Turkish border. The U.S. army dispatched a large number of armed forces to Alexandroupoli: only in the first week of December 2021, 73 helicopters and 995 pieces of equipment were dispatched to Alexandroupoli.

Greek army soldiers hold flags as they attend a military parade in Thessaloniki on October 28, 2021, during the celebrations marking Greece's National "Oxi" (No) Day, commemorating Greece's refusal to accept the ultimatum advanced by fascist Italy in 1940 during World War II. Photo by SAKIS MITROLIDIS/AFP via Getty Images.

Aside from the French and American military support, Greece uses its EU membership as a political and economic leverage against Turkey with the unconditional support of the GCA as its main ally in the region. So much so that Greece, acting together with the GCA, imposed sanctions on Turkey for its activities in the Eastern Mediterranean by using the EU’s legislative bodies, the European Parliament and the European Council. However, Turkey has not compromised its stance at the table and on the ground, and has insisted on protecting its rights in the region.

Can Greek counterbalance against Turkey work?

Read: Who is Concerned about Turkey’s Military Capacity in Greece?

Moreover, while Greece does not have any armed unmanned combat aerial vehicles (UCAVs) in its inventory, Turkey has 170 unmanned aerial vehicles (UAVs) and UCAVs, and almost all of them are produced domestically. These UAVs and UCAVs are Turkey’s strong trump card: they are battle-proven and have proven to be game changers in conflict zones such as Syria, Nagorno-Karabakh, and Libya. As for naval power, Turkey and Greece have more or less similar numbers of warships, frigates, and submarines. Overall, it is not possible for Greece to compete with Turkey in terms of total military power – at least not on its own.

Turkey and Greece are members of NATO and therefore Greece’s repertoire of moves against Turkey is limited.

The second pillar of Greece’s balancing strategy against Turkey is a relatively more functional deterring capacity. Undoubtedly Athens enjoys a high-level military cooperation with the U.S. and also benefits from the advantage of EU membership vis-à-vis Turkey, which is an EU candidate country. However, both Turkey and Greece are members of NATO and therefore Greece’s repertoire of moves against Turkey is limited.

It should never be forgotten that relations between states are interest-oriented and may change according to new conjunctures. Although Athens seems to have “secured” the support of the U.S. and France, nobody can know how long this alliance will last. In fact, the “AUKUS incident” experienced by France recently stands out as an example of how states can act against their allies when their interests are in question. Accordingly, Turkey’s determined stance to protect its rights in the Aegean and Eastern Mediterranean can foil Athens’s attempts to counterbalance Turkey politically, militarily, and economically.

To summarize, the Greek aggressive foreign policy to counterbalance Turkey pushes the Athens administration toward an extensive armament project and the modernization of its army. Greece has strengthened its cooperation with the U.S. and France and secured the political and economic backing of the European Union.

However, given the fact that the Turkish army is getting stronger every year by relying on its own domestic and national capacity, and given that Athens’s cooperation with France and the U.S. is susceptible to change in the long run, Greece may face disappointment in the future. Greek initiatives carry the risks of creating further tension and serious consequences if the country opts to lead Turkey toward security dilemmas instead of looking for ways to cooperate and establish permanent peace.