How Greece Obstructs the Settlement of Aegean Maritime Disputes

By closing the doors to negotiation, Greece opts for pressuring Turkey through political and military backing by the US and the EU. 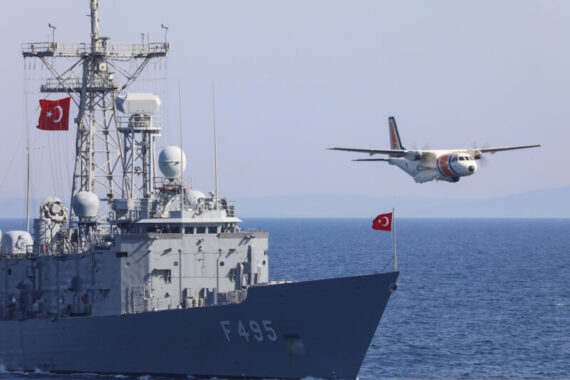 Sea Lion-2022 Search And Rescue Invitation Exercise held at Aegean Sea in Izmir, Turkey on May 12, 2022. Photo by Anadolu Images

he Lausanne Peace Treaty of 1923 was used to settle many disputed aspects of the Greek-Turkish traumatic relations in the early 1990s—but not all. In addition to the conclusively unsettled issues like the title to some islets in the eastern Aegean Sea, newly emerging rules of international law concerning maritime and airspace have created new areas of disagreements, such as the extent of the Greek territorial waters, national airspace, and the delimitation of the continental shelf in the Aegean Sea.

The Aegean Sea is characterized by disputes rather than friendly relations and cooperation. The two countries do not even agree on what constitutes the dispute in the Aegean Sea: while Greece maintains a “single-dispute approach,” Turkey argues that there are multiple disputes to be settled.

Greece’s long-standing insistence that there is only the continental shelf delimitation dispute leads to a restrictive approach. Greece submits the issue as such to the International Court of Justice (ICJ), which implies  one way of settlement. On the other hand, Turkey insists that there are many disputes such as the title to certain islets, the violation of the demilitarized status of the eastern Aegean islands, the illegitimate attempt to extend the Greek territorial waters beyond the current six miles, and the illegal extension of the Greek national airspace which is four miles wider than its territorial waters. Turkey’s perspective is that all these issues should be negotiated as a whole with any unresolved dispute eventually being brought to international adjudication.

With this approach Turkey insists that Greece acknowledges all the existing disputes that are key to a sincere negotiation. The next step, according to Turkey, would be bringing the unresolved disputes to the international courts in order to find durable solutions acceptable to both sides. However, Turkey’s stance is regarded by Greece as refusing to go to international adjudication, which is actually not the case.

Read: Can the Greek Strategy of Counterbalancing Turkey Work?

The first concrete sign of Greece’s single-dispute approach was to unilaterally submit the continental shelf dispute to the ICJ in 1976. The court ruled that it lacked jurisdiction to handle the case due to the lack of Turkey’s consent. This move is used by Greece to argue that Turkey is “against a legal settlement.”

The picture is, however, quite the opposite. Greece obstructed the process of finding a legitimate solution by bringing the dispute to the ICJ unilaterally. This is unequivocally evidenced in Greece’s 2015 declaration whereby it announced that it recognizes the compulsory jurisdiction of the ICJ ipso facto and without special agreement in relation to all legal disputes with any other state accepting the same obligation.

At the same time, Greece puts quite comprehensive restrictions on the compulsory jurisdiction of the ICJ. The first exception covers “any dispute relating to military activities and measures taken by the Hellenic Republic for the protection of its sovereignty and territorial integrity, for national defense purposes, as well as for the protection of its national security.”

This exception is vague and ambiguous enough that any issue which constitutes a dispute between Turkey and Greece could fall under its jurisdiction—therefore, all bilateral disputes can be excluded from the jurisdiction of the ICJ, thus obstructing the way to judicial means.

Greece goes even further by putting a further exception: “[a]ny dispute concerning State boundaries or sovereignty over the territory of the Hellenic Republic, including any dispute over the breadth and limits of its territorial sea and its airspace” is to be excluded from the compulsory jurisdiction of the ICJ.

This exception directly refers to the disputes in the Aegean Sea that Greece refuses to acknowledge. These are the disputes over the extent of the Greek national airspace, the territorial waters, and the delimitation of the Aegean continental shelf.

These restrictions are far-reaching because any issue which does not fall under the first two exceptions would still be excluded due to the fact that the other side has accepted the compulsory jurisdiction only in relation to that dispute or has accepted the jurisdiction less than a year prior to the filing of the ICJ application.

Reflections on the settlement of the Turkish-Greek disputes

Contrary to the distorted perception successfully created by Greece, it is not Turkey but Greece that has closed the doors to international jurisdiction as a way of settling Aegean disputes.

A review of the Greek declaration demonstrates that Greece excludes all the Aegean disputes from the jurisdiction of the ICJ. This is even true for the continental shelf dispute for which Greece once turned to the ICJ. The Greek refusal to go to the ICJ is so strong that the declaration lists the disputes by name such as the extent of the Greek national airspace, the territorial waters, and the delimitation of the Aegean continental shelf.

Ironically, Greece does not give any chance to negotiation either. Despite many meetings and even a process of talks initiated in 2002, which lasted for 14 years, all the meetings were declared by Greece as “exploratory.” The underlying reason behind the failure of the talks is the Greek refusal to acknowledge the disputes as real and existing.

Athens hides behind the shields of the U.S. and EU

By closing the doors to adjudication and negotiation, the only available means for a peaceful settlement, Greece chooses the way of pressuring Turkey through the United States’ and the European Union’s political and military backing. Contrary to Greece, Turkey has always favored negotiation as the most suitable way of settling the disputes, believing that without a truly friendly atmosphere and constructive dialogue no dispute settlement can be sustainable.

Turkey also believes that dialogue is the best way to protect the “Lausanne balance,” which is the balance between the rights and interests of the two countries in the Aegean Sea through a “comprehensive solution” for all Aegean disputes. Therefore, Turkey does not rule out any peaceful settlement contained in Article 33 of the UN Charter including having recourse, if necessary, to the International Court of Justice or any other third-party solutions based on the mutual consent of both countries.

In the face of the Greek denial, Turkey points out that Greece’s single-problem approach does not reflect the reality. Acknowledging only one of the problems in the Aegean Sea and turning a deaf ear to the many others as well as advocating for a selective solution is not the true path for a durable settlement. Despite all this, Greece seems to have closed all the possible doors to negotiation and adjudication. As the recent tension since April 2022 demonstrates, Greece prefers aligning with third countries to mount pressure on Turkey even though, in the long run, neither Turkey nor Greece can benefit from the involvement of external powers.