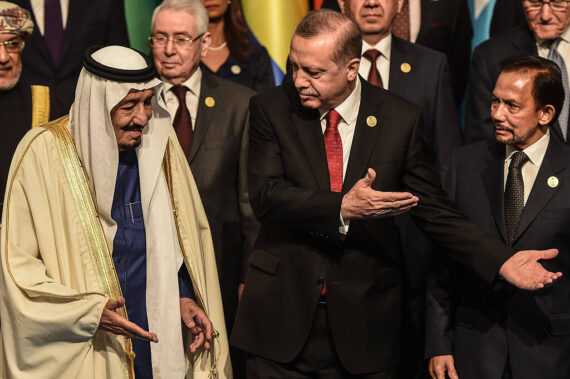 In the wake of the Arab Awakening in 2011, ties between Turkey and the Gulf duo, namely Saudi Arabia and the United Arab Emirates (UAE), began to deteriorate. This is particularly true after the counterrevolution led by Saudi Arabia and the UAE in Egypt where they bankrolled the bloody coup against the democratically elected government of the late president Mohamed Morsi and installed their henchman Abdel Fattah el-Sisi.

The failed coup in Turkey in 2016, the unjust blockade of Qatar in 2017, the Arab duo’s constant support of counterrevolutionary forces in Syria, Libya, and Sudan, and their anti-Turkey stance in the Eastern Mediterranean, have vitiated any chance to recuperate the fraught ties between Saudi Arabia and Turkey.

The rise of Mohamed bin Salman in Saudi Arabia and his alliance with UAE’s Mohammed bin Zayed made a deadly anti-revolutionary combination in the Middle East. This convergence of counterrevolutionary states ultimately resulted in putting Turkey and Saudi Arabia on the opposite sides of the conflicts in Syria, Libya, and Iraq.

In the Arabian Peninsula, Saudi Arabia is a “real” country with a huge land mass, significant native population, natural resources and, of course, the custodian of Mecca and Medina. All these aspects make Saudi Arabia an important player in the region and beyond.

Therefore, in the long run, Turkey would naturally want to avoid a direct confrontation with Saudi Arabia. On the other hand, there is no such direct competition between Turkey and the UAE. In fact, the UAE is the pawn of major powers that are opposed to Turkey’s growing profile in many important regions of the world.

There is no match between the national power of Turkey and that of the UAE. That’s perhaps one of the reasons why we see direct criticism of the UAE by Turkish authorities.

Conversely, one could argue with great confidence that Saudi Arabia’s capacity to withstand Mohamed bin Salman’s perturbations and the kingdom’s chances to remain a major regional player are high, unlike the Emirati “sand castle” that is open to vulnerabilities of all sorts and is even open to collapse as a result of Mohammed bin Zayed’s erratic foreign policy decisions.

In the last few years, due to its reckless foreign policy, Saudi Arabia has squandered a lot of good will and this seems to have been realized in Riyadh, which used to be a considerable soft power and, for good reason, held the status of an arbiter among its fellow Muslim countries.

The Saudi reconciliation with Qatar after the three-year embargo which was later followed by the UAE, Bahrain, and Egypt may pave the way for a possibility of Saudi-Turkish rapprochement.

Turkey does not pose any kind of threat to Saudi Arabia and its internal political consensus. What Turkey expects from Saudis, though, is to disassociate itself from UAE policies in the region, which Turkey feels are designed in Western capitals for the purpose of destabilizing the region.

Turkey has made sure to avoid direct confrontation with Saudi Arabia, while the Saudis are cognizant of the fact that they stand to lose a lot in any direct conflict with Turkey. All these factors make the rapprochement between Turkey and Saudi Arabia more likely. The Saudi reconciliation with Qatar after the three-year embargo which was later followed by the UAE, Bahrain, and Egypt may pave the way for a possibility of Saudi-Turkish rapprochement.

Turkey in the Arabian Peninsula

Turkey’s steadfast support of Qatar helped it establish itself in the Arabian Peninsula as a new security guarantor in the Gulf Cooperation Council (GCC). Turkey’s unequivocal support and Qatar’s persistence and perseverance in resisting the pressure, forced the Arab duo, in addition to Bahrain and Egypt, to forgo forever all the 13 conditions they had laid down to Qatar in 2017.

The demands included closing Al-Jazeera TV, shutting the Turkish military base, and downgrading ties with Iran. Qatar rejected all demands. Besides Qatar, two other GCC member countries, Kuwait and Oman, have long been developing their ties with Turkey. In this regard, Turkey’s increased profile in the GCC and in the Middle East may prompt Saudis toward a reconciliation.

A substantial number of Saudi Arabia’s power brokers have always viewed the embargo on Qatar as a bad policy and have known that a direct confrontation with Ankara would be harmful for Riyadh. Saudis also know that the ghost of journalist Jamal Khashoggi’s brutal murder in the Saudi consulate in Istanbul will not disappear easily.

The Saudis and Emiratis mostly rely on the United States for their security, and regionally they rely on Egypt and Pakistan.

Though there have always been uncertainties in Saudi policies and abrupt changes can be expected, Saudis usually do not go beyond a certain point when it comes to confronting or criticizing the major Muslim countries such as Turkey, Pakistan, Iran, Indonesia, and Egypt.

The Saudis and Emiratis mostly rely on the United States for their security, and regionally they rely on Egypt and Pakistan. Since Pakistan signed the bilateral security agreement with Saudi Arabia in 1982, it has been assisting the Saudis in areas like military training and defense production.

It is extraordinary that the Pakistan government allowed General Raheel Sharif, who retired as army chief in November 2016, to move to Saudi Arabia as a top military advisor. It’s not talked about in a pretentious way, but there is a Pakistani commitment to intervene in a decisive manner if Islam’s holiest cities come under threat and Saudi Arabia seeks help.

he first priority of Saudi Arabia and the UAE has always been the preservation of their regimes. They are now anxious as their chief security guarantor, the United States, is going through a tumultuous period in its domestic politics. The Biden administration appointees are not giving clear indications as to what sort of foreign policy goals they will pursue in the Middle East.

The multibillion-dollar investment in Egypt is also not sustainable since el-Sisi himself is engulfed in many crises and won’t be able to rescue the Saudis and Emiratis even if he wants to do so. On the other hand, Pakistan, which has long played a role in guaranteeing Saudi Arabia’s territorial integrity and the regime’s security, holds significance for Saudi Arabia beyond a desire to cultivate religious ties and assert its soft power.

As the world’s fifth most-populous country and a nuclear power, Pakistan’s market and security dimensions have been attractive to the Saudis. However, Pakistan is wary of joining Saudi regional power games and its feckless rivalries with other countries in the region as was evident in its unwillingness to support the kingdom in the imprudent Yemen war. Therefore, the monarchies of Saudi Arabia, the UAE, and Bahrain feel very anxious in the fast-changing regional and global scenarios.

Saudis in particular would not want to annoy Turkey. Even after putting maximum pressure, the Saudis and Emiratis could not discourage their close ally Pakistan from deepening political and military ties with Turkey. It seems that Saudi Arabia has now realized that it can’t do much to stop the new realignments in its neighborhood, and any new realignment -with or without Iran- in the region will definitely not toe the line of abrasive Saudi policies.

A beleaguered UAE will have to reconcile with Turkey when it realizes that the U.S. is less interested in providing security to the GCC and the Middle East, and that certain fragile European powers have also lost the appetite to indulge in conflicts in the foreign lands of the Middle East.

After successfully scoring some major foreign policy victories in Libya, Syria, Iraq, and Caucasus, and managing to thwart looming threats in the East Mediterranean, Turkey entered 2021 in a reconciliatory mode. Turkey has already started putting in place measures to normalize its relations with the EU, Greece, Israel, and France – albeit from a strong position.

So, it is expected that Turkey will also show goodwill towards normalizing ties with Saudi Arabia. The UAE may follow suit but the scenario whereby UAE foreign minister Anwar Gargash set the precondition for normalization between his country and Turkey as the latter ending support for the Muslim Brotherhood seems highly unlikely.

Also Read
War Within War in Yemen: Agendas and Prospects of Warring Parties