Even if competition is more than likely to continue, reconciliation between Qatar and the Saudi bloc can incentivize the parties to limit the scope of their rivalry to avoid another intra-Gulf rupture. 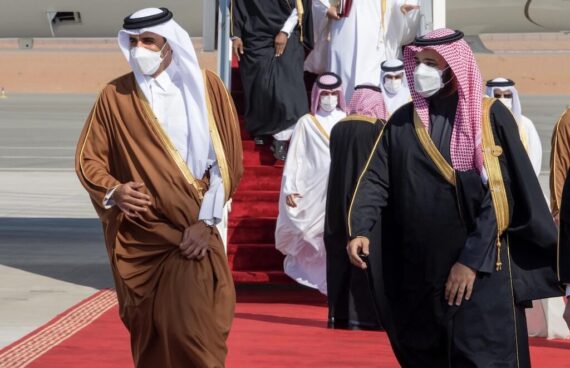 After three and a half years of paralyzing strife, the blockade of Qatar was brought to an end ahead of the 41st Summit of the Gulf Cooperation Council (GCC), turning the page on perhaps the darkest period in the union’s four decade history.

The diplomatic breakthrough was heralded by the arrival of Sheikh Tamim bin Hamad on a Qatar Airways flight to Al-Ula, Saudi Arabia. In an astonishing scene given the acrimony of the past few years, Sheikh Tamim was greeted and embraced on the tarmac by Saudi Crown Prince Muhammad bin Salman—widely considered one of the two main architects of the blockade along with Muhammad bin Zayed, the crown prince of Abu Dhabi.

Despite the geniality on display between the two Gulf leaders, however, it is difficult to mask that the reconciliation is both limited and fragile. Ending the blockade does not resolve the underlying frictions between Gulf states that led to the crisis in the first place.

Moreover, the absences of Muhammad bin Zayed and the King of Bahrain from the summit given this year’s heightened importance, has led some observers to speculate that rapprochement with Qatar was a Saudi-led initiative that the other partners to the blockade perhaps felt less enthusiastic about bringing to an end without achieving concessions from Qatar.

Read: Why the Gulf Crisis is Here to Stay

High ranking army officers of Kuwait, Oman, Bahrain, Qatar, UAE, and Saudi Arabia pose for a photo during a meeting for the chiefs of staff of the six GCC states in Kuwait City on September 10, 2018. Photo by Defence Ministry of Qatar, Anadolu Images

Indeed, the only publicly-acknowledged requirement of Doha was to drop all pending lawsuits against the blockading countries in international fora. In other words, nothing that preceded the rift itself.

That being said, it is difficult to argue that reconciliation was not a win-win for the entire GCC. While the Gulf body was never a model of effective multilateralism, restoring unity offers mutual benefits for all its members, as well as its foreign partners who have had the extra burden of navigating its fractured politics since June 2017.

Normalizing ties within the GCC allows for the resumption of cross-border cooperation and coordination at a time when all six members face a confluence of challenges on political, economic, security and public health issues.

No GCC member, for example, is immune to the severe downturn in global energy prices, the Covid-19 pandemic, or the potential outbreak of war with Iran and its consequences. Addressing complex challenges like these will always be more effective as a united bloc.

Fragile and limited: Will conflict return?

Discord among states in the Arab Gulf is common, often stretching back generations and tied to tribal rivalries and territorial disputes. Yet the acute tension between Qatar and its neighbors developed in the mid-1990s, when Sheikh Hamad bin Khalifa took control of the state in a bloodless coup against his father.

In 2014, a significant diplomatic rupture occurred between the same GCC members (minus Egypt) that was only brought to a close after nine months of Kuwaiti-led mediation. At issue was Qatar’s support for revolutionary forces, especially Sunni Islamists who were making significant gains amid the upheaval, as well as its positive relations with regional powers Iran and Turkey, all of whom Saudi Arabia, the UAE and Bahrain felt threatened Gulf interests.

When Donald Trump visited Saudi Arabia shortly after becoming President of the United States in 2017, the Saudi-led axis felt it had received a green light from the new American leader to dramatically escalate the pressure on Doha and, perhaps, bring it to its knees once and for all. However, with the help of Turkey, Qatar was able to survive the initial shock of the blockade, ward off a potential military invasion, and steady itself in preparation of a long, drawn out affair.

So why has it now come to an end? Simply put, this policy gambit failed to achieve its objectives. Qatar not only resisted capitulation but became more independent as a result of having to find alternative supply and support networks. The state was also pushed further into the orbits of Turkey and Iran, two external powers that the Saudis were hoping to steer Qatar away from. As a result, the rivalry sharpened as every conflict in the region became a venue for geopolitical competition between the Qatari-Turkish axis on one side and the Saudi-UAE axis on the other.

Moreover, in order to discredit each other, the Gulf states waged propaganda and influence campaigns in the local and international press, in think tanks and in the halls of government around the world, with mutual recriminations damaging both sides. And while Qatar suffered the worst economically from the blockade, all states in the region and their publics felt the impact of disruption to regional trade, and to the flow of people and goods as lives and families were upended. At some point, the costs of the blockade far outweighed any possible gains.

The timing of the reconciliation, however, is unmistakably a result of Joe Biden’s triumph in the 2020 U.S. presidential election. Without Donald Trump to shield Saudi Arabia from the consequences of its adventuristic foreign policy, it became necessary for the Saudi leadership to recalibrate those policies so that it does not stand in contention with the administration on too many fronts.

The Saudis and their Gulf allies also surely want to sit at the table if and when the U.S. reengages with Iran. It is more likely that happens with a united GCC.

Yet none of the reasons that may have prompted the decision to end the blockade actually resolves the underlying source of tension that instigated it. Does that mean another diplomatic rupture is inevitable? Not necessarily.

The engagement of these blocs in a power competition has certainly intensified and regionalized local conflicts in the Middle East, North Africa and beyond.

Perhaps reconciliation between Qatar and the Saudi bloc will incentivize the parties to limit the scope of their rivalry in order to avoid another intra-Gulf rupture, even if competition is more than likely to continue.

Moreover, a unified GCC provides a forum for cooperation, which will hopefully break the prevailing dynamic of feeling locked in a constant, boundless competition, which is the foundation of a Cold War. While the risks remain considerable, the possibility of change is now one step closer.

Omar H. Rahman is a political analyst and writer focused on the Middle East and American foreign policy. He is currently a visiting fellow at the Brookings Institution's Doha Center, where he is writing a book on Palestinian political and communal fragmentation.