Despite Emirati unwillingness, Riyadh was keen on lifting the blockade on Qatar. Moreover, Saudi Arabia and the UAE pursue different policies toward Turkey and breaking up their partnership over Yemen. 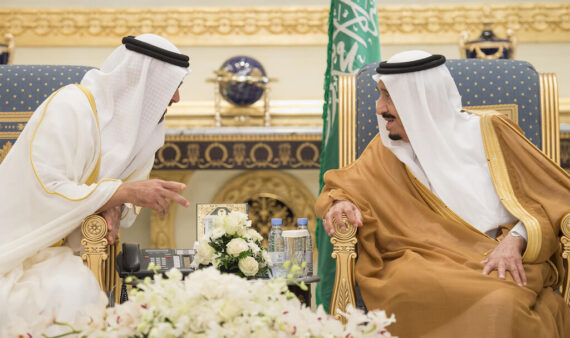 The United Arab Emirates (UAE)-Saudi Arabia alliance has been one of the most durable alliances in Middle East politics in the last years. Despite the fact that the two countries have enjoyed strong relations during the past decade, the current form of strategic alliance dates back to 2015 when Saudi Arabia’s King Abdullah passed away and Salman bin Abdulaziz came to power. Major players in the alliance have been King Salman’s son Mohammed bin Salman (MBS) and the Crown Prince of Abu Dhabi Mohammed bin Zayed (MBZ).

The UAE-Saudi alliance involved Egypt and Bahrain over a short period and turned into a political axis. Even though it has many weaknesses, the UAE-Saudi alliance remained solid and somewhat unified in regional and foreign policy issues from Yemen to Libya, the hostility towards Turkey, Iran, and Qatar, and the warming relations with Israel.

Signals of change in Saudi Arabia

Hostility towards Turkey takes the lead in the foreign policy priorities of the axis countries. This situation became more acute following the coup attempt in Turkey in 2016. So much so that it has been debated internationally whether this axis financially supported the coup plotters in Turkey.

During the Riyadh and Abu Dhabi-led blockade against Qatar in 2017, Doha’s cooperation with Turkey was cited as a reason and the two countries stipulated that Turkey’s military base in Qatar needs to be removed. While the UAE-Saudi Arabia axis continued its anti-Turkey policies, it also followed similar policies in the Eastern Mediterranean, the Horn of Africa, Libya, Syria, Iraq, and lately in the Maghreb region.

However, members of this alliance do not have an entirely overlapping motivation in confronting Turkey. Indeed, while the UAE has adopted a stern anti-Turkey position in many respects, Saudi Arabia has demonstrated a somewhat more conciliatory attitude on certain issues than Abu Dhabi. Saudi government officials have different opinions on Turkey and the Saudi has government adopted a softer and warier policy.

Despite divergences, the history of bilateral relations between Saudi Arabia and Turkey shows that the leaderships of both countries have somehow succeeded in protecting the bilateral ties. However, following the assassination of Jamal Khashoggi in Saudi Arabia’s consulate in Istanbul and Turkey’s insistence on bringing those responsible for the murder to justice pushed some actors inside the Saudi government to take a firmer stance against Ankara.

Therefore, the hostility towards Turkey in Saudi Arabia has been local and limited to certain cliques in the Saudi government circles and, hence, should not be generalized to the entire Saudi leadership.

Preparation for the Biden administration?

With Joe Biden winning the 2020 U.S. presidential election, there have been some positive signs by the Saudi government towards Turkey. After the deadly earthquake in Izmir in October 2020, King Salman ordered aid to be sent to Turkey, using the expression “Our brothers in Turkey” – a noted, and important, improvement in bilateral relations. Unlike the UAE, Saudi Arabia was among the first countries to offer condolences to Turkey.

Following this step, a phone call between King Salman and Turkey’s President Recep Tayyip Erdoğan took place before the G-20 Summit, which was held online under the term presidency of Saudi Arabia. The two leaders exchanged views about improving bilateral relations, solving existing problems, and opening the door for dialogue that would further mend ties.

Despite the positive developments between Turkey and Saudi Arabia, the UAE strategy towards Turkey does not show any signs of a constructive attitude to date. Even though the Emirati State Minister for Foreign Affairs, Anwar Gargash, made some positive comments on the Turkey-UAE relations, Abu Dhabi has not taken any concrete steps toward Ankara. On the contrary, during the past months, the UAE intensified and strengthened diplomatic relations with Greece, Armenia, and the Greek Cypriot Administration of Southern Cyprus (GCASC), all of which have problems with Turkey.

UAE officials hosted Armenian President Armen Sarkissian and Greek Prime Minister Kyriakos Mitsotakis, and held talks with them on the development of relations and the protection of common interests. The UAE’s improving relations with Armenia pushed the country to adopt a more pro-Armenian policy in the recent Nagorno-Karabakh conflict and the rapport with Greece in the East Mediterranean shows that the UAE targets Turkey when it comes to regional politics.

The cooperation declaration and various agreements signed between Greece and the UAE following the meeting between Mohammed bin Zayed and Kyriakos Mitsotakis indicate that they are not reflections of a responsive policy but rather resonate from  a long-term consensus that could trigger further instability in the region.

The latest UAE attempt was to establish cordial relations with France along with Greece, Armenia, and the GCASC. The UAE supported France’s destabilizing policies in the Eastern Mediterranean, Nagorno-Karabagh, and Libya, and stood against Turkey on all fronts.

Saudi Arabia’s and the UAE’s differing policies toward Turkey are a clear divergence between the alliance. Besides this, both countries are breaking up their partnership over Yemen. Mistrust first surfaced in February 2020, when the UAE withdrew its military presence from Yemen and did not adopt a wholesale aggressive rhetoric against Iran in the region.

The UAE supported France’s destabilizing policies in the Eastern Mediterranean, Nagorno-Karabagh, and Libya, and stood against Turkey on all fronts.

This caused a disturbance in Saudi Arabia and undermined the nature of the alliance. In addition, the UAE’s decision to normalize relations with Israel, pulling Bahrain and Sudan along, substantiated the divergence, caused further discomfort, and attested to the loss of a mutual vision on regional leadership between the two. The UAE’s normalization with Israel increased the pressure on Saudi Arabia.

However, Saudi officials know well that if they sign the normalization deal with Israel, their regional leadership quest will suffer an incurable loss of prestige. The Israeli normalization was another reason Saudi Arabia was disturbed by the UAE.

Given the divergences between the UAE and Saudi Arabia, their formidable alliance seems to be weakening. The UAE has suffered serious damage to its prestige in the eyes of the Arab people for initiating normalization with Israel and this may gradually bring about its isolation in regional politics.

The Saudi–UAE alliance concurrently targeting Turkey, Iran, and Qatar illustrates regional dimensions of rivalry and balance politics. Long before the recent rapprochement between the GCC countries, Saudi Arabia already refrained from a strict boycott on Qatar in 2017 and left the door open for dialogue to solve the political crisis in the Gulf.

However, until recently, the UAE has refused and resisted any dialog concerning the Gulf. Even the Saudi Arabia-initiated normalization with Qatar in early January 2021 was not embraced by the Emirati leadership. Despite Emirati unwillingness, Riyadh was keen on lifting the blockade on Qatar and Abu Dhabi had to follow suit.

Finally, Saudi-UAE divergence on Turkey is another dimension. Turkey’s perspective on the new alliance politics in the MENA region is that it expects the UAE to abandon confrontational language and actions and to adopt a constructive and cooperative attitude. The Turkish government is showing signs that it is willing to give cooperation with the UAE and Egypt a chance similar to the positive approach adopted recently toward Saudi Arabia.