How are Turkey's Political Parties Pursuing their Election Campaigns?

According to YSK rules, pre-election restrictions will be implemented by June 14 and parties will have to re-organize their campaign strategies according to these restrictions. 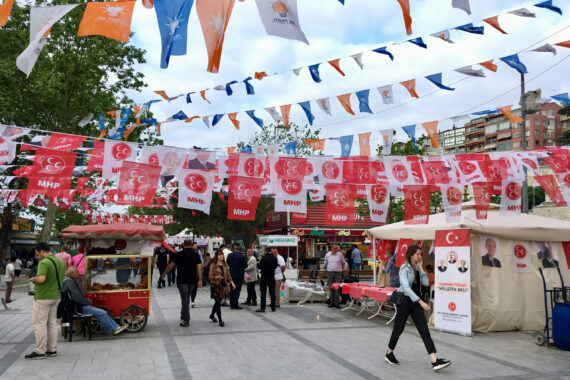 In two weeks, Turkish people will go to the polls to elect the members of their Parliament and President. In this process, political parties are still running their campaigns in order to increase their votes. The running AK Party is designing its campaign on the basis of the progress made by Turkey under the AK Party governments. Furthermore, the party also proposes new projects to accelerate this progress in the new era, which is called “the rise.” Nonetheless, some opposition parties cannot keep away from falling into the trap of populism and use populist discourse in accordance with their strategic needs. Because of this reason, it is important to examine prominent dimensions of election strategies of political parties.

Because the AK Party had already initiated its campaign towards the next elections and conducted meetings throughout the country before the announcement of snap elections, it is the most prepared party compared to others. After the snap election decisions, the party accelerated and broadened the scope of the campaign.

Indeed, the party’s electoral strategy has depended on a two-dimensional political space. In the first space, the party prefers traditional methods based on direct contact with masses and visiting people’s houses. It is well known that President Erdogan cares about this method very much and urges party branches to listen to the demands of people face to face. Additionally, the party also organizes mass meetings in each province of the country in order to reach to people as part of this method in the field.

On the other side, the party also prefers to use innovative methods via internet and social networks. All party representatives use social media channels actively especially to widen their voter base. The details of the AK Party’s election strategy are shared day by day on the party’s official website and social media channels. The combination of these two dimensions turns the party’s campaign into a more dynamic and active process. This is one of the reasons that makes the party’s campaign more successful compared to the strategies of other parties.

The main opposition party CHP also uses two-dimensional methods in its campaign strategy. Nonetheless, the gap between the presidential election campaign and parliamentary campaign causes some crisis within the party structure. Because Kilicdaroglu and Ince are conducting their election campaigns separately, they have a contradictory discourse. For instance, they have different opinions about each other’s success and possible vote rate in the elections.

Other political parties also use diversified political campaigns. The MHP pays attention to direct contact with people rather than organizing large-scale meetings. The Iyi Party, on the other side, tries to introduce itself to the masses and designs its campaign on this basement. All parties will maintain their campaigns until the elections. However, according to YSK rules, pre-election restrictions will be implemented by June 14 and parties will have to re-organize their campaign strategies according to these restrictions.