Experts argue that governments and NGOs must provide quick answers when demanded and abide by regulations. 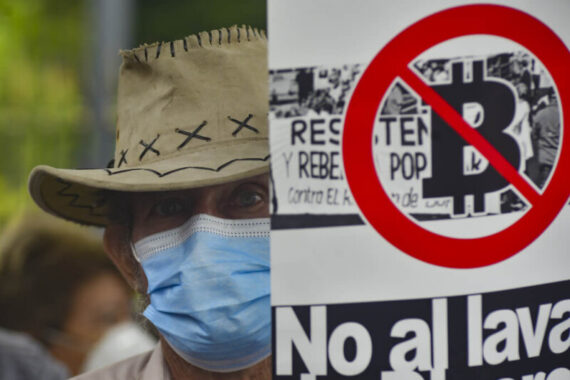 Salvadoran social organizations protest against the Bitcoin Law promoted by the government and approved by the Salvadoran Congress, in San Salvador, capital of El Salvador, on September 1, 2021. Photo by Anadolu Images

hainalysis, a Singapore-based blockchain data platform, published a report, which claims that cryptocurrencies are used to finance terrorism. According to the research, in 2021, terrorist groups like Al-Qaeda and Daesh (ISIS) attempted to finance their operations by using cryptocurrencies. Experts consider providing funding to non-state actors and similar actions as “terrorism financing.”

According to the 2022 Crypto Crime Report, Al-Qaeda bought cryptocurrency in 2019 and 2020 via Facebook groups and Telegram channels. According to the report, the money services businesses (MSBs) which enabled some of these transactions were detected by the Federal Bureau of Investigation (FBI), Homeland Security Investigations (HSI), and Internal Revenue Service, Criminal Investigation (IRS-CI).

The al-Qassam Brigades, the military arm of Hamas, as a non-state actor collected more than $100,000 in donations in early 2021, the report claims. Additionally, the Israeli government confiscated a large portion of it from related MSBs in July.

How Non-state Actors Use Cryptocurrencies

The National Bureau for Counter Terror Financing (NBCTF) announced on June 30, 2021 that it confiscated cryptocurrencies from numerous wallets linked to Hamas-funding operations. This action comes after a long investigation into these activities. According to many media accounts, the operation followed a significant surge in bitcoin donations to the al-Qassam Brigades in May 2021 as a result of heightened fighting between Hamas and Israeli forces.

In recent years, Hamas has suffered financial woes due to the lack of cooperation between banks and the organization. To overcome its financial difficulties, in 2019, Hamas asked its supporters to donate in Bitcoin.

The NBCTF seized assets including Bitcoin, Ether, Tether, and XRP. According to the Chainalysis report, the seizure was made possible through a review of blockchain data and open-source intelligence (OSINT). This is the first cryptocurrency confiscation specifically targeting a non-state actor, containing a variety of digital currencies.

The G20 Bali Summit, which took place on November 15-16, was expected to place a strong emphasis on the regulation of cryptocurrencies due to the rise in their use and in money laundering. The final declaration of the 17th meeting of the G20 gained a lot of attention as it called on the OECD to improve its commitment and monitoring of the widespread implementation of the Global Forum on Transparency and Exchange of Information for Tax Purposes. The declaration also welcomed the MSB’s approach to establishing a comprehensive international framework for the regulation of crypto assets and their activities based on the principle of “same activity, same risk, same regulation.”

Experts argue that governments and NGOs must provide quick answers when demanded and abide by regulations.

Read: Operation HAECHI III Was a Big Blow to Cybercriminals

Daesh’s use of cryptocurrency has constantly increased as the terrorist organization cannot use conventional financial transaction methods. Many MSB systems, such as PayPal and MoneyBeam, can be accessed globally, are used to transfer funds quickly, and, most importantly, it is difficult to identify the actual end-user.

Hence, terrorist groups are able to use shell companies and fast money transfer to move financial assets into their accounts. On the other hand, while there is a customer identification rule in traditional banking activities, MSBs offer legal loopholes as well. Terrorist groups can benefit from these loopholes to conduct transactions with anonymous accounts. Daesh realized this and started using PayPal and Bitcoin.

In 2017, U.S. citizen Zoobia Shanaz was charged with money laundering. Shanaz used cryptocurrencies, including Bitcoin, through stolen cards to support Daesh in Iraq and Syria, raising as much as $85,000. A review of the U.S. official sources on the investigation does not provide detailed information on how the fraud was perpetrated.

The report “Bitcoin and the Dark Web: The New Terrorist Threat” published in 2018 by Antonia Ward, a RAND Europe analyst, notes that Daesh raised funds using cryptocurrencies in 2014. The clearest evidence is that the list of weapons such as rockets, rifles, grenades, and other equipment were given with prices in cryptocurrency. A campaign called “Jahezona” was launched and Bitcoin QR codes were added.

On another occasion, Daesh launched advertisement campaigns by sharing Bitcoin addresses. The transactions that ensued took place on the dark web.

Similar to Daesh, Al-Qaeda has used cryptocurrencies. The year 2019 saw the solicitation of Bitcoin donations using a Telegram account called “Tawheed” and Jihad Media, which purportedly had ties to Al-Qaeda groups in Syria back then.

Al-Qaeda requested donations using the slogan “Fundraising Campaign – Finance Bullets and Rockets for the Mujahideen,” and supplied a Telegram account to contact for more information. Donations were requested via a variety of channels, including Bitcoin, Western Union, and PayPal.

As terrorist organizations quickly adapt to technological innovation for survival, eradicating them is becoming harder.

Burak Selçuk AYDIN’s areas of expertise cover cyber security, cyberspace, security, and terrorism. AYDIN has received his BSc in Law at the University of Tübingen in Germany and İstanbul Medeniyet University in İstanbul. Afterwards, AYDIN served in many positions such as the United Nations Office for Counter-Terrorism(UNOCT), the Office of the United Nations High Commissioner for Human Rights and Turkish Competition Authority. AYDIN is currently studying MSc. Data Science in Berlin.