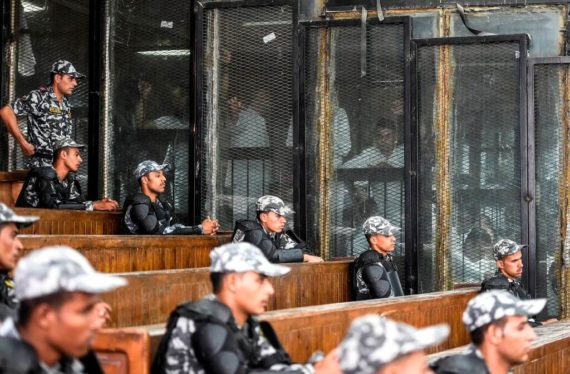 Members of Egypt's banned Muslim Brotherhood are seen inside a glass dock during their trial in the capital Cairo on July 28, 2018. Getty Images

8 years after the Arab Uprising, which sought radical institutional reform, the primary obstacle to the just rule of law in Egypt is ‘political.’ The entrenched military elite have remained reluctant to any alternative judiciary system that attempts to create a center of authority beyond their control. The political transition, indeed, created a possibility of institutional reform, where the state and society would be equally accountable to the rule of law. However, Egypt’s judiciary erected barriers to any practice that fiddled with the traditional impunity and supremacy enjoyed by the authoritarian institutions.

Since the overthrow of Egypt’s first democratically elected president, Mohamed Morsi, on July 3, 2013, the Egyptian judiciary has operated under severe authoritarian strain. While the judiciary exercised limited checks over the executive bias, the executive interference has undermined all other state institutions. This helped to contain, at least marginally, the authoritarian coercion during the Mubarak regime and during the Muslim Brotherhood’s brief government.

A day after the coup against the elected MB government, Military General Abdel Fattah al-Sisi appointed the Chief of Supreme Constitutional Court, Adly Mansoor, as interim president. On July 5, 2013, Mansoor dissolved the Shura council, allowing the executive to manipulate the rule of law. This was the first judicial misconduct after the overthrow of Morsi. Morsi, no doubt, attempted to consolidate power – at least, misuse the people’s mandate. But Egypt enjoyed considerable space for dissent. On September 23, barely two months after the coup, the Cairo Court for Urgent Matters dissolved the Muslim Brotherhood and ordered for the confiscation of its assets. A month later, on November 24, the interim government issued the Demonstration Law, essentially criminalizing any organized form of dissent “at the slightest indication of disorder.” Such unlawful action axed whatever pluralism was left in the political chaos of Egypt.

After Sisi assumed power on June 8, 2014, the Egyptian judiciary became complacent to cumulative degrees of injustice and oppression. The judges that remained in service either voluntarily abided to authoritarian dictates or didn’t dare to raise their voice for judicial impartiality. Take for example the case of Judges for Egypt – a group of judges who challenged the authority of Sisi in overthrowing the elected president. In March 2016, the Supreme Disciplinary Board forcefully removed 47 judges who were part of a group being charged of being “pro-Islamist.” However, adherence to any political idea is the right of a citizen devoid of the professional position one holds. The explicit muzzling of this right and the conspicuous silence of the judiciary shows the extent of compromise Egypt’s judicial system has fallen for. It also explains Sisi’s authoritarian insecurity towards religio-political dissent.

But in the case of Egypt, religio-political discourse is essential – not only because it serves as a counterbalance to state structures, but also because it propagates the idea of equality and accountability, a notion that the ruler is not above the law. These are the basic premises that uphold human dignity. Thus, the intent of central actors of transition considerably determines how religion is allowed to shape the political discourse thereof. Egypt failed to strike a balance, partially given to the miscalculation given to the miscalculation of the street and partially because of ‘external factors,’ whose interests lie in authoritarian Egypt. Sisi and his regional allies understood that the Muslim Brotherhood is the only force capable of re-emerging and taking an independent decision or challenging the existing norm. Hence, the decision to outlaw the Muslim Brotherhood was to eliminate any possibility of opposition and to legitimize the authoritarian brutality against any form of dissent.

An explicit judicial disparity reigns the court proceedings. The Criminal Court sentenced Muslim Brotherhood supporters to death in mass in “unfair trials.” Such “grotesque parody of justice” further strengthened the institutionalized authoritarian coercion. Not all these death sentences were to be carried out, but the message went out very clear – no institution is above the authoritarian norm, not even the judiciary. These mass convictions and the uncensored enthusiasm of the Egyptian executive to crackdown upon any form of opposition shows the level of irrelevance the Egyptian judiciary enjoys.

The activists detained for opposing the government have been “unnecessarily” held for lengthy periods before their court proceedings. In October 2014, Sisi expanded the jurisdiction of military courts to “public and vital” facilities. This further manipulated the ambit of judicial impartiality; thousands of civilians were referred to military trials based on media reports; hundreds of “suspected” MB supporters were tried in mass and “unfair” judicial proceedings. On the other hand, members of the security forces, those affiliated to Hosni Mubarak, and the supporters of the Sisi regime were freed on bail.

The renewed Anti-Terrorism Law in August 2015 drew curtains over whatever miniscule space for dissent and the rule of law remained in Egypt. The law bestows the security forces with unrestricted impunity from persecution and penalizes the press for negating the official version of military attacks.

The renewed Anti-Terrorism Law in August 2015 drew curtains over whatever miniscule space for dissent and the rule of law remained in Egypt. The law bestows the security forces with unrestricted impunity from persecution and penalizes the press for negating the official version of military attacks. It sets a fine of up to $64000 for journalists who publish or spread news reports contradicting that of the state’s version. Such expansion of surveillance established the consolidation of an absolute authority within the executive. It also illustrated that legal reform is pursed in order to protect the regime rather than the citizens of Egypt.

Then came Law No 13 of 2017, which amended the Judicial Authority Law (Law No. 46 of 1972). This law stipulates that the President of Egypt must directly appoint the Chief Justice for each of the main four judicial bodies of the country. The silence of the Egyptian judiciary over this legislation explained that the judiciary preferred allying itself with the regime at the cost of institutional dignity.

The greatest low of the judiciary came in early December 2018, when a group of Egyptian lawyers filed a petition seeking to amend Article 140 of the constitution in order to grant Sisi a “lifetime” presidency. Though courts are yet to take any substantial decision on this petition, such endeavors explain another judicial misconduct aiding authoritarian sustenance in Egypt.

A just political system cannot be consolidated without a strong and impartial judiciary; thus, in the absence of a judicial system supportive of the principles of democracy, the rule of law will always remain subject to authoritarian manipulation.

Around 6 years after overthrowing the democratically elected government, Sisi managed to establish a brutal authority, but not a secure government. A just political system cannot be consolidated without a strong and impartial judiciary; thus, in the absence of a judicial system supportive of the principles of democracy, the rule of law will always remain subject to authoritarian manipulation.

Egypt’s judicial reform has neither been indigenous, nor comprehensive, nor locally supported. Any successful reform aims to restructure the social and political variables exogenous to the judiciary that promotes judicial independence and the superiority of the “rule of law.” This “decisional” independence requires, essentially, that judicial ranks are not staked in advance through the appointment or promotion of people that approve a particular set of ideas. Since Sisi assumed power, the Egyptian judiciary has served to legitimate and facilitate the authoritarian rule. Other than a feigned opposition against the transfer of two islands – Sanafir and Tiran – to Saudi Arabia in 2016, the Egyptian judiciary has served as a channel through which Sisi presses his oppression.

Iqbal Sonaullah is a doctoral candidate pursuing Middle East Studies at Jamia Millia Islamia, New Delhi, India. His research focusses on religio-political conflicts and transitional governance in the Middle East. He can be reached at [email protected]