Turkey views Malaysia as its gateway to Southeast and East Asia, and likewise Malaysia sees Turkey as its doorway into the West Asian and European regions. 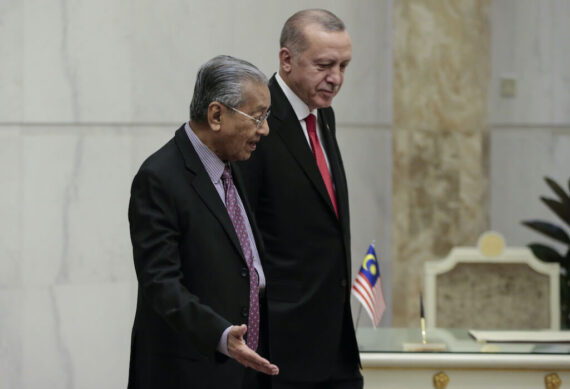 Whilst modern-day official diplomatic relations between Malaysia and Turkey were established in 1964, the ties between the two countries predate the modern era. Early relations can be traced back to the early sixteenth century when the Malay Sultanate of Malacca received the Ottoman help to fend off an attack by the Portuguese.

In the nineteenth century, a number of Malay states had close relations with the Ottoman Empire and notable amongst these was the personal ties between Sultan Abu Bakar of Johor and the Ottoman Sultan Abdülhamid II.

High-level visits between Malaysia and Turkey started in 1974 and since 2000 there has been undoubtedly greater interaction between the two states. Both countries are active members of the Organisation of Islamic Cooperation (OIC) and the D-8 Organization for Economic Cooperation. In 2014, relations between the two countries received yet another impetus when they were elevated to a strategic partnership.

Trade and investment between Turkey and Malaysia have been growing significantly especially since August 2015 when a Free Trade Agreement (FTA) between the states entered into force. For Turkey, the FTA with Malaysia was its first with a member state of the Association of Southeast Asian Nations (ASEAN) and its second in the Asia-Pacific region.

There is also the Turkey-Malaysia Business Council, which was created in 1995 to facilitate trade. In 2019 alone, total trade between Malaysia and Turkey was valued at US$2.2 billion, with the balance of trade in favor of the former.

Similarly, a few Malaysian companies too have invested in Turkey, notable amongst which is the Malaysian Airports Holding Berhad (MAHB) that not only operates but is, in fact, the largest shareholder in Istanbul’s Sabiha Gökçen International Airport, Turkey’s second busiest airport.

In terms of trade and investment, Turkey views Malaysia as its gateway to Southeast and East Asia, and likewise Malaysia sees Turkey as its doorway into the West Asian and European regions.

In the defense sector, Turkey is one of Malaysia’s main source of defense procurement, namely armored vehicles and military communications. During the visit by President Erdoğan to Malaysia in December 2019, a number of agreements between firms in the defense sector were signed.

President of Turkey Recep Tayyip Erdogan speaks during a round-table meeting on development and challenges as part of Kuala Lumpur Summit, in Kuala Lumpur, Malaysia on December 19, 2019. Photo by Metin Aktas, Anadolu Images

At the global level, both Malaysia and Turkey have been described as emerging middle powers often playing a pro-active role in international affairs, and especially on issues concerning the Islamic world.

A recent example of this role was when Malaysia convened the Kuala Lumpur Summit (KL Summit or Perdana Dialogue) with the theme “The Role of Development in Achieving National Security” in December 2019. The summit was attended by 450 delegates from 56 countries.

Notable among the attendees were Turkish President Erdogan, Iranian President Hassan Rouhani, and Sheikh Tamim bin Hamad al-Thani, the Emir of Qatar. The summit’s main agenda was to discuss problems besetting Muslim nations and undertake efforts to enhance unity in the Islamic world.

Notwithstanding the above, there were those who viewed the KL Summit as an attempt by Malaysia (and perhaps even Turkey) to create a new bloc in the Islamic world and provide an alternative to the Saudi-led OIC. The non-attendance of Saudi Arabia and even Pakistan (apparently at the insistence of the former) gave further credence to such views.

Compounded with the KL Summit were attempts by the Mahathir government to distance itself from Saudi Arabia, witnessed especially its decision to shut down the King Salman Center for International Peace (KSCIP) in Putrajaya in August 2018.

That said, the KL Summit was also very much in line with Malaysia’s new Foreign Policy Framework (FPF), launched in September 2019, which amongst others envisions a greater role for the country vis-à-vis the Islamic world.

However, barely three months after the summit, in late February 2020, the Mahathir government fell and since then little has been heard of the whole scheme. With Mahathir, the driving force behind the summit, out of power, it appears that the whole initiative to provide leadership and some form of direction in the Islamic world may have passed into oblivion.

With the onset of COVID-19, the new Malaysian government under Muhyiddin Yassin is fully preoccupied with domestic issues, with little attention given to foreign affairs. Equally important to note is a revelation in August 2020 by the Malaysian Foreign Minister, Hishammuddin Hussein, that Malaysia’s relations with Saudi Arabia since the new government came to power in March 2020 were back on track.

Hishamuddin Hussein also hinted that the Malaysian government may be reviving the KSCIP. All these developments clearly suggest that any initiative to revive the KL Summit with Malaysia playing the lead role is now unrealistic. While it may a bit too early to say whether Malaysia is moving closer to Saudi Arabia and distancing itself from Turkey, Iran, or even Qatar, based on the past, it is clear that pragmatism, the keystone of the country’s foreign policy, has always prevailed.

It is also highly unlikely that Malaysia will choose an isolationist path as it has never resorted to such a practice in the last 64 years of its foreign relations. As a trading nation, Malaysia has always ensured that it remained economically open and engaged with countries around the world.