The final meeting of the summit was interestingly broadcasted live so that the participating nations could raise their position publicly regarding the Idlib issue. It was a textbook example demonstrating competing discourses and strategies that frame the participating nations’ policy justification regarding the situation, not only in the Idlib region but also in Syria. 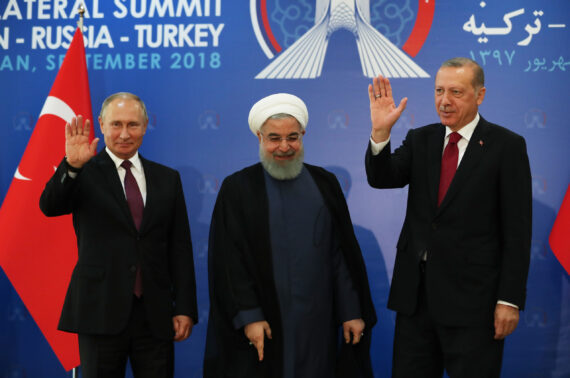 The Tehran summit on the future of the Idlib region is over, but the Idlib conundrum continues. The final meeting of the summit was interestingly broadcasted live so that the participating nations could raise their position publicly regarding the Idlib issue. It was a textbook example demonstrating competing discourses and strategies that frame the participating nations’ policy justification regarding the situation, not only in the Idlib region but also in Syria. President Erdogan encouraged Russia and Iran to accept a ceasefire in Idlib by saying that the people of the region hold many anxieties about the catastrophic consequences of the aerial bombing by Russia and Syria. He also mentioned that such an accord would be a victory of the summit.

However, Turkey’s cease-fire call was rejected by Russia and Iran. President Putin responded that “a cease-fire would be good.” Putin also mentioned that representatives of terrorist organizations have enough common sense to stop resistance and lay down their weapons. It was evident that President Erdogan underlined the importance of the cease-fire for the civilian people who might be targeted by Russian air bombardment.

Turkey’s priorities regarding Syria are still shaped by the same parameters as the final declaration of the summit shows. Territorial integrity has always been a central component of Ankara’s concerns regarding the Syrian crisis. President Erdogan underlined the terrorist threat by referring to the growing relationship between the U.S. and the PYD, which is the PKK’s Syrian branch. As it can also be understood through the Russian and Iranian leaders’ statements during the meeting, the U.S presence in the northern part of Syria is not welcomed as it undermines Syrian territorial integrity and Turkey’s national security. This concern was directly mentioned in the final statement of the meeting.

However, as compared to the previous Astana summits, in the final communique of the Tehran summit, Turkey, Russia, and Iran framed Syria concerning its official name: the Syrian Arab Republic (three times). This is an important signal to see Turkey’s “new” position regarding the Syrian regime, as Turkey always tends to prefer the Assad regime instead of using SAR.

In addition to the strong emphasis on the territorial integrity of Syria Turkey, Russia and Iran also revealed the “sovereignty” of the Syrian state in the final declaration of the meeting. From a personal point of view, it is unclear to me how Turkey locates the sovereignty of the Syrian state over the entire country which has been divided into many parts, in which Turkey also holds some part of it. More importantly, how Turkey understands the domestic dimension of the SAR’s sovereignty is not clear. This shows also how the PKK threat shapes Turkey’s understanding of the Syrian crisis. Therefore, the Tehran summit is interesting to understand whether Turkey’s perception of the solution of the Syrian crisis has shifted.

As the final statement of the meeting underlines, the UN is the most important component of Turkey’s perspective regarding the Syrian crisis. In the joint statement, Turkey, Russia, and Iran reiterated the importance of the UN and underlined that the Syria crisis could only reach a final resolution through a negotiated political process, not military means.

How the Idlib issue will be solved is still unclear as there was no mentioning of any mechanism to prevent the Russian and Syrian regime’s full-scale military assault on Idlib, but it seems that Turkey’s proposal was partly accepted by Russia and Iran. Before the summit, there were three scenarios: limited intervention against the radical groups such as HTS in particular places, full-scale military intervention and, finally, allowing Turkey to dissolve and disband the radical groups. At this stage, it is claimed that Turkey has given HTS a week deadline to respond to Turkey’s proposal of dissolving and disbanding the group. From news on the ground, the group will only accept the proposal if Russia and Syria give an end to their attacks.

The Tehran summit underlined the importance of the Astana summit and Turkey’s role in the resolution process of the Syrian crisis, but it also showed the difficulties for Turkey, particularly during the emergency time on the ground.