International Support for the New Israeli Government is Misguided

When this government collapses they will all turn to Benjamin Netanyahu who still holds the key to the stability of the Zionist state. 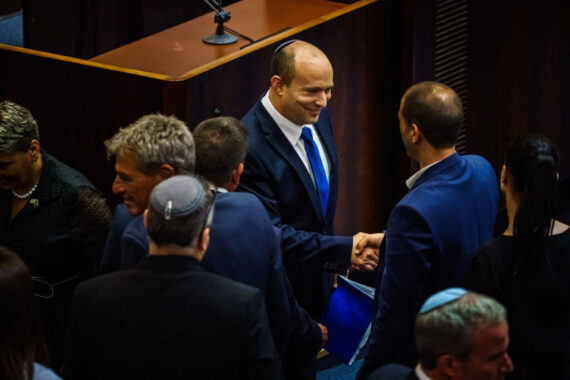 Israeli Prime Minister Naftali Bennett greets lawmakers after he completes his address to the Knesset, Israel's parliament, and before lawmakers gather to cast their vote of confidence to confirm the new coalition government which unseated Benjamin Netanyahu as Prime Minister in Jerusalem, Israel, Sunday, June 13, 2021. Photo by MARCUS YAM / LOS ANGELES TIMES via Getty Images.

The international support for the coalition which makes up the new government of Israel is misguided. It is based on an unrealistic expectation that a particular government will agree to bring about the “pie in the sky” myth of peace and prosperity and the Two State Solution. However, the Zionist apartheid system cannot be changed within the Zionist state and no solution to the injustice that plagues Palestine can be found within the Zionist system itself.

One important fact that is regularly overlooked by people who talk about Israel is that the State of Israel governs a majority of Palestinians, while either pretending they do not exist or treating them as though they are an insignificant minority population. Few if any of the government agencies within the Zionist state care for or care about the needs of the Palestinian citizens of the State. In fact, rarely do Palestinians and their vital interests get any attention or representation in state institutions.

Moreover, even when government agencies and news outlets that are run by the Zionists have an “expert on Arab affairs” it is rarely a Palestinian. And so, even though the new government coalition has been applauded as inclusive because it includes an Arab Islamic party, there should be no expectation that it will serve the needs of the Palestinians who are citizens of Israel.

Ra’am, or the United Arab List, which is the one Palestinian political party that is part of the Bennett coalition represents the Southern branch of the Islamic movement in Palestine. Ra’am is the one Arab political party that is included in the coalition and there are several indications that point to the dissatisfaction with Ra’am decision among Palestinian citizens of Israel.

The one umbrella organization that represents the Palestinian citizens of Israel is the High Follow-Up Committee for Arab Affairs. Its members include leaders of the various political and civic organizations within the 1948 Palestinian community. The decision taken by Ra’am to join the coalition led by Bennett caused some members of the Follow Up committee to call for its expulsion. According to a report in the Arabic publication Arab-48, Ahmed Khalifa of the Abna’a El-Balad movement, which initiated the move to expel Ra’am members, said:

Even within Ra’am there are disagreements regarding their decision to join the coalition. Knesset member Sa’id Elharoumi, whose abstention from the vote made it possible for the coalition to move forward, is now expressing serious concerns about the government and there are reports that he might resign.

Read: The Illusion of a Palestinian Kingmaker in Israel

It should be noted that The Southern faction of the Islamic Movement in Palestine is vastly different from the Northern branch which is headed by Sheikh Ra’ed Salah. The Northern Branch was outlawed by Israel for its stance against the apartheid state and Sheikh Ra’ed Salah is constantly persecuted and has been imprisoned by the Zionist state for his anti-Zionist activities.

The inclusion of Ra’am in the coalition should be viewed as exploitation of the Palestinian politicians which Zionists are willing tolerate in their midst. This so-called inclusion of Arabs in the coalition is a combination of Zionist racism and a lack of integrity of the members of Ra’am.

The Zionists have been displacing the indigenous people of the Naqab and giving their lands to Jewish settlers and the Israeli army for decades.

The Naqab region, which makes up the entire southern half of Palestine represents one of the serious fault lines within the new coalition. Ra’am supposedly represents the Palestinian citizens of the Southern region, which make up more than a quarter of a million people. The Center and Right Wing members of the coalition government wish to enforce what they call a “settlement” that will solve the “problem” of the Palestinian-Beduin towns and villages in the Naqab.

The Zionists have been displacing the indigenous people of the Naqab and giving their lands to Jewish settlers and the Israeli army for decades. The “settlement” of the Beduin problem means displacement and relocation into crowded, poverty stricken townships.

Read: Israeli Jewish Extremism and Radicalization in the 21st Century

The Palestinian Beduin want to remain on their ancestral lands and Ra’am, which is supposed to represents their interests is sitting in a government that is intent and indeed pressured by the public to act with decisiveness against the “lawless” Beduin. If history tells us anything it is that when Zionism clashes with the indigenous Palestinians, the sheer force of the Zionists always wins. One can be assured that unless an outside power intervenes, this time things will be no different.

The office of Jumaa Alzbarqa is in the southern city of Bir Al-Saba in the Naqab. He is a former member of the Israeli Knesset and he heads the office of the National Democratic Alliance, or Balad. Alzbarqa is from Laqiya, which is a small Palestinian Bedouin town near Bir Al-Saba.

When we met he told me about a conversation he had with another member of Knesset from the “leftists” Zionist party, Meretz. “I suggested that we co-sponsor a bill that would place a two-year moratorium on home demolitions in the Naqab,” Alzbarqa said. However, the Meretz member said he would allow the legitimizing of “illegal construction,” which is code for Palestinian construction.

Regardless of the negligent lack of housing for Palestinians citizens of Israel, Israeli authorities refuse Palestinians when they apply for building permits giving them no choice but to build without a permit. According to a report published in 2020 over 2,000 Palestinian homes are demolished in the Naqab each year.

While the current Israeli government presents itself as stable and well functioning, with its ministers constantly tweeting their accomplishments, it is only a matter of time before its faults create cracks that no amount of public relations can cover. They pretend that they can set aside their differences and work together for the good of the people.

However, Jewish only settlements are built non-stop, the ethnic cleansing of Jerusalem and the destruction of its Arab and Muslim monuments and even entire neighborhoods is proceeding at unprecedented speed and the pressure to annex area C is mounting. All of which points to a massive win for most extreme and violent elements within Israeli politics. All of this is done with the silent consent of the Zionist “Left.

When this government collapses they will all turn to Benjamin Netanyahu who still holds the key to the stability of the Zionist state. He will lead most of those who sit in today’s coalition government  together with his own block of Right Wing supporters and form a large national unity government with a broad, undefeatable mandate. 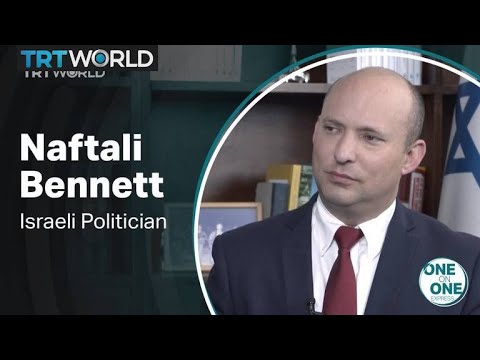 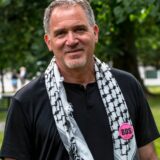