Iran’s proxies are not only active in the “Shia Crescent” stretching from Iran to the Mediterranean Sea, but they also have a presence on the Red Sea and the Gulf of Aden. 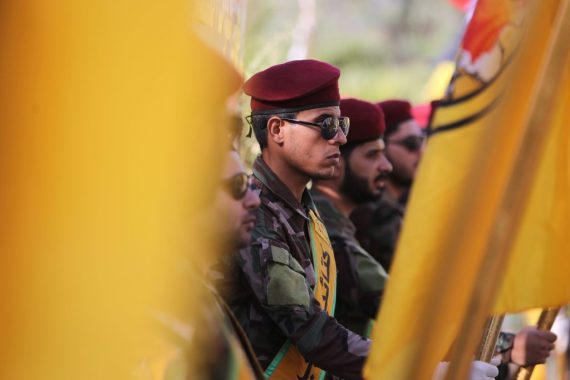 Members of the Iraqi Hezbollah Brigades, part of the Hashed al-Shaabi paramilitary units, carry flags during a ceremony in Baghdad. Photo by Ahmad Al-Rubaye, AFP via Getty Images

While there always seem to be efforts to rehabilitate Iran’s image at both a regional and international level, usually attempting to make Tehran appear to be the victim rather than the victimizer, few would be naïve enough to deny the fact that Iranian ambitions can actively be classified as being imperial in nature.

However, Tehran’s clergy-cum-politicians have played the game of empires in an intelligent and subtle manner, preferring to control vassal states by proxy rather than directly imposing their rule directly. In this way, Iran can claim to simply be “providing assistance” to the people of the region that it is now actively terrorizing.

Through a strategy of clever and careful outsourcing of war to ideologically loyal militants across the Middle East, Iran has managed to carve for itself a sphere of influence that threatens peace and security in the region and beyond.

War on the cheap

As previously stated, Iran does not use direct, conventional means of control and military power projection as it knows it can be a costly endeavor, both in blood and treasure.

The last time Iran was involved in a conventional conflict was against Iraq between 1980 and 1988. In almost eight full years of grinding war, Iran was left militarily and economically broken, politically isolated, and the founder of the Islamic Republic, Ayatollah Ruhollah Khomeini, famously stated that signing a ceasefire with Iraq was like drinking from a poisoned chalice.

The Iranians learnt the lesson of the war well – no amount of Shia Islamist rhetoric was able to lead the Iranian military and the Islamic Revolutionary Guard Corps (IRGC) to victory. After the butcher’s bill of the Iran-Iraq War, the Shia revolutionaries changed tack and began a new strategy of harboring Shia Islamist groups loyal to them, waiting for the right opportunity to install them in positions of power.

Perhaps the most famous of these groups was actually incubated during the war with Iraq and is now Iran’s leading proxy in the region. Lebanon’s Hezbollah militia, now led by Hassan Nasrallah, was created, financed, and trained by the IRGC in 1985, ostensibly to resist the Israeli occupation of Lebanon. In cooperation with their Syrian ally in the Assad regime, Iran dispatched hundreds of IRGC operatives to train Lebanese Shia irregulars in guerrilla warfare.

Fast-forward to the present day, and Hezbollah is the most powerful military and political faction in Lebanon, controlling several ministries, the main airport in Beirut, and even the country’s primary seaport which was the site of a devastating explosion in 2020, which has led to Hezbollah threatening the judge charged with investigating the tragedy. Hezbollah makes no effort to disguise the fact it is directed by Iran, with Nasrallah once famously saying: “Hezbollah is Iran, and Iran is Hezbollah.”

Hezbollah has been seen as a template to emulate across other theaters Iran is involved in. Iraq, for example, is filled with a plethora of Shia jihadist organizations whose banners and flags all resemble that of the Lebanese group’s iconic hand clutching a Kalashnikov assault rifle. Many of these militias fight under the banner of the Hashd al-Shaabi, known as the Popular Mobilization Forces (PMF) in English.

Unlike Hezbollah, however, the PMF is legally considered as a separate branch of the Iraqi armed forces. They also have politicians in parliament and in cabinet positions, recently winning 17 seats in parliamentary elections held earlier this month. In this way, it has been argued that the PMF is being groomed to become the Iraqi version of the IRGC itself, a kind of praetorian guard that will ensure the new post-2003 order that places Shia Islamists loyal to Tehran at the top of the food chain is not threatened or destabilized.

To this end, the PMF have executed Iran’s bidding with bloody enthusiasm. Not only are they implicated in war crimes and crimes against humanity during their campaigns against Daesh between 2014 and 2017 against innocent Sunni Arabs, but they have also recently targeted largely Shia Arab pro-democracy activists, killing at least 600 since 2019, and are actively involved in fighting in neighboring Syria where they have supported Bashar al-Assad’s regime.

But Iran’s proxies are not only active in the traditional “Shia Crescent” stretching from Iran to the Mediterranean Sea, but they also have a presence on the Red Sea and the Gulf of Aden. The Yemeni Houthi militias, while not as intricately linked to Iran as Hezbollah in Lebanon or the PMF in Iraq, are in the modern day inextricably linked to Tehran’s regional ambitions.

The Yemeni Shia group not only uses similar propaganda by calling for death to America, Israel, and publicly cursing all Jews in what can only be described as anti-Semitic hatred, but has received extensive Iranian financial and military support. This has included the provision of drone technology that the Houthis have used to harass Saudi Arabia and attack its strategically vital energy sector.

The modern Iranian empire is ruled by proxy

These groups are not simply allies, but they are direct proxies of Tehran and an extension of the Iranian leadership’s strategic ambitions.

In the Houthi case, Yemen has been used as a quagmire to bleed Saudi and its allies in an unwinnable war, while simultaneously controlling the capital city and commanding a dangerous position over vital naval shipping routes. In the Iraqi and Lebanese cases, Iranian rule by proxy is so obvious and is seen as existentially vital to Iran’s strategic ambition to dominate the Middle East, far more so than their presence in Yemen.

It is no wonder, then, that senior Iranian officials occasionally allow the mask to slip and openly gloat about their new empire and how they control four Arab capitals: Baghdad, Damascus, Beirut, and Sanaa. They have also made their ambitions of a wider Shia revolutionary uprising clear, and half a decade ago announced the formation of a “Shia Liberation Army”.

Without a regional and international cooperative framework to contain Iran’s ambitions and to roll back its gains in Iraq, Syria, and Lebanon especially, with Yemen of secondary importance, then Tehran will only consolidate its control over these territories that are largely populated by Sunni Arabs. This will be a recipe for disaster as majorities rarely accept being ruled minorities, and therefore there is a significant risk of the outbreak of a regional sectarian war, the results of which will be devastating and must be avoided at all costs.