Why Iran Is Concerned with Taliban 2.0

Above all, the gravest challenge to Islamist Iran will be Islamist Afghanistan. 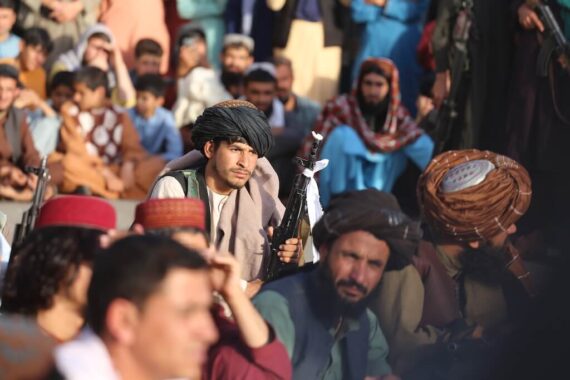 Mayor of Herat and a number of loval Taliban officials attend the show-sports ceremony after the complete withdrawal of US and NATO forces at Takht-e-Safar Park in Herat, Afghanistan on October 02, 2021. Photo by Stringer via Anadolu Agency.

Any political change in Afghanistan can trigger broader geopolitical transformations in south Central and West Asia. Thus, the Taliban’s return in Afghanistan has disturbed many geopolitical calculations. Iran had played a vital role in overthrowing the Taliban in 2001 by sharing key intelligence input with the United States and showing its full support for the Northern Alliance, the main group opposing the Taliban. However, Iran is now facing a serious dilemma.

In the past, Iran competed with Pakistan by providing support to the Taliban’s opponents in Afghanistan during the 1990s. In particular, the Iranian regime supported the Shia Muslim minority’s participation of the larger anti-Taliban Northern Alliance. Iranian assistance was the bedrock of the Northern Alliance’s resistance to the Taliban. Other nations like Russia, India, and Turkey also joined Iran in backing the alliance.

The visit of Faiz Hameed, the chief of Pakistan’s ISI (Inter-Services Intelligence), to Kabul to help finalize the composition of the interim government setup under the Taliban was not taken lightly by Iran. Iran’s foreign ministry statement criticizing Pakistan and the anti-Pakistan protests that followed in Tehran indicate that the nascent Taliban-Iran bonhomie, which was generated after Tehran recently participated in some conciliatory negotiations with the Taliban, is not going to last long.

When the Taliban were busy taking control of the last Northern Alliance stronghold, the Panjshir Valley, the Iranian regime’s mouthpiece Tehran Times cited a United States Central Command (CENTCOM) source, which told FOX news that the Pakistan military was assisting the Taliban offensive in Panjshir. The report said that Pakistani assistance included 27 choppers loaded with Pakistani Special Forces, and that they were backed by Pakistani drones. Interestingly, in 2019, the Iranian Parliament had voted to put CENTCOM on its list of terrorist groups.

Iran’s former conservative president Mahmoud Ahmadinejad, in an interview on August 3, 2021 with WION, an Indian news channel, heavily criticized Pakistan. He alleged, “Pakistani officers directly got involved in the war for Panjshir. I have a piece of advice for Pakistan. What happened in Afghanistan will soon expand and engulf Pakistan too. The countries which supported and designed this plot will face the consequences.”

Ahmadinejad called the Taliban’s rise to power in Afghanistan an international anti-human “satanic plot” by a few world powers – referring to the U.S. and the West in general. He further stated that the entire Taliban project is a violation of international law. According to him, the U.S., Russia, China, and Pakistan helped the Taliban. Ahmadinejad’s choice of an Indian media outlet to speak against Pakistan demonstrates Iran’s frustration about not getting a share in post-NATO Afghanistan as it had hoped.

Iran reacted with a sharp criticism and claimed that this would pose a danger to regional stability. In response, Iran held its own military drill on the Azerbaijan border on September 28. Now, Iran has worries that Afghanistan might join the “Three Brothers” in the future.

In fact, most of Iran’s harsh criticism in recent weeks has been directed at Pakistan and not against the Taliban. The selective attacks on Pakistan’s role in Afghanistan signify Iran’s displeasure with Pakistan’s growing profile both in geopolitics and diplomacy resulting from the Taliban takeover in Kabul.

Iran’s support of the overthrowing of the Taliban in Kabul in 2001 was due to its ideological rivalry with the then Taliban regime in Afghanistan. Iran also wanted to ensure that U.S. forces could not operate against it from Afghan soil. Tehran tried its best to help establish a friendly government in Afghanistan and avoided any semblance of a coalition with other regional actors, especially Pakistan and its arch-rival Saudi Arabia.

From 2017 onwards, Iran diverged from its initial anti-Taliban policy and started developing cordial ties with them in order to maintain pressure on the U.S. military forces on Iran’s borders, and to gain leverage against the U.S. forces and deter their efforts to intimidate their country.

It is true that the Taliban seem to have evolved from their first stint in power and their relations with Iran have improved markedly. Iran’s embassy remained functional after the Taliban takeover of Kabul on August 15. Iran is now among the few countries that the Taliban invited to their government inauguration ceremony.

Unlike Iran, the Taliban in Afghanistan have directly defeated the U.S. in an open battle and emerged victorious. Iran’s anti-American rhetoric perhaps lost some of its competitive sheen in the Muslim world. Above all, the gravest challenge to Islamist Iran will be Islamist Afghanistan. A Sunni emirate under the Taliban will posit itself as an ideological rival to the Shia imamate in Iran.

The Chabahar Port in Iran, in which India had made considerable investments, will no longer be an alternative seaport to Pakistan’s Gwadar Port, built and controlled by the Chinese, as it was anticipated by Iranians some years ago. It was supposed to provide passage to Afghanistan by bypassing Pakistan. However, the current situation in Afghanistan has changed the game. The Taliban leadership seems more interested in utilizing the infrastructure built under the China-Pakistan Economic Corridor (CPEC) projects in western Pakistan to link up the Afghan infrastructure network with the CPEC. This decision will definitely not sit well with the Iranians.

The Taliban have openly announced their preference for the CPEC extension to Afghanistan, which is both economically and logistically better from Afghanistan’s point of view. Kabul is very close to Peshawar, Kandahar is very close to Quetta. Herat remains the only major Afghan city close to Iran.

Iran’s endorsement of the Taliban, which started with the 2015 visit of a Taliban delegation, actually emanated from Tehran’s political compulsion as none of Afghanistan’s neighbors was willing to antagonize the Taliban by supporting the militias of the erstwhile Northern Alliance. Iran’s outcry started only after the fall of the Panjshir Valley.

The Taliban will make sure that powerful warlords will have no political future in Afghanistan. With this, Iran will lose its proxies on the ground, especially the Shia Hazara militia in Afghanistan. Unlike the period of the previous Kabul regime, when patrons of Afghan warlords enjoyed a huge sway in the government, the Taliban will not allow warlordism and will most certainly disarm all the militias. There is also the question of the existence of the Iranian-backed Fatemiyoun Brigade before the Tehran rulers. The Fatemiyoun Brigade mainly comprises the Hazara Shia minority of Afghanistan. Hazaras currently make up around 10% of Afghanistan’s total population of 38 million. It is highly possible that the Taliban will not tolerate the recruitment of their Hazara population for Iran’s proxy wars.

Although there is no immediate and direct threat to Iran from the Taliban rule in Afghanistan, the Taliban takeover of Kabul has in fact strengthened Pakistan’s geopolitical ascendance, which in turn will pose a direct challenge to Iran’s influence in many adjoining regions. New Afghanistan will tilt the balance of power in Pakistan’s favor and it will deepen Iran’s already tumultuous relations with Pakistan.