To govern, the Taliban need legitimacy from the people, international recognition, and monetary resources. 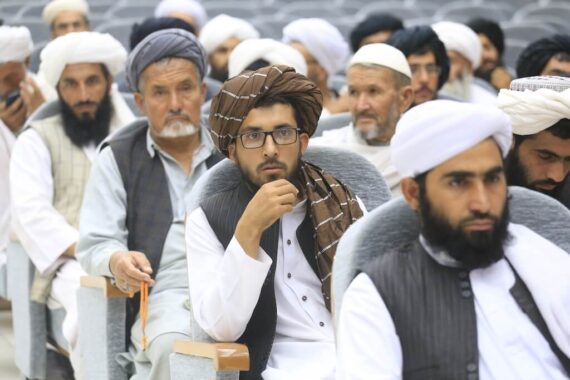 Taliban hold a meeting with clerics in the hall of Maulana Jalaluddin Mohammad Balkhi in Herat province, Afghanistan on September 21, 2021. Photo by Stringer via Anadolu Agency.

Sources reported that Mullah Abdul Ghani Baradar was badly wounded in gunfire in Kabul over a disagreement among the Taliban leaders on how to resolve the Panjshir situation and government structure. The Taliban later denied that Baradar was wounded. Nevertheless, a source asserted that the Deputy Afghan PM Mullah Baradar is upset with the current face of the Taliban government.

The Taliban formed the government and appointed ministers after 20 years of fighting the U.S. and the Afghan government. Last month, the Taliban swiftly reached the capital and took over 33 of the 34 provinces in the country without major impediment. However, despite a massive aerial and ground encroachment on Panjshir, the resistance against the Taliban is still alive.

The Taliban are going through a transition from guerilla fighting to governance, bringing order to a multiethnic nation, and adjusting within the contemporary world. War and governance are two distinct issues. Now that the Taliban must govern, they face numerous challenges.

Governance: No single institution is functional

The Taliban had vowed that the group would form an inclusive government where all political parties, ethnicities, and classes see themselves in the government. Nevertheless, last week, they announced their first cabinet where only their leaders and commanders are appointed. The announcement faced massive criticism since it did not include a single woman or any Hazara ethnics, whereas Afghanistan is home to millions of Hazaras.

The appointed ministers lack governmental experience, and no minister has a PhD, master’s, or undergraduate degree, while all the cabinet members, including its chief minister, are religious scholars. In addition, many of the skillful, well-educated, and experienced Afghans have already left Afghanistan and those who remain are striving to get out.

Human rights and the Taliban

The Taliban’s fastidious form of Islam has been met with deep concerns by human rights organizations and movements across the globe. In a democratic and liberal society, the Taliban apply an interpretation of Sharia law where music is banned, and women’s rights to education and work are limited or completely halted. This decision has brought the group face-to-face with criticism by the international community.

For the past 20 years, women enjoyed access to education and work – rights that they are now denied to them by the Taliban. Concurrently, Afghans have been posting on social media videos of Taliban flogging women on the streets and searching houses for affiliates of the previous government.

Such actions have led to women’s demonstrations in Kabul and a massive protest in Kandahar against the Taliban. The social media campaigns and attacks on them have discomforted the Taliban to the extent that the group couldn’t fully comprehend and mark its victory. Afghans and their sympathizers across the globe have been actively engaged in publicizing the Taliban’s actions. Relying on social media, the global media formulate news and update policy-makers across the world about the Taliban. The Taliban are monitored by ordinary Afghans’ cell phones, who record their moves and in one click inform the entire world.

The Taliban and the economy

The United Nations Secretary-General António Guterres warned that Afghanistan faces a dramatic humanitarian crisis. The warning comes after international aid to Afghanistan has dried up, businesses are closed, investments have fled, unemployment has reached an all-time high, and poverty is rife. The protracted conflict and drought have exacerbated the humanitarian catastrophe. The UN reports that in 2021 alone, over half a million people have been internally displaced in Afghanistan.

The Taliban now manage revenue sources such as customs; however, in the absence of trades, investments, and businesses, the customs do not generate enough revenue. In fact, they do not even cover the daily expenses of the Taliban’s sustenance and fuel expenses. The Taliban also do not have access to the $9.5 billion in assets belonging to Afghanistan’s central bank, which have been frozen by the United States. The country’s economic situation and the humanitarian catastrophe are causing genuine hardship to the Taliban.

In Afghanistan, Taliban fighters were not the only security threat to the country. Among others, the fighters of the Islamic State in Khorasan (ISIS-K) have conducted numerous attacks and have fought hard against the Taliban. After the fall of Kabul, ISIS-K published a commentary where the group accused the Taliban of betraying Jihadists with the peace agreement with the U.S., and the group vowed to continue fighting the Taliban. Since the Taliban took over the capital, ISIS-K has carried out deadly attacks.

Among others, the fighters of the Islamic State in Khorasan (ISIS-K) have conducted numerous attacks and have fought hard against the Taliban.

Last month, ISIS-K fired rockets in Kabul followed by a statement which read, “By the grace of God Almighty, the soldiers of the Caliphate targeted Kabul International Airport with six Katyusha rockets.” In another incident, the group carried out twin suicide attacks against a crowd outside of the Kabul airport killing 85 people, including 13 Americans. It is estimated that the group has 4,000 to 5,000 fighters in Afghanistan. In an interview with CNN, Abdul Munir, a commander of the so-called Islamic State stated that he leads 600 fighters, including Indians, Pakistanis, and Central Asians. He added, “When the foreigners and the people of the world leave Afghanistan, we can resume our operations.”

Apart from the so-called Islamic State, the National Resistance Front of Afghanistan (NRF) is another headache for the Taliban. Even though the Taliban fighters have seized the center of Panjshir, the NRF fights from the mountains of Panjshir. The majority of the commanders of the Northern Alliance (officially the United Islamic National Front for the Salvation of Afghanistan), including Marshal Abdul Rashid Dostum, Atta Mohammad Noor, and Hazara leaders have fought heavily against the Taliban.

International isolation and the Taliban

The previous Afghan government was recognized worldwide; however, despite the Taliban having appointed their cabinet and chief minister, no country is amenable to recognizing their government – even the countries that have supported them in fighting the U.S. Despite Pakistan’s support for the Taliban, the country has not recognized their government. Iran and Russia, once amicable to the Taliban, now move in a different direction. Tehran slammed attacks on Panjshir Valley and urged the Taliban to honor commitments. It also slammed Pakistan’s aerial attacks on Panjshir and said it will probe into the attacks.

On the other side, Moscow has sent its military to Tajikistan to block potential threats from Afghanistan. The Taliban also face international isolation. The European Union had already threatened the Taliban with isolation if they seize power. In addition, Germany’s foreign minister stated, “A transitional government that does not include other groups is not the signal for more international cooperation and stability in the country.”

Should the Taliban not dramatically change their ideas and actions, the group might face extinction as it cannot govern a complicated country in a complicated region. To govern, the Taliban need legitimacy from the people, international recognition, and monetary resources. Meanwhile, they halted political dialogue and encroached on the National Resistance Front in Panjshir. Yet, a good lesson to be learned in Afghanistan today is that when the Taliban were toppled in 2001, they soon resurfaced in Bahramcha in the Helmand Province.

Should the Taliban not genuinely engage with the world and Afghan parties on the issues of concern, there are risks of facing international sanctions and of the emergence of national confrontations.