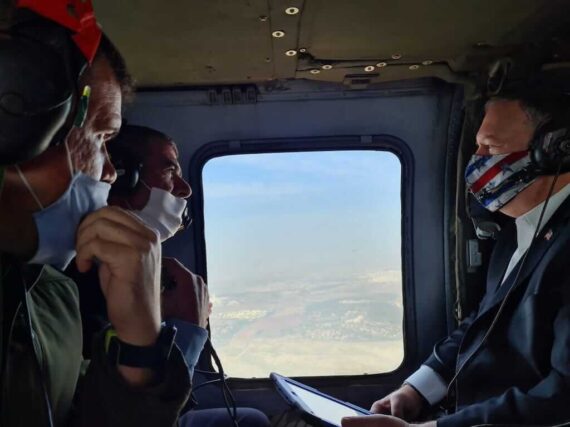 There are a few weeks to January 20, 2021, the day that U.S. president-elect Joe Biden is supposed to assume office as the new president of the United States. However, Donald Trump and his administration refuse to concede while in the meantime U.S. Secretary of State Mike Pompeo is taking irreversible steps that can change the long-standing U.S. foreign policy in the Middle East, specifically in relation to Israel/Palestine.

The U.S. foreign policy on Israel/Palestine has been based on supporting a two-state solution, in other words a Palestinian state along the 1967 borders, next to Israel. The successive administrations of the United States, on a rhetorical level, have been critical of Israeli settlement activities in the West Bank.

In December 2016, and after Israel refused to freeze settlement construction, the Obama administration and its secretary of state, John Kerry, lashed out against Israel and Netanyahu, abstaining from vetoing a UN Security Council Resolution that condemns Israeli settlements as a flagrant violation of international law.

Kerry directed what is considered to be the harshest U.S. criticism of the Netanyahu government, which he dubbed as “the most right-wing in Israeli history, with an agenda driven by the most extreme elements.” This rhetoric, unusual between the two governments, took place weeks prior to the Trump administration’s formation, with Israel calling the U.S. move “shameful” and expressing readiness to work with the Trump administration.

The Trump administration has adopted pro-Israeli policies unseen in the history of United States, practically scraping the two-state solution, which has been advocated by the U.S. for a long time.

Although a $3.8 billion annual aid package was approved during the Obama administration in the form of military aid to Israel for ten years, Israel was eager to get more. Keeping the promise that he made during his electoral campaign, on May 14, 2017, Trump decided to issue an official decree for the transfer of the U.S. embassy to Jerusalem.

Since 1995 when the U.S. Congress voted in favor of a resolution to do make this move, all U.S. presidents, whether Republican or Democrat, signed a decree postponing this move.

The Trump administration has adopted pro-Israeli policies unseen in the history of United States, practically scraping the two-state solution, which has been advocated by the U.S. for a long time.

The Trump administration decided to cut off U.S. aid to UNRWA, the UN refugee agency in Palestine, in line with Israel’s view of the UN agency as a symbol of the unresolved issue of Palestinian refugees that has to go. The UN General Assembly has adopted 194 resolutions that call for the return of Palestinian refugees to their homes and towns in what is today Israel and for their compensation, which Israel still refuses to implement.

In another “last days” diplomacy move, the U.S. Secretary of State Mike Pompeo visited a winery in the Psagot settlement in the West Bank, built on confiscated land of the Palestinian city of Al-Bireh. The move aimed to legitimize Israeli goods produced in settlements in the West Bank and to treat them on equal footing with other Israeli products, labelling any product made in any area where Israel practices authority as “Made in Israel.”

The Biden administration is unlikely to relocate the U.S. embassy to Tel Aviv, fearing this would resonate as “anti-Israeli,” or to withdraw U.S. recognition of the Golan Heights as under Israeli sovereignty.

Furthermore, reports have emerged that the U.S. Department of State is planning to label human rights organizations such as Amnesty International and Human Rights Watch as anti-Semitic, thus depriving them of U.S. federal funds. This move is an implementation of Israel’s vision of groups that are critical of its policies as being “anti-Semitic,” and will have long-term effects (and might see the targeting of other U.S groups that criticize the actions of the Israeli state.

As a last gift of the Trump administration to Netanyahu, Jonathan Pollard who spied on the U.S. and gave thousands of secret documents to Israel, was granted a “full pardon” and can now travel to Israel that gave him Israeli citizenship while he was in prison.

The Biden administration will likely resume U.S. funds for UNRWA and the Palestinian Authority (PA), and re-open the PLO representation office in Washington, D.C. However, it is unlikely to relocate the U.S. embassy to Tel Aviv, fearing this would resonate as “anti-Israeli,” or to withdraw U.S. recognition of the Golan Heights as under Israeli sovereignty.

Under promises of resuming peace talks under the Biden administration, the Palestinian Authority will abandon its plans of reconciliation with Hamas, which is on the U.S. list of Foreign Terrorist Organizations.

The PA has already resumed relations with Israel following a six-month freeze after receiving a letter from Major General Kamal Abu Rokon, the head of the Israeli-run Civil Affairs Department, stressing that Israel will continue to abide by signed agreements, despite the fact that Israel announced plans to build more housing units in East Jerusalem during the same period.

It appears that the Biden administration will be less critical of Israel than the Obama administration was, lest it be dubbed “anti-Israeli.” And for this reason, at the very minimum, Israel will negotiate a more comprehensive military aid package with Biden.

However, a Biden presidency will provide Palestinians with better opportunities than a Trump second-term would have. The reports of assigning Palestinian-American Reema Dodin as the deputy director of the White House Office of Legislative Affairs give hope to the Palestinians. Nonetheless, the Palestinians felt abandoned by the Trump administration and will only act with caution to avoid yet another disappointment.

The Israeli lobby in Washington, D.C. already started waging smearing campaigns against Dodin, as they have done with other U.S. politicians who are supportive of Palestinian rights, such as Ilhan Omar and Rashida Tlaib. This reveals that it is still hard for Palestinians to make a breakthrough in shifting U.S. foreign policy in the Middle East.

At the same time, the fact that an increasing number of politicians of Palestinian origin and politicians that are supportive of Palestinian rights are making it into U.S. decision-making circles gives Palestinians hope that the discourse could change in their favor. Meanwhile, Netanyahu’s right-wing government will continue to do its best to make Israel the biggest winner under Biden, exactly as it did under Trump.