How Will Antony Blinken Handle US Foreign Policy on Syria, Turkey and Yemen?

Since Blinken has never held elected office, it is difficult to discern to what extent his public pronouncements on policy issues reflect his personal views and to what extent they serve as faithful barometers of the elected officials he advises. Most likely, they reflect a combination of the two. 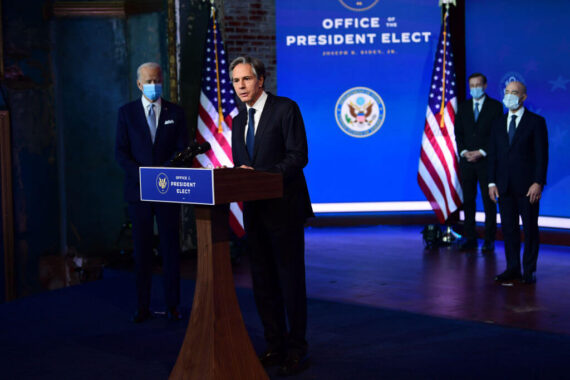 Secretary of State nominee Antony Blinken speaks after being introduced by President-elect Joe Biden as he introduces key foreign policy and national security nominees and appointments at the Queen Theatre on November 24, 2020 in Wilmington, Delaware. Photo by Mark Makela, Getty Images

In between those assignments, for more than a decade, Blinken served as a key foreign policy adviser to Biden. Blinken served as the Democratic Staff Director of the influential Senate Foreign Relations Committee from 2002 to 2008, when Biden was alternatively chair and ranking member of the committee.

Before being confirmed as Deputy Secretary of State in 2014 during the Obama administration, Blinken served as Vice President Biden’s National Security Adviser.

It is difficult to discern to what extent Blinken’s public pronouncements on policy issues reflect his personal views and to what extent they serve as faithful barometers of the elected officials he advises.

Since Blinken has never held elected office, it is difficult to discern to what extent his public pronouncements on policy issues reflect his personal views and to what extent they serve as faithful barometers of the elected officials he advises. Most likely, they reflect a combination of the two.

Blinken’s decades of experience in top Democratic foreign policy circles brings with it assets and liabilities. On the plus side, he understands the bureaucratic workings of the State Department and the value of traditional alliances, the lack of which demoralized many career diplomats during the Trump administration.

On the negative side, he also comes to the position saddled with the calamitous foreign policy decisions of the elected officials he advised, most notably Biden’s leading role in providing Democratic support as chair of the Senate Foreign Relations Committee to authorize the Bush administration’s illegal war on Iraq.

Although Biden eventually expressed regret for this mistake, as late as this year, Blinken was still deceptively referring to the authorization for use of force against Iraq as a “vote for tough diplomacy.”

More recently, as a senior foreign policy figure in the Obama administration, Blinken shares in the blame for the president’s incoherent, piecemeal, and unprincipled response to the Arab Spring, which consisted of a combination of questionably unauthorized uses of force against long-time adversaries and a studied indifference to the repression inflicted by brutal allies against their citizens.

If Blinken is confirmed for the position by the Senate–and there is every reason to believe that his centrist foreign policy worldview and his frequently resorted to faith in the use of force will endear him to Senate Republicans, ensuring a quick and smooth confirmation with bipartisan support–what would his stewardship of the State Department mean for US policy toward three key countries in the Middle East?

US Deputy Secretary of State Antony Blinken (R) is informed by an official as he inspects interior parts of the Grand National Assembly of Turkey (TBMM) which were damaged during the July 15 failed military coup attempt in Ankara, Turkey on September 27, 2016. Anadolu Images

The nearly decade-long civil war in Syria has generated the largest displaced persons crisis in the world, with more than 6.6 million refugees and 6.1 million internally displaced people.

The Obama administration “pursued a policy of calculated dithering in Syria, just agonizing over the choices until they no longer existed,” according to Emile Hokayem, a senior fellow at the International Institute for Strategic Studies.

This muddled policy, which consisted of laying down “red lines” against the use of chemical weapons that were crossed by Assad without consequence, an ineffectual $1 billion program run by the CIA to arm and train Syrian rebels, and direct armed intervention against the Islamic State and other groups, helped the Assad regime reassert control over much of the country and made a mockery of Obama’s early call for regime change.

In 2017, Blinken praised the Trump administration for bombing Syrian airfields in response to the Assad regime’s use of chemical weapons against civilians and called for “smart diplomacy” to “move toward a negotiated transition of power,” a goal which he admitted “eluded the Obama administration.”

Earlier this year, Blinken expressed greater remorse for the Obama administration’s “failures” in Syria. “The last administration has to acknowledge that we failed, not for want of trying, but we failed. We failed to prevent a horrific loss of life. We failed to prevent massive displacement of people internally in Syria and, of course, externally as refugees. And it’s something that I will take with me for the rest of my days.”

The Biden campaign took a swipe at the Trump administration for having “fallen short on U.S. policy in Syria.” The same could be said about Biden and Blinken’s roles in policy formulation on Syria during the Obama administration. Biden’s vague campaign pledge to “help shape a political settlement to give more Syrians a voice” portends a similarly fuzzy policy.

The ongoing civil war in Syria has had dramatic spillover effects in Turkey, which hosts the largest number of Syrian refugees–more than 3.6 million registered with temporary protected status.

Turkish President Recep Tayyip Erdoğan has been a consistent opponent of the Assad regime since the civil war erupted and Turkey has frequently intervened militarily in Syria to protect its interests. Since 2016 it has maintained a military zone of control in northern Syria.

The Trump administration abruptly decided in October 2019 to withdraw US troops from the area and Turkey went on an offensive against the Syrian Democratic Forces (SDF).

Turkey claims that Kurdish elements in the SDF have ties to the PKK, an organization designated by Turkey, EU and the US as a terrorist organization. Trump’s withdrawal of troops and support for the SDF removed one of the primary points of friction that existed between the US and Turkey over Syria policy during the Obama administration.

Despite this policy difference, Blinken in particular placed great value on US relations with Turkey and strongly backed the country against an attempted coup in July 2016.

Speaking to an annual conference on US-Turkey relations later that year, Blinken condemned the coup attempt as a “deplorable affront to the Turkish people. By taking to the streets where they faced down tanks and evaded helicopters, ordinary citizens came to the defense of their nation and sent a powerful message to the world.”

He stated that “Turkey has no greater friend than the United States. As a long-time ally, the United States remain [sic] steadfast in our support of Turkey’s democratically-elected government and institutions.” Recognizing Turkey as a valuable NATO ally, Blinken acknowledged “our share of disagreements, but we discuss them openly, directly, and truthfully as friends and partners do.”

With the Biden administration unlikely to reintroduce substantial numbers of US troops to Syria to augment the token remaining forces, Blinken is likely to preside over a fairly smooth US relationship with Turkey.

Yemen faces the worst humanitarian crisis in the world according to UNICEF, a condition brought about in large part by the devastating Saudi Arabia- and UAE-led war. The Obama administration provided critical support for this war, including intelligence, logistics, and mid-air refueling, according to Human Rights Watch.

While the Trump administration curtailed some of the most egregious direct acts of military support for this war, it also sought to greatly enhance the flows of weapons to these countries.

Concerted congressional opposition to this policy began during the Obama administration and intensified under the Trump administration, culminating in the first-ever congressional invocation of the War Power Resolution in 2019, demanding an end to US participation in the war. Trump vetoed the historic resolution.

According to Daniel Larison, writing in Responsible Statecraft, “The war on Yemen is an important example of how Blinken started off with a terrible position, but seems to have learned from that mistake.”

Blinken signed an open letter with other former Obama administration officials in 2018 reversing his previous support for the war. According to Larison, Yemen will serve as a litmus test “to determine whether Biden and Blinken can make a clean break with the errors of both the Obama and Trump administrations.”