Israel Will Not Grant Palestinians a State: What Should the PLO Do?

What is the point behind sticking to Oslo, which has made Palestinians more divided and has deprived Palestinians of representation? 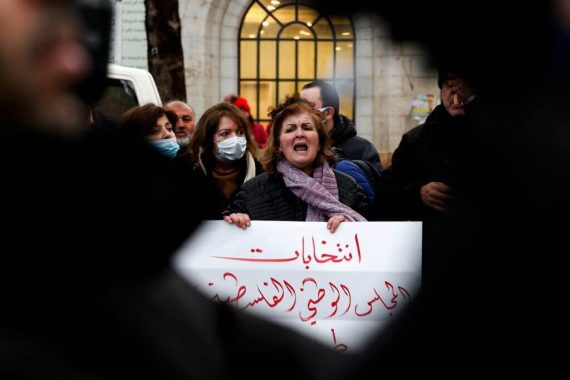 Palestinians lift placards as they protest the meeting of the Palestine Liberation Organization's (PLO) Central Committee, in Ramallah, in the Israel-occupied West Bank, on February 6, 2022. Photo by Abbas Momani, AFP via Getty Images

All facts on the ground in Palestine today speak of one reality: the Palestinian Authority (PA), which was created by the Palestine Liberation Organization (PLO), has practically swallowed up its umbrella organization, making it increasingly insignificant despite claims by PA officials that the PLO is still the sole representatives of the Palestinian people.

The Central Committee of the Palestine Liberation Organization (PLO) is headed by Mahmoud Abbas, 86, and consists of 141 members, who are supposed to represent all Palestinian parties and bodies in the organization, including grassroots groups. On February 8, 2022, the committee voted to appoint Rawhi Fattouh, 73, the former speaker of the Palestinian Legislative Council (PLC), as a member of the PLO’s Executive Committee and the new chairman of the Palestinian National Council (PNC), the legislative body of the PLO, replacing Salim Zanoun, 88, who had been serving as its chairman since 1993.

Read: Israel’s No-State Solution in Palestine: How Should the Palestinians Respond?

The appointments of Fattouh and Al-Sheikh were met by protests from smaller PLO parties such as the Popular Front for the Liberation of Palestine (PFLP) and the Democratic Front for the Liberation of Palestine (DFLP), two political parties with insignificant political representation in the Palestinian Legislative Council. The council’s most recent elections were held in 2006, and it was later dissolved by Abbas on December 22, 2018.

Other Palestinian political parties, which have a political representation similar or stronger than that of Fatah, such as Hamas and Islamic Jihad, are not part of the PLO. For years, talks to include them have failed to materialize into an agreement because, partially, they both refuse to recognize Israel – as opposed to the PLO which did so in 1993.

Fatah rejected the PFLP and DFLP’s criticisms of appointing Al-Sheikh and Fattouh, noting that it has the majority in the Central Committee. This is true but is only so because other parties did not join in the election yet. Hamas won 76 out of 120 seats in the PLC election in 2006 while Islamic Jihad refused to run as it considered the election part of the Oslo Accords between the PLO and Israel, which it refuses. In the Oslo Accords, the PLO recognized Israel as a state and Israel recognized the PLO as the sole representative of the Palestinian people.

Read: The Decisive Israel-Palestine Battle under way in Africa

Islamic Jihad is more popular than many of the small parties in the PLO. In fact, some PLO  factions are outdated to the extent that the head of the DFLP, Nayef Hawatmeh, has been the general secretary of the Democratic Front for the Liberation of Palestine since 1969.

Palestinian factions, including Hamas and Fatah, agreed to have elections for the local councils, the Legislative Council, and the PLO’s National Council (PNC) in May 2021. However, under the claim that there can be no election without Jerusalem, the PA president decided to call the elections off at the end of April of the same year.

Palestinians were deprived of any form of elections to choose their representatives both in Palestine and the diaspora. In practice, the Palestinian Authority has become the official body that represents Palestinians while it was only meant to prepare them for statehood under the umbrella of the PLO.

Israel’s Army Minister Benny Gantz: “Palestinians in the future will have an entity not a state.”

Meanwhile, Israel’s Army Minister Benny Gantz told the Munich Security Conference on February 20, 2022, that Palestinians in the future will have an entity not a state, and this entity should respect what he called the “security needs of Israel.” He added, “Eventually we will find ourselves in a two-entity solution, in which we respect Palestinian sovereignty and governance, but we will be respected for our security needs.”

The majority of the world, all Palestinians, and many Israelis know that a Palestinian state, which the PLO created the PA to prepare Palestinians for, will not see the light anytime soon – if at all. What we have today on the ground is a Palestinian entity, which does not represent all Palestinians, both in the West Bank and the Gaza Strip, and which has practically swallowed up the PLO, its own umbrella organization.

Palestinians today rarely hear of the PLO and its institutions, and the younger generation has little idea about its structures, roles, and bodies. In light of the PLO not including other major parties, for many Palestinians – although some still view the PLO as the representative of the Palestinian people – it is an inactive body which is only brought and pushed to the agenda when the PA needs it for the sake of galvanizing legitimacy.

The PA gaining legitimacy from the PLO included inviting the PNC to be held in Gaza in 1996 after nearly five years (it had last been held in 1991), and after abrupt sessions over the 1970s and 1980s. The goal was to nullify important articles in the PNC’s charter to make it consistent with the Oslo Accords, such as recognizing Israel and denouncing violence. Since then, the PNA was held in 2009 and 2018, but was boycotted by the major Palestinian parties with the exception of Fatah.

The question is what is the point behind sticking to Oslo, which has made Palestinians more divided and has deprived Palestinians both in Palestine and the diaspora of representation? More so, this entity has failed to prepare Palestinians for statehood and has practically swallowed up the PLO, its own umbrella organization. This is especially true in light of repeated Israeli statements that there will be no Palestinian state.

The PA and the PLO, having a blurry relationship. to the extent that it not possible to distinguish the two bodies, might indirectly push other Palestinian parties, including critical voices within Fatah itself, to take actions to ‘reclaim’ representation, which will only leave the Palestinians move divided. The PLO, the sole representative of the Palestinian people, should take moves to reform the organization especially in light of Israel’s insistence not to grant the Palestinians a state of their own.